Home » What's on » An Creative Debate on State Surveillance

An Creative Debate on State Surveillance

‘Following on from the success of their first open discussion event ‘The Fear of The Immigrants’ – The second Hubb Debate looks at another thorny issue that has ammassed inumerable column-inches over recent months – State Surveillance.

Questions posed to the audience will include:

Do recent revelations of mass interception of private digital communications suggest we are now living in a Surveillance State?

Do anti-radicalisation policies such as ‘Prevent’ obligate us all in spying on students, colleagues & neighbours?

Does state surveillance assist in maintaining civil liberties, or is it a tool of repression that hinders free speech?

This event is brought to life by Soul City Arts, whose director and founder, Mohammed Ali said:

Often the voices most heard, belong to those who shout the loudest, or have the biggest platform. This must change. We are offering a platform to all, creating safe and neutral spaces for us to have difficult conversations and present them in extraordinary forms. 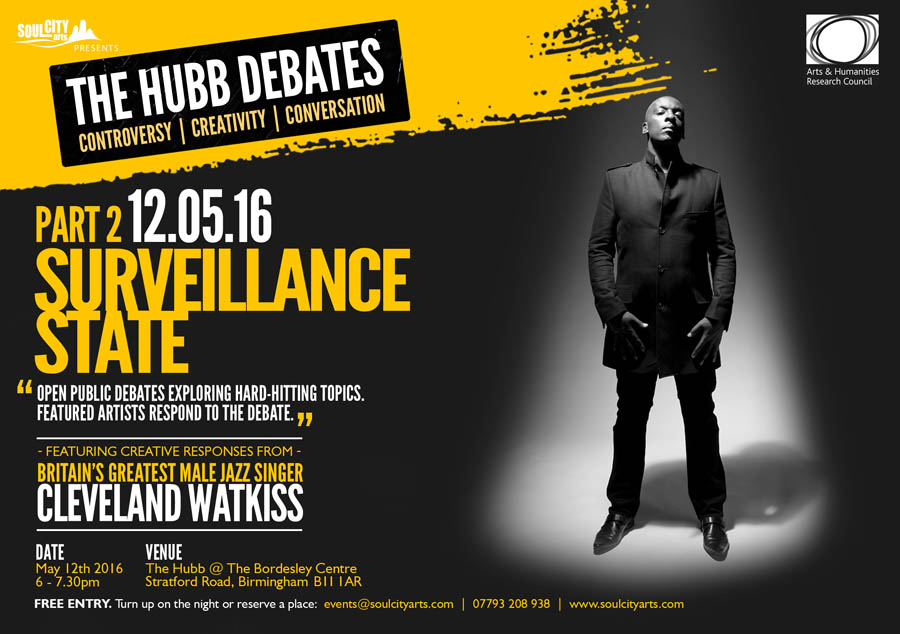 The second in a series of such events sponsored by AHRC’s Cultural Exchange Scheme, ‘The Hubb Debates’ explore hard-hitting topics and are open to artists and members of the public

Where?
Hubb, The Bordesley Centre, Stratford Road, Birmingham, B11 1AR