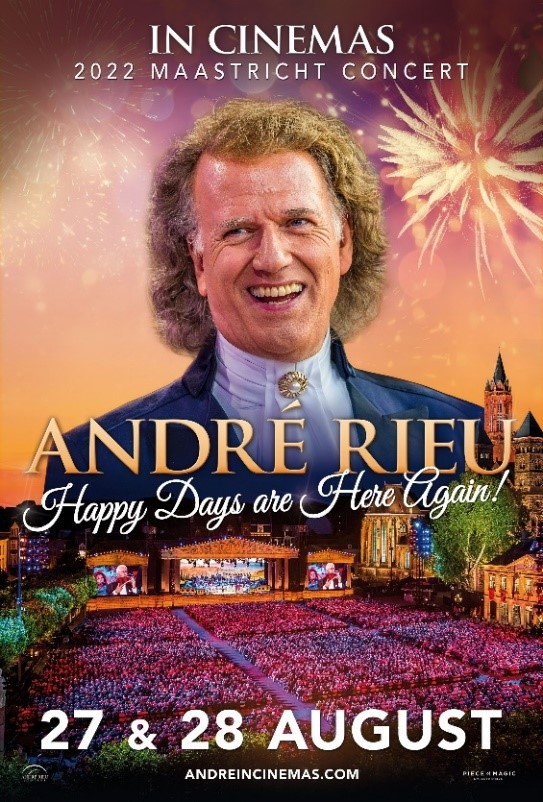 Dust off those dancing shoes – after two long years, cinema’s biggest music event is back!

Maestro André Rieu will present his brand-new summer concert, Happy Days Are Here Again, against the backdrop of the stunning Vrijthof Square in his beloved hometown of Maastricht.

Presented by Piece of Magic Entertainment, Happy Days Are Here Again will be summer’s blockbuster cinema event, shown in over 500 cinemas across the UK over the weekend of 27th and 28th August 2022.

No other artist can make an audience laugh, move them to tears and pull on their heartstrings quite like the King of Waltz. Thanks to the enchanting sounds of his violin, alongside his renowned Johann Strauss Orchestra, with whom André has been performing for over 30 years, Happy Days Are Here Again guarantees to be a magnificent open-air concert featuring popular feel-good classics, show-tunes, and of course, joyous waltzes.

André commented: “There is no other joy like performing my summer concerts in my hometown Maastricht, with my orchestra. I am thrilled to be back in August after 2 years and to share music and love with all the fans again in cinemas! I really miss those happy days. I am excited the wait is finally over!”

With special guests and world-renowned sopranos and tenors, the concert will be hosted by ITV Good Morning Britain’s Charlotte Hawkins, who will take you behind-the-scenes for exclusive access and share an exclusive stage-side interview with André.

André’s cinema events have broken box office records and have brought fans together from all over the world – an unforgettable cinema experience like no other!

Known for his energetic and festive live performances and with album and DVD sales of more than 40 million worldwide, André is the world’s leading pop classical artist and consistently appears on the worldwide list of highest-grossing touring artists.  His Johann Strauss Orchestra, with up to 60 musicians, began in 1987, and for over three decades his spectacular live shows have gained him hundreds of thousands of fans from all over the world.

About Piece of Magic Entertainment

Piece of Magic Entertainment (POM) is an international theatrical distribution company bringing high-caliber content to cinemas around the world.

Established in 2017, we specialize in content, ranging from prestige documentaries through to world-class concerts, that demands to be seen on the big screen. From our offices in Amsterdam and London, Piece of Magic’s in-house sales, marketing and operations teams oversee each international theatrical launch across our wide cinema network, consisting of both multiplexes and arthouse cinemas. Depending on the title, we can release in a handful of territories or branch out much wider with a reach of thousands of screens across 90+ countries. We are a centralized operation that implements customized and closely nurtured campaigns in each market.

POM’s past slate includes Todd Douglas Miller’s award-winning box office sensation Apollo 11, David Attenborough’s feature documentary A Life On Our Planet, Dan Lindsay and TJ Martin’s Tina, Nick Broomfield’s Marianne & Leonard: Words of Love and the current slate includes the critically acclaimed The Alpinist and The Lost Leonardo. POM is the proud distributor behind the global box office sensation André Rieu, releasing his concerts each year into cinemas around the world. Piece of Magic Entertainment is the parent company of the all-rights distributor POM Benelux.