It’s time to start shaking off the winter blues ready for the year ahead, and how better to keep warm, than dance the night away to some of the incredible live musicians and DJs which will be performing in Birmingham throughout the month of February.

Without further ado, here’s just a small selection of top music events happening in a few of our favourite venues this month:

Diverse jazz funk band 40Z Of Groove return to this superb jazz/funk venue in the centre of town. Not to be missed. Support cones from regular Yardbird DJs.

Suzanne Vega came to be regarded as the vanguard of a new generation of female singer/songwriters, with songs such as Marlene on the Wall, the Grammy nominated/MTV award winning Luka, and the hugely successful album Solitude Standing.

Her career received an extra boost in the early 90s when UK-based dance duo DNA released a remix of a cappella song Tom’s Diner, which charted worldwide. Her music has inspired the likes of KT Tunstall, Tracey Chapman, and Alanis Morrisette.

Don’t miss the pioneering American singer/songwriter as she celebrates the release of her new album at Town Hall.

In the main room, it’s a label who can do no wrong at the moment, Bristol’s ‘FUTUREBOOGIE’ who’ll be celebrating their Birthday with one of the hottest names in house music MAXXI SOUNDSYSTEM alongside label bosses EL HARVO & JOE90… You can expect the best, forward thinking house and disco music on one of the finest soundsystems in the city.

For all the bass heads out there, the small room is under the spell of two legends of bass music…DADDY G (MASSIVE ATTACK) & DON LETTS ( 6 MUSIC), there is no denying that this pair have been a driving force In UK bass music and continue to push boundaries via their productions and radio shows. You can expect the duo to take you on a journey of reggae, roots, dub, hip hop, funk and everything inbetween.

Based in North London, Shy Nature are a four-piece alternative rock band. Mixing elements of jangly sixties songwriting with the influence of more recent New York garage groups, they create timeless guitar-driven music centred lyrically around growing up. Rasping organ, revolving guitar lines and singer William’s distinctive vocals propel their energising live show. The band are excited and focussed on what comes next and are set to hurtle into 2014 with a UK tour.

London Grammar continue to prove just why they’re one of the most exciting new bands to breakthrough in 2013 as their debut album, If You Wait, entered the UK album charts at number 2.

TOY, who released their second album, ‘Join The Dots’, on Heavenly Recordings on Monday 9th December 2013, have announced details of a U.K. and US  tour for next year. They recently announced their biggest U.K. show to date, at London’s Shepherd’s Bush Empire in April and will be stopping off at The Rainbow in February.

Cutting edge dance music brought to you by FACE fanatics.

Manchester’s finest ethio-trad, folk-hop & barrelhouse-pop exponents have the skill, charm and (frankly) tunes to pull it all together into a joyful, foot-banging sound, accompanied by local musician Mendi who has performed with stars such as Peter Gabriel and Pandit Shalil Shankar.

The Dear Hunter is an American progressive rock act, currently touring Europe with Anthony Green. It will be the first time overseas for The Dear Hunter, who just finished a full US headlining tour supporting their latest album Migrant. Green will be releasing his new album titles Young Legs this November.

“Skaters know just how to encapsulate that classic lo-fi garage pop sound that many can only hope to achieve.” – Indie Shuffle 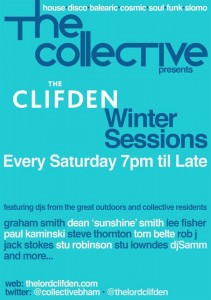 The UAB Collective residents, alongside the Great Outdoors residents will be keeping the party going every Saturday throughout the winter months in the famous Lord Clifden garden. Fully heated, outside bar, BBQ & selection of Birmingham’s residents will see out 2013 and continue the Clifden’s party until the New Year & beyond.

Every Saturday from 7pm, get your dancing shoes on, keep the dancfloor warm & get down with a host of local DJ’s, fine music, food & winter wonderland partying.