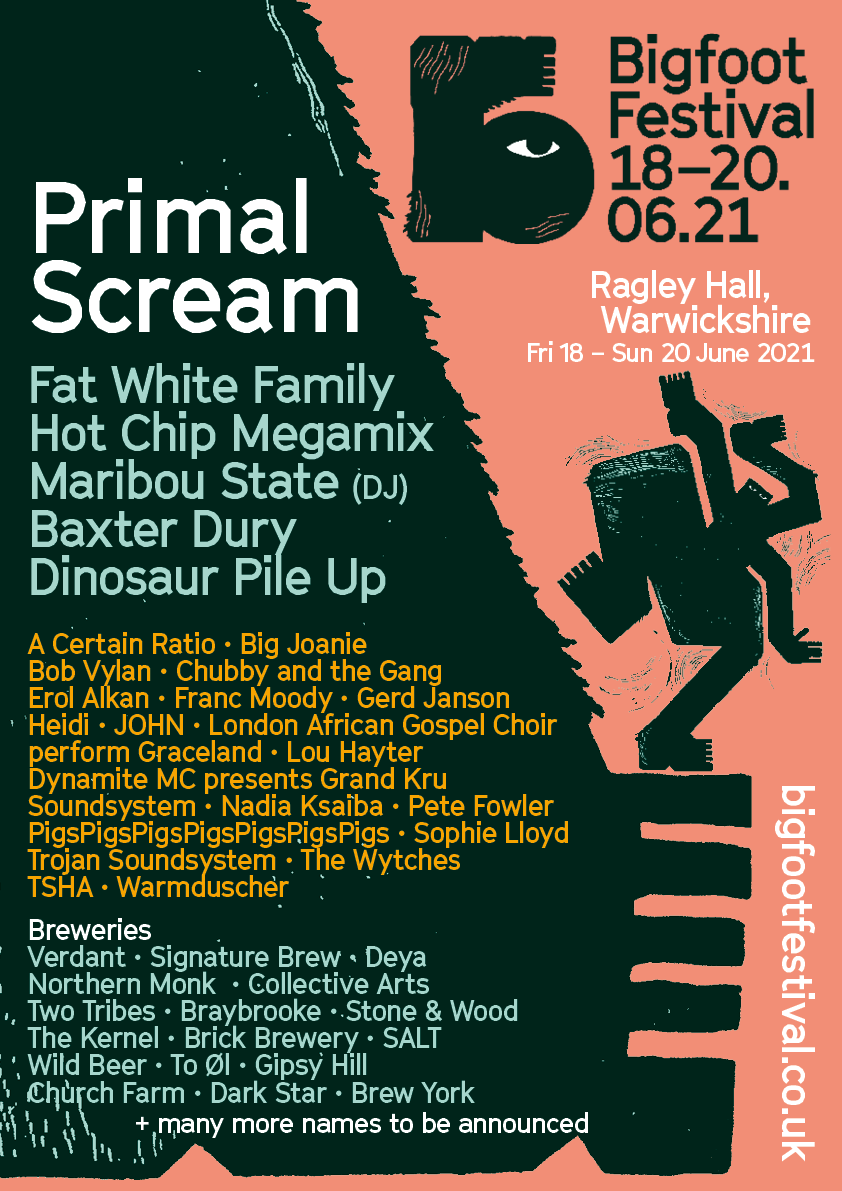 Bigfoot is the UK’s first ever craft beer music festival: a boutique three-day celebration from 18th – 20th June 2021 that aims to unite the best of the international craft beer scene with iconic headline acts and a selection of the best new bands around.

Hosted entirely outdoors, amongst the sprawling forests, meadows and lake of Ragley Hall, a stately home in Warwickshire, the 7,000 capacity Bigfoot will provide something for everyone with an adventurous music programme, a world-class line up of brewers – including some very special international guests – tantalising food offerings, natural wines, and a carefully curated programme of family events. In short, it’s the perfect destination for the craft curious and connoisseurs alike.

Today brings the exciting news that the festival will be headlined by Primal Scream and Hot Chip Megamix.

Having postponed its inaugural edition last year, Bigfoot is no stranger to the extraordinary and difficult challenges that the coronavirus pandemic poses. Though 2021 may be starting off in equally tumultuous fashion, Bigfoot is committed to providing light at the end of the tunnel and proceeding with this year’s festival with the utmost priority placed on the safety of its patrons.

Co-founder, Greg Wells, says, ‘I can’t think of a better way to recover from COVID, Brexit and Trump, than for us all to get together in the great outdoors at the height of English summer time, drink locally-made world-class beer, and watch one of the all time great bands.’

Blending swaggering rock ‘n’ roll attitude with dancefloor friendly rhythms, Primal Scream are the perfect band to ignite a thrilling festival fervour. Fronted by Bobby Gillespie, the band have a rich catalogue of absolute classics – ‘Movin’ On Up’, ‘Loaded’, ‘Rocks’, ‘Country Girl’ and many more.

Meanwhile, Hot Chip will be putting an innovative twist on their euphoric electro-pop with their groundbreaking Megamix set. The band behind iconic tracks such as ‘Ready For The Floor’ and ‘Over And Over’ will blur the conventions of a DJ set by adding live sound and instrumentation to create a fascinating and fresh festival experience.

Meanwhile, Signature Brew will bring their music-inspired craft beers to Bigfoot by hosting a punk stage. The east London brewery has built a reputation for hosting buzzy live events. The stage will be headlined by Brit alt-rock favourites Dinosaur Pile-Up, who will be joined by the visceral Pigs Pigs Pigs Pigs Pigs Pigs Pigs, cult favourites The Wytches and hotly-tipped punks Chubby & The Gang, Big Joanie and more.

To complete a diverse line-up of music for all tastes, Bigfoot will host a dance area in the adjacent woods. It will feature new house and techno from Jackathon party starter Heidi and crate-digging deep cuts courtesy of Running Back co-founder Gerd Janson.

Presented by We Are Beer, the team behind the much-loved London, Bristol, Edinburgh and Birmingham Craft Beer Festivals, Bigfoot’s forward-thinking craft beer line-up is just as essential as its music.

Hailing from Falmouth, Verdant specialise in juicy, hoppy, hazy beers that are big on taste, quality and all-round deliciousness. They will also be offering a one-off session pale ale exclusively for Bigfoot which will be available at every bar at the festival, and will also bring their seafood bar and a sound system playing dub and reggae.

In a UK festival first, one of the world’s most renowned breweries, Hill Farmstead, will be visiting from Vermont, USA. And coming all the way from Byron Bay in Australia, Stone & Wood will be bringing one of the best summer drinking beers on the planet in the shape of their Pacific Ale.

Not to be outdone, the UK will also be represented by the renowned DEYA along with The Kernel Brewery from London and Northern Monk from Leeds. Meanwhile Braybrooke Beer Co. will be cooking up something special with Soho’s favourite neighbourhood restaurant 10 Greek Street.

All drinks will be served in a beer tent hosted by The Gun. Based in Hackney, The Gun’s mix of authentic, old school atmosphere and exemplary independent beer has made it one of the most adored pubs in London.

Bigfoot is operating a watertight COVID secure protocol which includes:

Standard adult weekend tickets include camping and are priced at £120.

Groups can buy four tickets for the price of three: £360.

Youth weekender tickets (ages 13-17) are available at an early release price of £80, while child tickets are free.

A payment plan offers the chance to spread the cost of a ticket over the course of a down payment plus four instalments. All ticket prices are subject to booking fees.

Bigfoot are well aware that in these unique times things change very quickly. If the worst happens and the event is forced to cancel a full refund policy is in place.