BINITBAB brings together the local community to clean up Digbeth 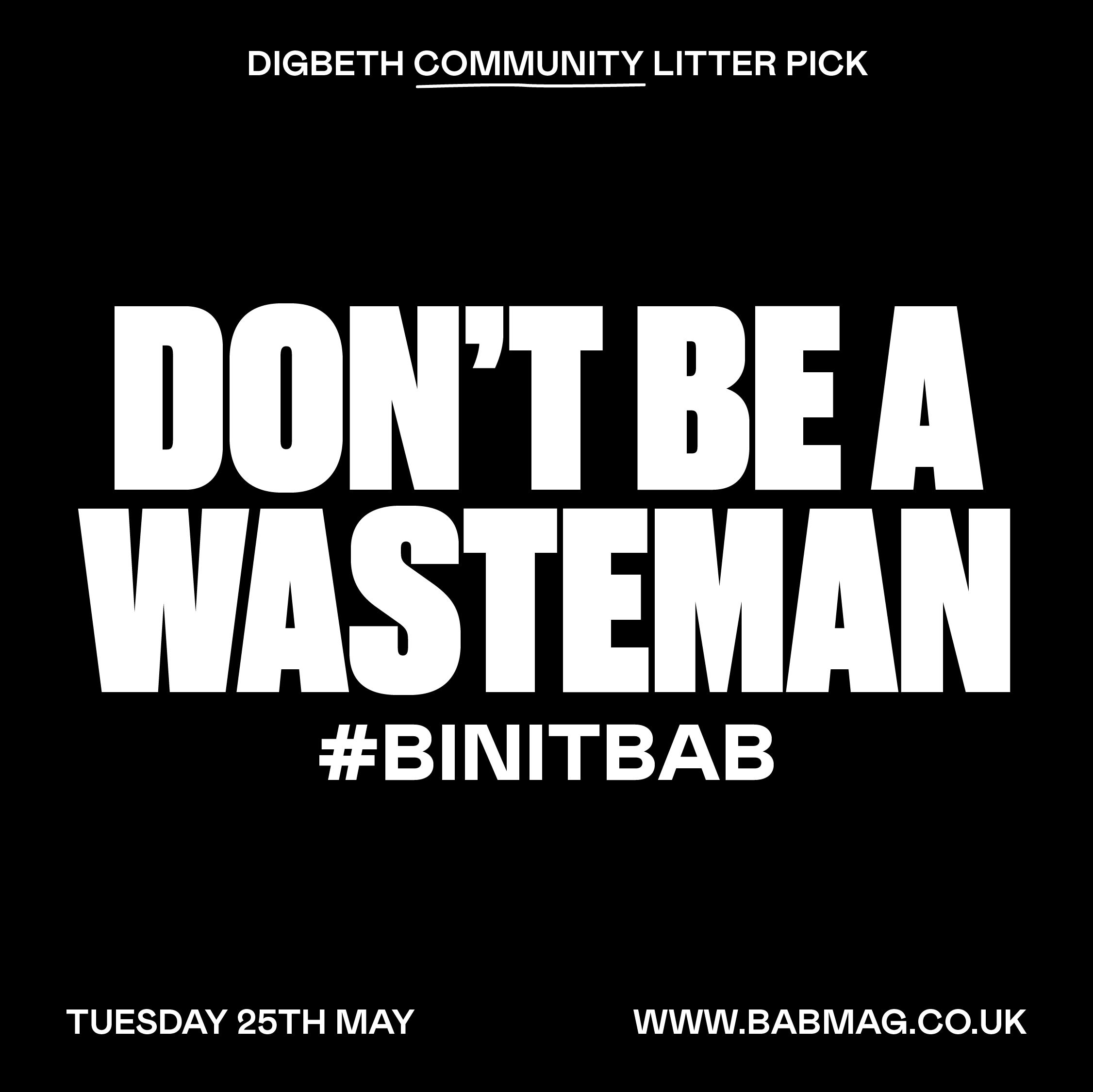 The teams behind BAB MAG and Shiny People Events have joined forces in a fight against the increase in litter on the streets of Digbeth, with a community litter pick due to take place on Tuesday 25th May. A call out has been made for volunteers and residents of Digbeth and the surrounding areas to take part in a collective effort to clean up the streets.

Residents of Digbeth are becoming increasingly frustrated with the growing waste problems that are persisting in the area, and with other local clean-up projects in the city achieving great cohesion in their communities, much needed action has to be taken against what is becoming an eyesore to the thriving creative districts in Digbeth.

BINITBAB is also seeking the support of local businesses to get behind the campaign, to make a stand against the worsening litter issues and ensure a long lasting impact into the future. The rise in nightlife venues and urban development in the area has breathed a welcome sense of prosperity into Digbeth after what has been a difficult year for the city, however, the much loved streets and pathways in Digbeth have suffered as a knock on result of visitors and businesses not playing their part.

Amy Cobb, Director of Shiny People said “Having lived and worked in Digbeth now for over 7 years I’ve seen a gradual increase in the litter problem, the streets are often scattered with NOS canisters, food packets and cigarette butts. After having multiple conversations with friends we decided it was time to try and take action. Since launching on the 10th May we’ve had an outpouring of support from local businesses, clearly this has been a growing issue for many people. I’m hopeful we can make a big impact and I’m looking forward to implementing the campaign throughout Birmingham if all goes well.”

BAB MAG (Birmingham & Beyond) is a culture and lifestyle magazine and online platform formed in collaboration with creatives in and around the city. It serves to showcase local talent, document subcultures and explore the heritage of our second city.

Volunteers will meet at Mama Roux’s, Lower Trinity Street at 5:30PM on Tuesday 25th May. Bin bags, hi-vis and pickers will be provided with a map of designated areas to all involved. Covid guidelines will be adhered to as the team split into smaller groups. Future picks will take place on Tuesday 15th June and Tuesday 6th July.