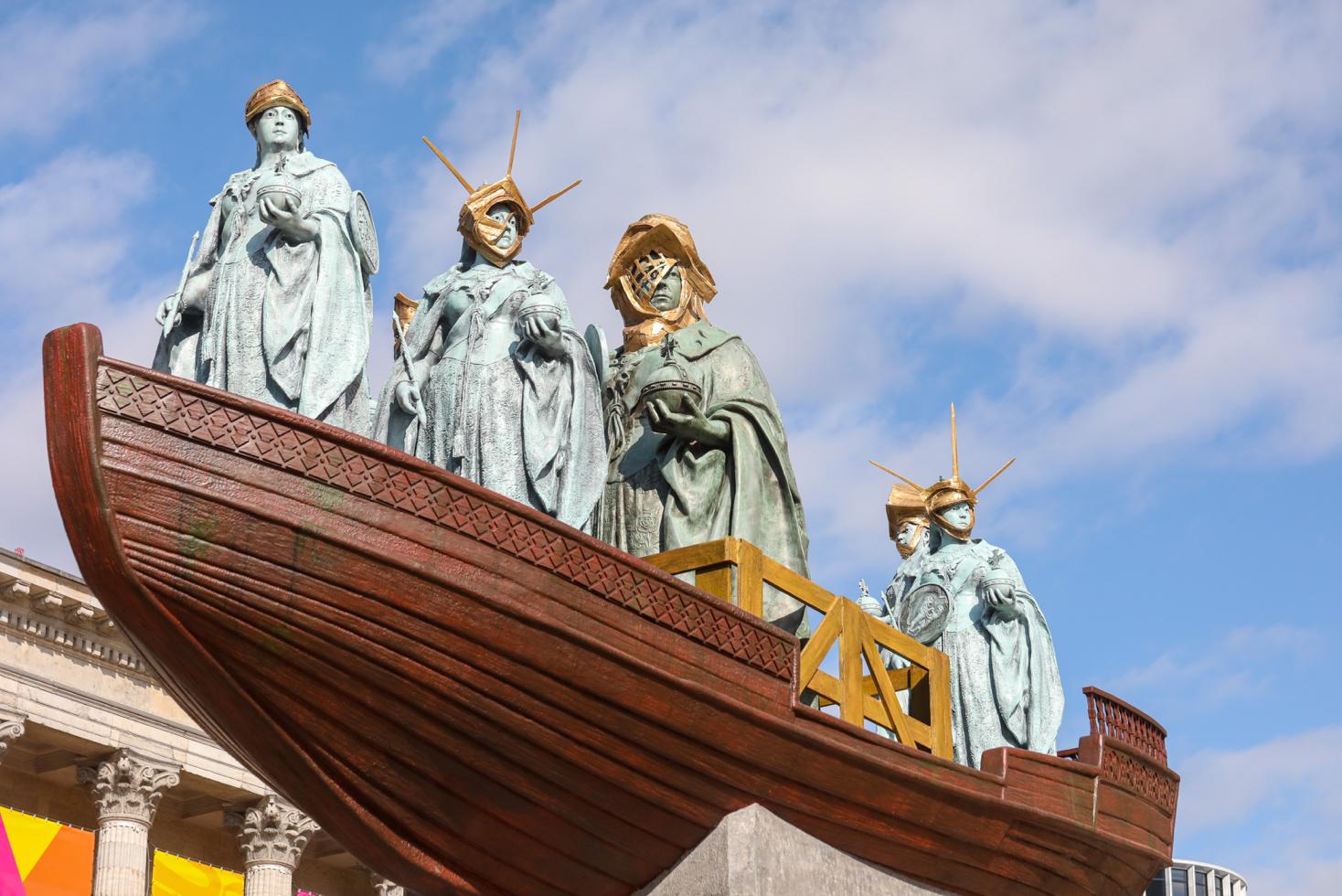 Launched today, Birmingham’s city-centre sculpture of Queen Victoria has been reimagined by acclaimed Guyanese-British artist Hew Locke. Presented by the Birmingham 2022 Festival and commissioned by Ikon, Foreign Exchange will remain on view through the summer and during the Birmingham 2022 Commonwealth Games. This temporary work is seen within the context of a wide-reaching festival of performances, events and projects which all consider our place in the Commonwealth, the present moment and stories of Birmingham and the West Midlands.

Originally unveiled in 1901, Sir Thomas Brock’s marble figure of Queen Victoria was recast in bronze by William Bloye and members of the Birmingham School of Art for the Festival of Britain in 1951. Seventy years on, Locke draws attention to the original craftsmanship of Brock and Bloye, meanwhile bringing a diverse social and historic focus to a Birmingham heritage asset. A monument overlooked by passers-by, it is brought into the twenty-first century to become a significant contemporary artistic gesture.

Reaching over seven meters high, Foreign Exchange wraps around the existing Queen Victoria statue, preserving its original state. Depicting a boat carrying five smaller replica statues of Queen Victoria, each figure wears a helmet, reminiscent of that worn by Britannia, and a replica medal signifying an important battle in the history of the British Empire. Exploring the symbolic power of public monuments, Locke’s vision is to create “an iconic image, leading a cohort of other statues to represent the home nation throughout the Empire”. Locke often uses titles that can be read in different ways; Foreign Exchange might remind us of the exchange of cultures, wealth, labour and DNA that happened during the Empire – all of which continue across the Commonwealth today.

Born in Edinburgh in 1959, Locke lived in Georgetown, Guyana, from 1966 to 1988 before returning to the UK. His interest in the power of statues originates from his childhood in Guyana where he passed a sculpture

of Queen Victoria every day on the way to school. Whilst he has been reimagining historical statues for twenty years, Foreign Exchange is Locke’s first temporary public sculpture. His detailed preparatory sketches, made during his solo exhibition at Ikon Gallery in 2019, formed an important departure point for the project.

Located in Birmingham’s Civic Quarter, Foreign Exchange enhances the monument’s role as a place of discussion and celebration for the city and its visitors. Running alongside the project, the Birmingham 2022 Festival and Ikon are offering extensive public engagement and education programmes, including free creative learning activity packs for schools, guided tours, workshops and a school’s showcase celebrating artworks by pupils from local schools responding to Foreign Exchange. Locke will also take part in an In Conversation with curator and cultural historian, Gus Caseley-Hayford, at Birmingham Cathedral on 14 July.

“The culture in the UK today is a result of centuries of foreign exchanges, including across the former Empire. In this work, I was keen to make something that was relevant to all the people of Birmingham, and to people visiting the city for the Games. Representations of Victoria are scattered across the UK, and also existed in every country represented by athletes at the Commonwealth Games, enabling them to engage directly with the artwork. More personally, this project is the realisation of a long-held dream for me, and a continuation of my engagement with the city of Birmingham.”

“Hew Locke adds an important voice to the honest conversations we want audiences to have through the festival this summer as we welcome the Commonwealth Games. Foreign Exchange is an artwork that has been in the making for a long time, well before contemporary discussion about statues surfaced, and we’re excited to be realising his long-held vision alongside Ikon, to show that now is the time and Birmingham is the place that can engage the world with thought-provoking, brave and awe-inspiring public art.”

“Once again, it has been a privilege for Ikon to share an adventure with Hew Locke – a long journey, especially for him, towards the realisation of an artwork located in the public realm that raises important questions concerning those we see, out and about, elevated as statues. Typically, he is touching on serious subject matter, very relevant now, with wit and grace.”