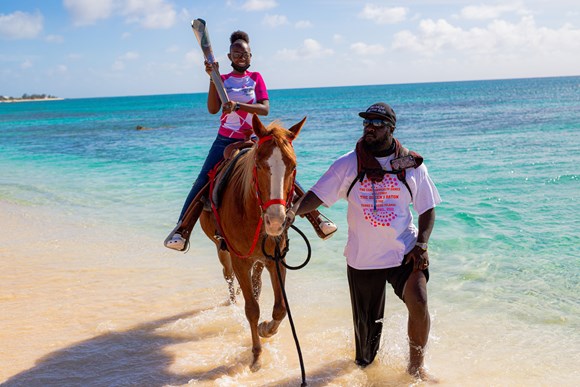 25 April 2022, marks the 200th day of the Birmingham 2022 Queen’s Baton Relay, with recent visits to nations and territories in the Americas and the Caribbean, including Belize, Guyana, Grenada, The Bahamas, Turks & Caicos, the Cayman Islands, Jamaica, Trinidad and Tobago, and Barbados.

The Relay officially began its 294-day long journey on 7 October and is currently visiting all 72 Commonwealth nations and territories, bringing cultures and communities together in the lead up to Birmingham 2022.

When each Commonwealth Games Association hosts the Queen’s Baton, it organises an impressive schedule of events to celebrate their local heroes, untold stories, and sustainability efforts.

In Belize, the Baton visited the Xunantunich Maya Temple, an Ancient Maya site, where Belize National team EK Balam showcased their skills in Pok-Ta-Pok, a game in which they are three-time world champions.

Giovanni Alamilla, Vice President of Belize Olympic & Commonwealth Games Association, explained that Pok-ta-Pok “is played by striking a five-pound rubber ball with the hips with intentions of getting it over the opponent’s side, if successful, the team is awarded five points. No hands or chest are allowed to touch the ball, that would result in the opposition gaining points.”

When the Baton was in Guyana, Batonbearers walked amongst the treetops along the 30-metre-tall suspension bridges, which form the Iwokrama Canopy Walkway. The forest is home to a variety of monkeys, sloths, and birds. During the Relay, firefighter and Guyana’s first para-athlete Walter Grant-Stuart took the role of Batonbearer.

The Baton was plunged underwater at St George’s Harbour in Grenada as it visited the Molinere Underwater Sculpture Park, featuring life casts of members of the local community. The sculptures are made from artificial reed to promote coral growth and aquatic sustainability. At La Sagesse Playing Field in St. David, Ishona Charles, javelin thrower and Grenada’s first international para-athlete, carried the Baton with pride.

In The Bahamas, the Baton was taken to the Thomas Robinson Stadium where members of the Bahamas Association of Athletic Associations relayed the Baton. Vashni Thompson and Austin Green were among the athletes who carried the Baton around the stadium.

When the Baton visited Turks & Caicos, community activist, Velma Gardiner, and student Archelande Joseph carried the Baton to Isaac Organic Farm, which aims to provide fairly priced produce and new jobs for members of the community.

While in the Cayman Islands, which marked the 50th destination, the Baton was taken to visit schoolchildren, hospital staff and medical centres, as well as the local wildlife, including stingrays and turtles. The Baton also visited West End Primary School and Layman E. Scott High School, with the head boy and girl proudly taking on the role of Batonbearer to represent their schools.

The Baton was taken to visit Donald Quarrie High School in Jamaica, where namesake and athletics legend Donald Quarrie carried the Baton and delivered an inspiring speech to staff and students.

In Trinidad and Tobago, 19-20 April, the Baton toured picturesque coral reefs, such as Buccoo Reef and Nylon Pool, which was named by Princess Margaret, Countess of Snowdon in 1962.

Batonbearers relayed the Baton around all 11 regions of Barbados between 23-24 April, visiting landmarks in each, including the Morgan Lewis Windmill in St John, which is one of the only two working sugar mills remaining in the world. For some Batonbearers, carrying the Birmingham 2022 Queen’s Baton as adults was even more special as they had carried a previous Commonwealth Games Queen’s Baton as young children.

Lisa Hampton, Head of the Queen’s Baton Relay, said: “It is incredible that we’ve reached the 200th day of the Queen’s Baton Relay, having just visited Barbados. The nations and territories that have hosted the Baton so far have done a brilliant job at showcasing their culture and communities. It was amazing to see so many people, from schoolchildren to doctors and nurses, engage with the Baton in the Cayman Islands, our milestone 50th destination.”

Sandra Osborne, SCM, QC, President of the Barbados Olympic Association, said: “It was a wonderful experience to host the Queen’s Baton as the Relay approaches its 200th day. Our Barbadian Batonbearers did a fantastic job of representing our country! I know they felt so proud to represent our nation in this special tradition.”

“There’s a connection between living on the island, our oceans, and our culture, and that’s why marine conservation is important to me. By helping to preserve my culture, it also helps to preserve the environment. I hope by taking on the role of Batonbearer I have been able to create awareness for the conservation of the environment and my culture.”

The Queen’s Baton will arrive back in England on 2 June 2022 for a four-day visit to London, coinciding with The Queen’s Platinum Jubilee Central Weekend, before resuming the international journey. It later returns to England on 4 July to commence a 25-day tour across all remaining regions.