Birmingham Independent Food Fair is back, with organisers adding an extra day to take the festival across the weekend of 12-13 September.

The event is dedicated to showcasing Birmingham’s independent food and drink sector, which has seen the addition of many new restaurants and bars in recent months. 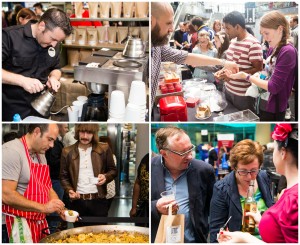 Millennium Point will be the setting for a larger gathering of sixty local food and drink businesses, ranging from restaurants to drinks merchants to street food traders.

Local experts like Phil Innes from Loki Wine will host a programme of tasting sessions, offering visitors the chance to learn more about the food and drink on offer.

Restaurants planning to join this year’s festival include Amantia, a family-run Spanish tapas restaurant that opened earlier this year on Bennett’s Hill in the city centre.

As well as growing into a two-day event, the fair will expand across into Eastside Park, with more outdoor stalls and a communal dining area planned to create a street party atmosphere.

Live music by local artists will entertain visitors, while a host of street food traders including soul food specialist Big Papas prepare and dish out food in the open air.

Also signed up to the festival are The Penang Laksa Co, a new Malaysian street food concept serving up authentic soup, salad and noodles by chef Nick Shrimpton.

Craft beer from across the West Midlands region will be on offer at the expanded bar area, which will also house a cocktail theatre and wine bar.

Bakery, confectionery and deli food is also expected to feature strongly, with BAKE, Kneal’s Chocolates and All Greek Delicatessen already on board.

The festival is organised by Dine Birmingham editor Ahmed Ahmed, who is this year joined by Amy Seton, known for organising the annual Whisky Birmingham festival.

An improved festival for all

We’re really excited to be bringing the independent food fair back for a second year, and this time it will be bigger and better than ever.

Last year we were taken aback by just how popular the event was, to the point that some stalls were overstretched and ran out of food. This year we have streamlined and fixed the format to make sure there is plenty to go round, and everyone has a brilliant time.

Nearly 2,000 local food and drink lovers descended on Millennium Point for the initial one-day event in 2014.

Capacity this year will double to 4,000 tickets spread over the weekend of Saturday 12th and Sunday 13th September.

Tickets will be released in June, while more info is available at www.bhamindfoodfair.co.uk

Businesses wishing to take part in the festival can apply at www.bhamindfoodfair.co.uk/traders