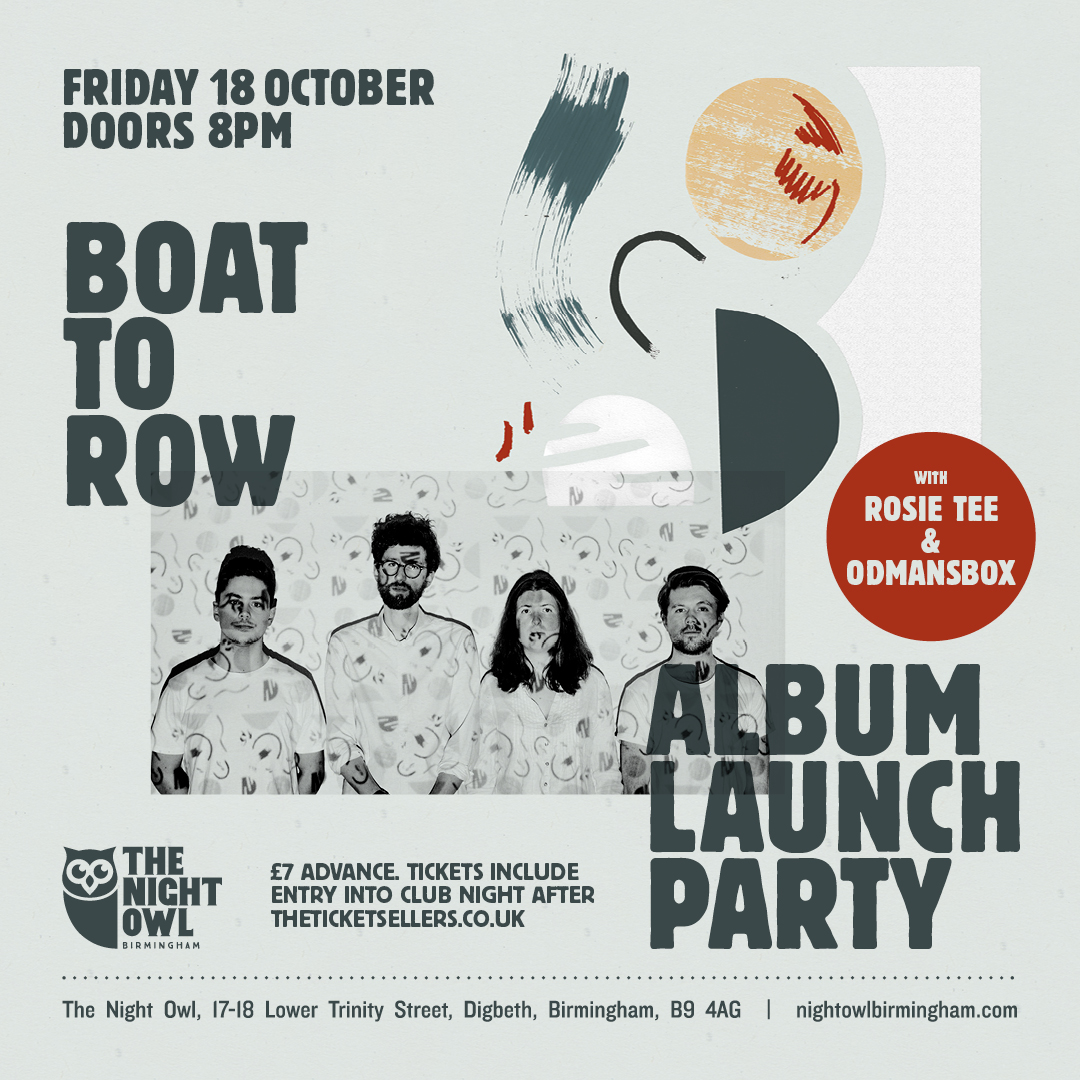 Celebrated Birmingham folk outfit Boat To Row are set to launch their newest record ‘Rivers that Flow in Circles’ with an exclusive performance on Friday, October 18th at Birmingham’s The Night Owl. This will kick start a headline UK tour for the quartet, who then go on to play London, Gloucester and Nottingham throughout the month.

Boat to Row are known in Birmingham and beyond for delivering intricate sets, woven tightly with strings, guitar melodies and vocal harmonies that are layered to create a rich tapestry of work. Michael King, Ben Gilchrist, Lydia Glanville and Dan Cippico combine their multi-instrumental knowledge with ease to create a skilfully crafted sound, both energetic and balanced.

The album launch party will also see support from the innovative, atmospheric jazz and pop singer Rosie Tee, who takes inspiration from the likes of Björk and Birmingham’s own Laura Mvula. Also joining the line up are Odmansbox, a vibrant and driving trio who are just like their namesake: off-kilter, poker face, joking but deadly serious – a musical knick knack drawer or junk shop.

Boat to Row’s album has already received critical acclaim, BBC 6 Music’s Tom Robinson saying “It’s great to see them back in style” whilast Folk Radio’s Mike Davis called the album ‘Sublime’. ‘Rivers That Flow in Circles’ was initially paid for via crowdfunding, which took an unexpected turn as the platform they used went bust. Undeterred by the bad news and supported by Static Caravan Records, the quartet fundraised again through live performances and social media, and released the album in full on Friday, September 20th.

Guests can hear new tracks ‘Spanish Moss’ and ‘On Your Own’ live for the first time on Friday, October 18th in Digbeth’s award winning soul and retro nightclub The Night Owl. The independently run club has hosted local acts such as Black Mekon, Cherry Pickles, Modern Literature, High Horses and more, as well as hosting popular tribute nights to David Bowie, Prince and Small Faces to name a few. The Night Owl recently won ‘Best Brum Cocktail’ in the Independent Birmingham awards and had the pleasure of having original Oasis drummer Tony McCaroll perform live for the first time in 20 years.

Tickets are £7 and include entry into soul and retro club night Dig? After. Tickets are available from www.theticketsellers.co.uk.