Home » Around The Web » Boxing Day Fixtures We Will Never Forget 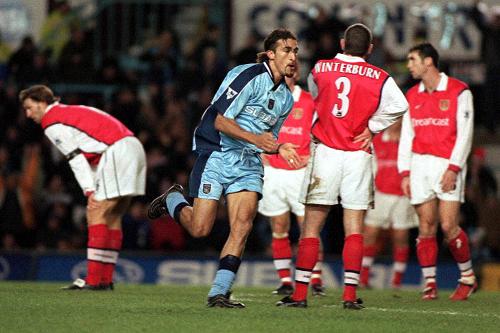 While Boxing Day may just be known as the day after Christmas for regular people, football admirers know it as one of the biggest days in every Premier League season. The Premier League schedule is well congested but you will rarely see the majority of the teams in action on the same day. It happens very rarely. To be more precise, normally twice a year. All teams are in action at the same time on the final day of the season which is reasonable considering the importance of the fixtures, especially if there is a battle for the title, the Champions League/Europa League spots, or avoiding relegation ongoing.

The other day when most Premier League teams are in action at the same time is Boxing Day. It has traditionally been one of the most exciting days of the Premier League season every single year. The 26th of December has thus brought us some truly spectacular affairs throughout history. It is very hard to separate only three, but here are the matches that instantly pop up as the most special Boxing Day affairs in the history of the competition. Do you recall these?

We will start with sir Alex Ferguson’s final season as a Manchester United head coach. The Red Devils entered the Boxing Day fixtures with a two-point cushion on Manchester City at the top of the standings. They hosted Newcastle United at Old Trafford in what turned out to be one spectacular affair. The Magpies had an advantage on three separate occasions but ended up losing 4-3 at the end. Perch pushed Newcastle in front before Jonny Evans leveled the score and then scored an own goal. Patrice Evra then found another leveler for the Red Devils, but Papiss Cisse pushed Newcastle In charge for the third time. Alex Ferguson’s men did not give up as Roin Van Persie found the third equalizer before Javier Hernandez notched the late winner for a magnificent Manchester United comeback on Boxing Day. Manchester City fell 1-0 to Sunderland on the same day, meaning United went on a five-point cushion at the top of the standings.

This was the season in which Chelsea sacked Jose Mourinho in September, as reported by Betting Tips 4 You. The Blues had won the Premier League title in style in the 2006/07 campaign but got off to a poor kick-off to the new season as the board decided to part ways with the Special One. Just as they were getting used to life without the Portuguese manager, Chelsea were part of one of the most tremendous games of the entire season. We all know Mourinho as a defensive-minded manager who extremely disliked teams that fancied offensive football. The Special One hated big-scoring games and teams.

However, Chelsea naturally shifted their playing style under new manager Avram Grant. One such came just on Boxing Day in 2007 when Aston Villa came to visit Stamford Bridge. Chelsea has been massive favorites going into the tie with a squad that has just won the league title in the previous campaign. However, Aston Villa got off to a dream kick-off in London, getting an early 0-2 lead. Nevertheless, their Zat Knight was sent off soon after the Lions found the second goal, opening up the way for the Blues to respond quickly. They did so through Andriy Shevchenko who bagged two goals in quick succession. Chelsea then gained momentum as Alex put them in front for a 3-2 lead. With 18 minutes to play, Villa found another goal to make it 3-3. The playing field was then leveled as Ricardo Carvalho received a red card for Chelsea. However, it did not prevent Michael Ballack to score a stunner from the free-kick just two minutes from time. When everyone thought that Chelsea caught the win in the dying minutes of the affair, Ashley Cole was called for a handball in his penalty box which resulted in a red card and a new equalizer for Aston Villa. The Lions thus got away with a point at Stamford Bridge as Chelsea eventually lost the title being two points short of Manchester United at the top of the Premier League table that season.

Arsenal were keen to return to the throne after Manchester United’s record-breaking season in which the Red Devils won the treble. The Gunners were still in contention for the title ahead of the Boxing Day fixtures but this match against Coventry City completely shifted the entire course of the season for them. Coventry City were struggling badly to escape the red zone and prevent the drop to the Championship football. They had the weakest team in the league back then. However, the Sky Blues still managed a massive 3-2 victory over one of the main title candidates on Boxing Day. It was a genuine miracle that completely shaped Arsenal’s season as the Gunners ended up with a massive 18-point deficit to Manchester United at the top of the standings.