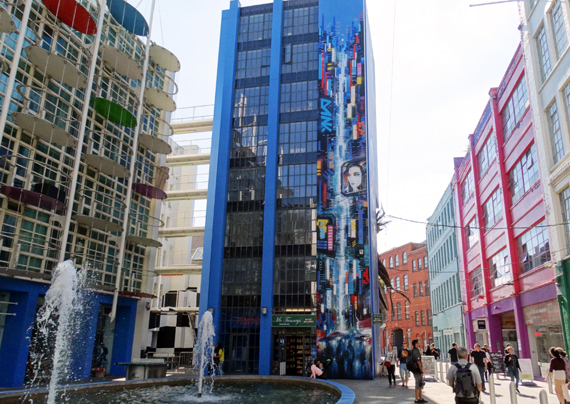 Local Graffiti Art fan ‘Rob Dann’ recently attended the City of Colours Street Art Festival in Digbeth and covered the story on behalf of Grapevine Birmingham. Big thanks to Rob for the following article: 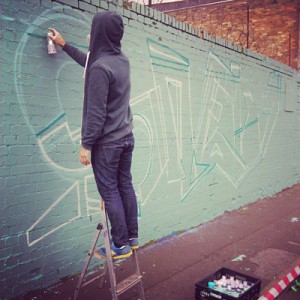 As a fan of street art for as long as I can remember – In my youth I bought the early graffiti publications of Subway Art and Spraycan Art and revelled in such films as Breakdance and Beat Street – September 6th was firmly marked in my 2014 calendar as a date to look forward to.

I’m sure all the planning took place many months prior to my knowledge of the event, but through social media I learned, a few months back, that Birmingham was going to get its own street art festival!

Bristol has its own regular festival called Upfest and the name of ours was to be called City of Colours. The name took a while to grow on me but as I followed its growing campaign on Facebook (and got more excited by the calibre of the graffiti artists they were revealing on an almost weekly basis) I formed my own opinion on the choice of name. 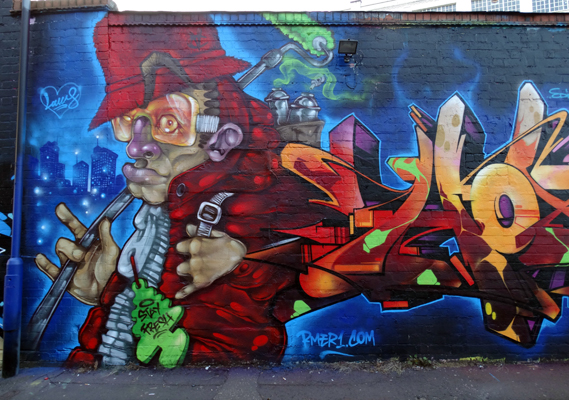 Calling it City of Colours made it feel more welcoming to the general public in my opnion, who might have no real knowledge or interest in the street art scene. This was also shown when one of the organisers, Becci Wright, was outside the Bullring on the weekend before the event trying to garner the interest of the many folks, of all ages, passing by. 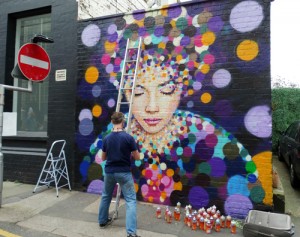 Many were stopping to ask questions and to watch a couple of local artists who were creating murals on temporary boardings. This was going on under the giant paintbrush – that had adorned the roof of the bullring for the last week or two – which hopefully had offered the event attention from people questioning its purpose.

I don’t think they could have done anymore to promote the event and the name suited it perfectly – a festival for all to attend and not just for die-hard fans of the graffiti scene. Now we all just hoped the weather would be fine.

On the morning of the 6th we arrived in Digbeth around 11am – which was the advertised time for the festival to start – but through social media, we knew a few of the larger murals had been started and even completed well before this time. 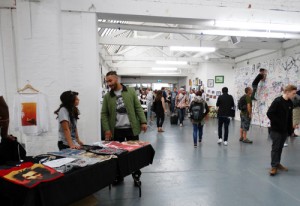 Our first port of call was the giant mural on the side of the coach station by N4T4, a local artist from Nuneaton. He specialises mainly in female portraits in which he also likes to incorporate ethnic and aboriginal art.

This first mural was a little bit away from the main action but being next to the coach station, it’ll probably be the most viewed piece of art by those not specifically attending the festival.

Arriving at the Custard Factory we checked another mural that had been completed in the days leading up to the festival. This one was by DANK, an artist who captures the vibrancy of futuristic metropolises in many of his paintings. He didn’t disappoint with his Birmingham mural. In fact, it was his largest to date and formed the perfect centre piece for the folks who were starting to arrive. 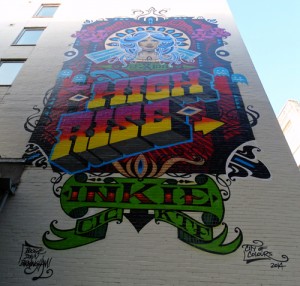 After what, at first, had seemed like a normal Saturday morning in Digbeth, it was soon becoming apparent that there were people arriving en masse to view the artwork.

DANK’s mural is a difficult one to photograph due to it being of a vertical nature rather than horizontal. It rises twenty two metres up the outside of the stairwell, in the centre of the Custard factory, and depicts a futuristic Tokyo bathed in neon and alive to the elements.

Before venturing out to see any of the live painting we had a quick look around the Custard Factory. Maps were provided showing what was going on not just in the venue itself, but also which graffiti artists were painting on different streets and other activities going on, in relation to the festival itself. 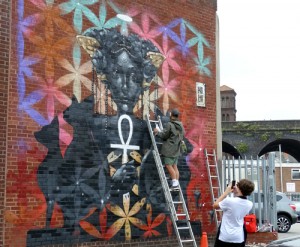 A pop up market had appeared inside one of the spaces inside the complex, selling a lot of the artists’ work on canvases and t-shirts amongst other things.

There was also a graffiti wall for the kids attending to show their artistic flair. It was good to see families out enjoying the day because as mentioned before, I think the festival was correctly marketed in trying to involve all generations and walks of life and not just those who are interested in the graffiti scene.

Alfie Birds – a three level bar overlooking the poolside courtyard – and its neighbouring venue, Oobleck, both had live music on and the theatre/bar opposite them, The Mockingbird, was showing short films. Plenty to see and do but we wanted to get out see the street art. 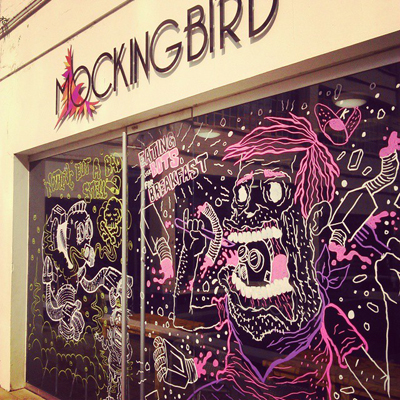 Following the map and guide provided it was easy to find where all the painting spots were. The majority were within a few minutes walk of where we’d started and the highest concentration were on and around the car park of Air nightclub, a two minute walk from The Custard Factory. Here, another huge mural had been completed in the days leading up to festival, by local artists Gent and Newso. Its lettering carries the city’s motto which is “forward”.

It’s difficult to convey in words the immensity of an event like this for someone who is such a fan of the scene but suffice to say, the artwork on display was spectacular. I think though I was more impressed by the variation of styles we witnessed as we walked from one painting site to another, than the amount work that was going on. The organisers had managed to amass 120 artists from all over the UK and further afield to attend that day, so great credit must go to them. 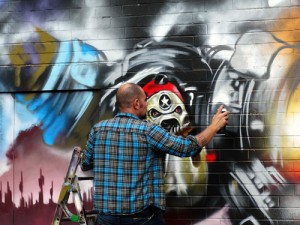 The different styles on show varied from depictions of giant animals to a whole section that was just oldskool 80’s lettering. Every new wall was something ‘new’ and I’m sure in the weeks (and hopefully months) to come there will still be folks walking around the area taking in artwork.

It would be impossible to try and write a review describing everything we saw on that Saturday but it was a very busy day and the crowds were certainly out. It wasn’t all about graffiti either. We had something to eat at the wonderful Digbeth Dining Club – I had the largest hot dog I’d ever seen – and we visited a couple of the bars and pubs nearby which all seemed to be getting in on the act.

The Old Crown’s beer garden was a miniature art gallery with many murals being created on canvas. It was an extremely tiring day due to the crowds, the fantastic weather, the amount of art to see and all the walking so we were on the train home by about 8pm. There was still plenty going on with many events running into the early hours but I wanted to be back down here early on the Sunday. 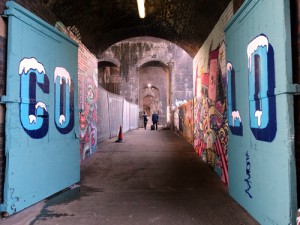 The following day was a much quieter affair. Maybe the festival should have been over two days but I preferred the fact that on the Sunday, you could admire the artwork in peace without the crowds or many sound systems, and attractions that competed for your attention the day before. Two very contrasting days and both of them worked perfectly in tandem to create the street art festival I wanted for Birmingham.

There were many dedicated artists still finishing off their pieces and there were also still plenty of people around with their cameras (ourselves included) getting in their way and asking them the same questions as had been asked the day before.

The artist who probably suffered the most was CHU who was painting a 3D masterpiece that wasn’t all that obvious during Saturday’s session. He was also painting next to DANK’s mural, right in the centre of the Custard factory so he had plenty of footfall to contend with. As we were leaving on the Sunday evening he was still painting. 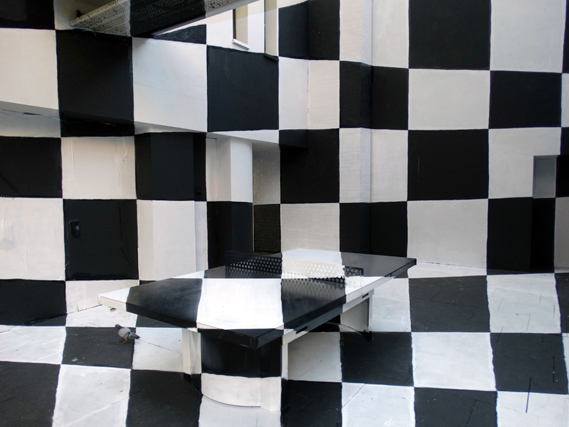 He had now incorporated a table tennis table into his 3D checkerboard piece that no photo or even video could do justice. He promised that it would be finished by that evening and I returned a few days later to view his finished work. Stand on a drain cover, just in front of it, and your brain is fooled into thinking you’re looking at a classic checkerboard pattern in 2D. Move slightly in any direction and the distortion kicks in instantly. Covering several oblique surfaces (including the table tennis table) the two-dimensional impression is viewable from only one vantage point – the drain cover. Mesmerising! 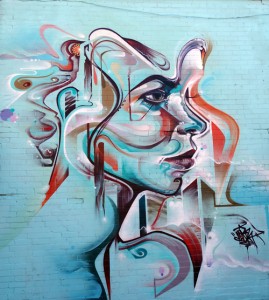 We left CHU to finish his painting in the now fading light and headed home, satisfied. As already mentioned, I returned a few days later to have a proper look around at all the finished work. It took me a good hour to walk around again and I think I also took a further three hundred photos too.

I just hope these murals are given the life expectancy they deserve because Digbeth’s walls have a reputation for being painted over quite quickly. It shows a healthy street art scene but quite often amazing pieces of art are only up for a week or two, before a new one is painted over them.

I’d like to think are enough walls in Digbeth to go round, and there’s plenty of time for everyone to enjoy what hopefully is a lasting legacy of Birmingham’s City of Colours festival 2014.