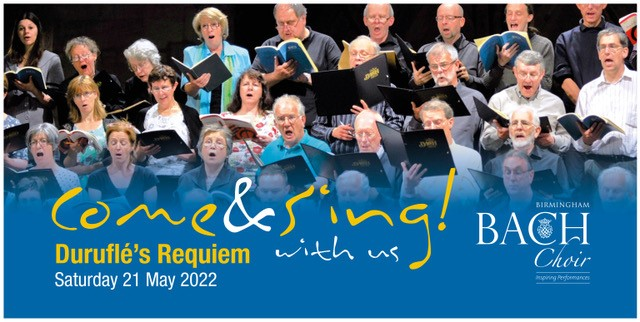 Birmingham Bach Choir’s annual workshop, Come And Sing!, returns on Saturday 21 May 2022 with an opportunity to rehearse and perform Duruflé’s Requiem.

Written in 1947 (and revised in 1961), French composer Maurice Duruflé’s contemplative Requiem (Op.9) is widely considered his masterpiece. Drawing on plainchant, it has its roots in a series of organ works – reflecting Duruflé’s position as a church organist.

The workshop, which takes place at Selly Oak Methodist Church, Birmingham, will be led by leading choral conductor and composer, Paul Spicer, and be followed by an informal performance.

Birmingham Bach Choir are one of the region’s most distinguished (and oldest) large chamber choirs. Celebrating their centenary in 2019, the choir perform a huge span of music spanning six centuries, often a cappella or accompanied by a single instrument or a baroque style orchestra.

For more information, and to book tickets, see: www.birmingham.bachchoir.com

As one of the UK’s leading large chamber choirs Birmingham Bach Choir has been contributing to the musical life of the West Midlands since 1919, making it one of the longest established musical groups in the area. Although the main focus is the Baroque period (especially JS Bach), the choir performs music spanning over 500 years including 20th and 21st century works.

2019 was the choir’s centenary, a year which saw the choir make a series of special appearances, including a Gala Concert in Lichfield Cathedral and a performance for royalty.