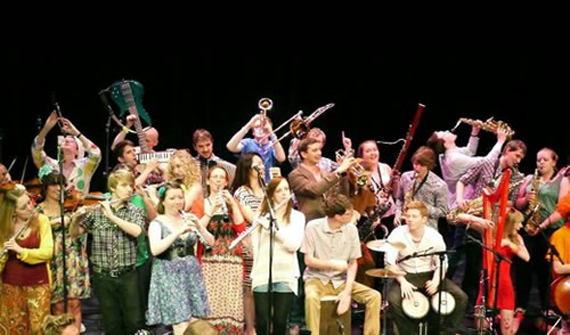 It’s mid week, that boring bit in-between last weekend’s hangover and the forthcoming weekend’s party… What better way to brighten up your mid-week life than to attend a lively, colourful 46-piece Conservatoire Folk Ensemble gig at The Spotted Dog in Digbeth!

Joe Broughton’s Conservatoire Folk Ensemble is something of a legend now. The current 45-piece band are on the road touring. Joe has been the director of this organic Ensemble since ’98 during which time the numbers in the band have grown to 100, no easy task to accommodate on a stage!

They tour every year around this time, an event that feels more like a party than a folk tour, for many it’s now an annual ritual announcing the start of our folk festival season.

The Ensemble also acts as a training ground for many budding folk artists and there have been some well-known members who have cut their teeth here.

An event unlike any other and must not be missed. Wednesday 10th June 2015 7pm The Spotted Dog garden.  46-piece Folk Ensemble from Birmingham Conservatoire. £5 entry – proceeds to the Ensemble tour fund. Limited space. Be early!