Consultation launched for the regeneration of Martineau Galleries 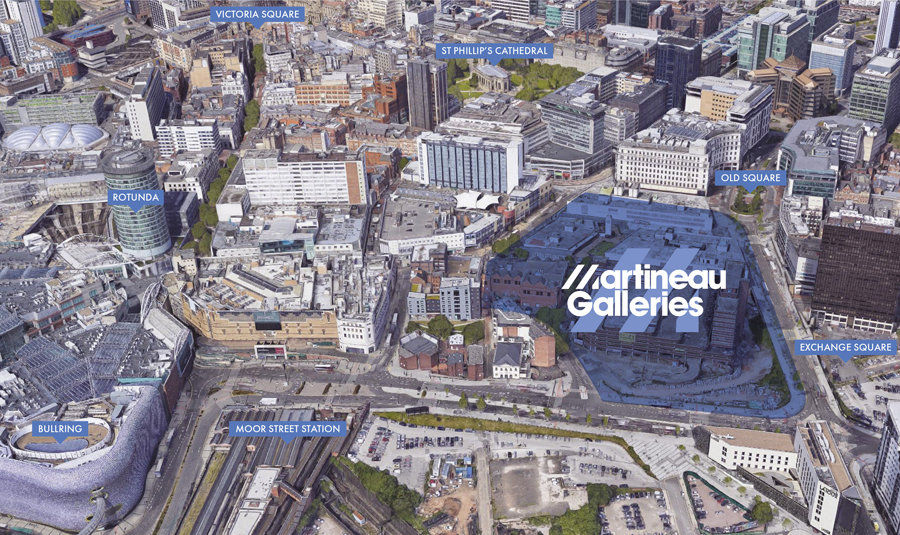 Hammerson, which owns and manages Bullring & Grand Central, has invited Birmingham residents to a public exhibition to present its plans for Martineau Galleries. The regeneration of this 7.5 acre site, including The Square Shopping Centre, the Dale End car park and 1-7 Dale End, will transform the area into a new, mixed-use neighbourhood, alongside creating new jobs for local people.

Martineau Galleries is the first major scheme to be brought forward as part of Hammerson’s City Quarters concept which was announced last year. City Quarters looks to create vibrant mixed-use neighbourhoods surrounding Hammerson’s existing flagship destinations, in thriving locations around the UK and Ireland. This will see Hammerson transform many of its city venues beyond pure retail into successful neighbourhoods providing homes, workspace and accessible public realm.

Development of the city-centre site, which is located next to the proposed HS2 Curzon Street Station, has the potential to completely transform the Dale End area.  The proposed mixed-use development would regenerate the existing site and include the creation of:

·        A signature gateway to Birmingham from the proposed Curzon Street terminal

·        High-quality public realm, including a new public square and boulevard

The public consultation will be run at the dedicated Martineau Galleries Consultation Hub, at The Square Shopping Centre, 100 Corporation Street, Birmingham, B4 6SX, and will be open to the public on:

Birmingham residents will be able to view the plans, meet and talk to the team, and give their feedback with the aim of shaping the vibrant new neighborhood within the city centre.

The plans for the regeneration and investment in the Martineau Galleries site have been designed to continue Birmingham’s ambition for growth and strengthen the city’s position as one of the leading centres for business, leisure and living in the UK.

Guy Wells, Assistant Director of Development at Hammerson, said: “We are delighted to be progressing our first major City Quarters scheme and look forward to sharing the plans with local residents and hearing their feedback. Hammerson has a strong track record of creating great destinations, not just in Birmingham but across Europe, and we want to continue our investment with a new city-centre neighbourhood where people can live, work, relax and enjoy. We hope as many people as possible get in touch and have their say on the future of Martineau Galleries.”