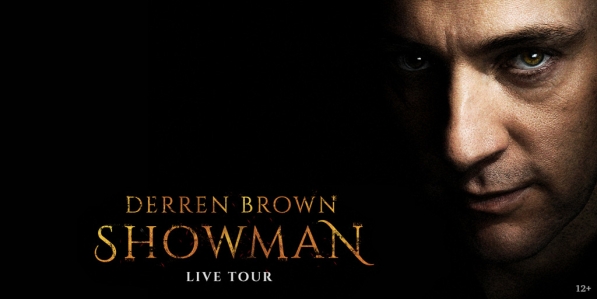 Derren Brown, the ever-popular multi-award winning master of mind control and illusion, will be taking SHOWMAN back on the road for his biggest in 20 years, arriving at The Alexandra Birmingham on 6 to 10 September 2022.

Derren commented: “2022 will be the biggest tour I’ve done in 20 years. It’s exciting and daunting and I’m considering a bigger suitcase. Maybe even a four-wheeler. It’s madness and I can’t wait.”

The content of Showman remains a closely-guarded secret but Derren has revealed: “The heart of the show is about remembering what’s important. Like how the very things that we find most isolating in life – our fears and difficulties – actually connect us. Framed with what I think will be some extraordinary demonstrations of my voodoo”.

When SHOWMAN toured in 2021, it garnered rave reviews across the board and Derren reflects: “Yes, I think it’s had the best response of any show I’ve done. It’s lovely to know, and a happy thing to read people’s responses right after a show on Twitter, but ultimately, in order to do it night after night, I can only really be concerned about the relationship between me and the particular audience in front of me”.

Derren’s live shows have won him two prestigious Olivier Awards – for Something Wicked This Way Comes (2006) and Svengali (2012) and he has received more Olivier nominations and wins than any other one-man show in theatre history. He has played to sold-out houses across the country every year since 2003 to over 1.6M people. Previous shows, Infamous, (2013, 2014), Miracle (2015, 2016) and Underground (2017, 2018) have also enjoyed critically acclaimed seasons in London’s West End. In 2017 he made an award-winning US stage debut at the Atlantic Theater in New York with Derren Brown: Secret, which transferred to Broadway, enjoying a sell-out season at the Cort Theatre, New York until Jan 2020.

Born in Croydon, UK, in 1971, Derren traces his interest in magic and psychological techniques to childhood, but it was only later, at Bristol University, where he reluctantly studied Law and German, that he started to delve more seriously into the stranger edges of human experience and what they might mean to us.

After graduating, Derren forewent an international legal career and concentrated on developing his performance skills. He was able to pay the bills by working as a magician and hypnotist with a sideline in portraiture.

His big break came in 1999 when he was asked by the UK’s Channel 4 to put a TV show together. The result, DERREN BROWN: MIND CONTROL, was shown in 2000, proving an immediate success and winning a coveted Rose d’Or. Since then, re-defining magic through must-see TV and stage events, Derren has exhilarated audiences world-wide with a never-equalled brand of mind-control, suggestion, showmanship and illusion.

His name has become synonymous with the art of psychological manipulation in the UK, and he has gained a reputation as a performer prepared to constantly challenge and break down boundaries.

Amongst a varied and notorious TV career, Derren has played Russian Roulette live, convinced middle-managers to commit armed robbery, led the nation in a séance, stuck viewers at home to their sofas, successfully predicted the National Lottery, motivated a shy man to land a packed passenger plane at 30,000 feet, hypnotised another to assassinate Stephen Fry and created a zombie apocalypse for an unwitting participant after dramatically ending the world.

In THE PUSH (streaming on Netflix), he exposed the psychological secrets of obedience and social compliance with terrifying results, again creating must-watch television and passionate media debate worldwide. His show MIRACLE (which blows the roof off the dark world of evangelical faith-healing) is also a popular choice on Netflix. Derren’s most recent TV special, SACRIFICE, also steaming on Netflix, astonished audiences around the world as he attempted to persuade someone to make the ultimate sacrifice: lay down his life for a complete stranger.

In 2020, the great man celebrated twenty years on Channel 4 with DERREN BROWN, 20 YEARS OF MIND CONTROL: LIVE, a dedicated night honouring some of his most jaw-dropping moments on TV.

He has toured every year since 2003 with a series of live shows, which have won him two prestigious Olivier Awards – for SOMETHING WICKED THIS WAY COMES (2006) and SVENGALI (2012). In 2018 he received his fifth nomination, for UNDERGROUND. This means Derren has had the largest number of nominations and wins for one-person shows in the history of the Olivier Awards.

In 2017 Derren recently made an enthusiastically embraced stage debut at the Atlantic Theater in New York with his show SECRET, winning the 2018 NY Drama Desk award for Unique Theatrical Entertainment. The show transferred to Broadway, in Nov 2019, enjoying a sell-out season at The Cort Theatre until early Jan 2020.

As an author, Derren has received much praise for his best-selling books, TRICKS OF THE MIND, CONFESSIONS OF A CONJUROR and HAPPY, which have, collectively, sold over a million copies worldwide. Transworld recently published A LITTLE HAPPIER, condensing the lessons of Derren Brown’s Sunday Times bestseller HAPPY into a series of thoughtful and inspiring mini-chapters. His new book: A BOOK OF SECRETS: FINDING SOLACE IN A STUBBORN WORLD, is now available.

Privately, Derren paints and photographs. His book PORTRAITS offers a collection of his early paintings, which have been exhibited at the Rebecca Hossack Gallery, London. A book of his street photography, MEET THE PEOPLE WITH LOVE, has been released, again by Transworld. Examples of his accomplished work can be viewed on his website and Instagram page.

He recently recorded a series of successful podcasts for Audible called BOOT CAMP FOR THE BRAIN and is currently developing a new stage version of THE INVISIBLE MAN, which plans to premiere in the autumn of 2022.

After a successful run of DERREN BROWN: SHOWMAN in 2021, his latest theatre tour, will be back on tour, kicking off in March 2022.