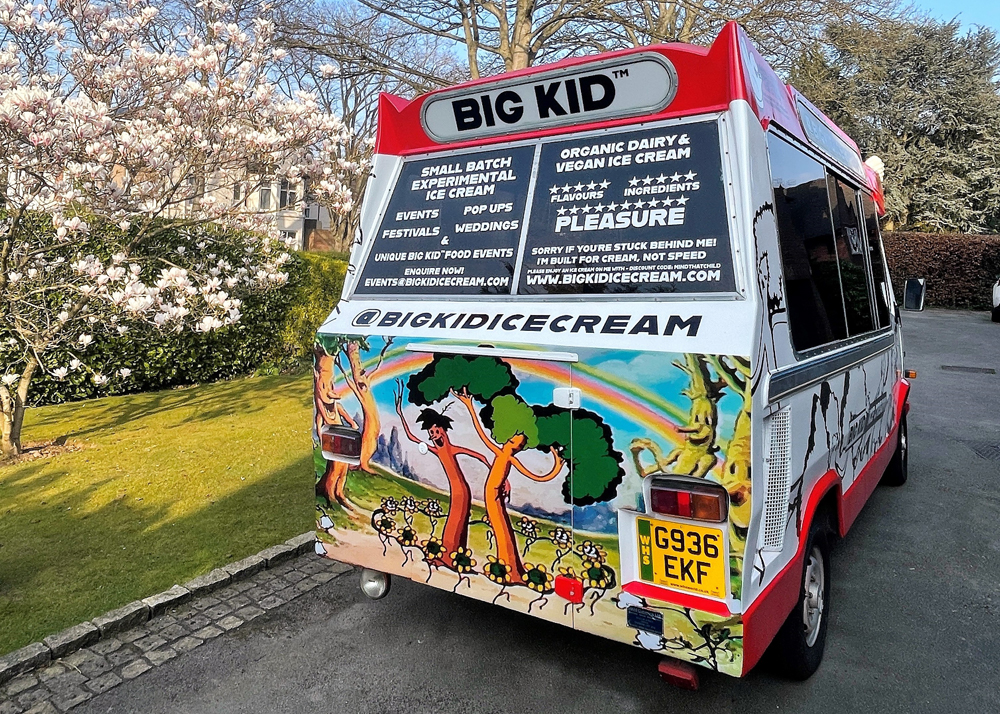 Birmingham’s Dig Brew Co brewery is catering for the “big kid” in everyone this Easter with a quirky fun-filled ice cream launch party.

Taking advantage of the warm spring weather, customers will be able to enjoy experimental ice creams with flavours ranging from McDonalds Fries to Wasabi Peanut Butter and Champagne Maraschino Cherry to Peach Melba at the brewery on River Street in Digbeth on April 16.

The artisanal ice cream – traditional ‘Mr Whippy’-style and hard slushes – will be served from a uniquely branded Big Kid™ van parked up outside the premises.

With a government backed Start Up Loan, Harry invested in an ice cream van and hired a commercial kitchen to start his business. He will be in his vehicle serving customers during the brewery’s opening hours between midday and 11pm on Easter Saturday.

Oliver Webb said: “The Big Kid™ Ice Cream launch party is the latest in a series of fun events to celebrate our fifth anniversary. Big Kid™ is inspired by the likes of Ben & Jerry’s and mirrors Dig Brew with its quirky motifs and ambitions in relation to our big multinational competitors.

“Even though Harry is only 27, he is adopting a nostalgic theme to his range, based on reliving what we used to enjoy as youngsters but without any of the disappointments that can bring.”

The ice cream range includes flavours for all dietary needs, with prices ranging from £4.95 for a single scoop waffle cone to £9.95 for three scoops.

Dig Brew Co’s Dough pizzeria will also serve Detroit and traditional round-style pizzas, and a full range of fresh beers will be served in the tap room. A local DJ will also provide music throughout the day.

Harry Webb and his Big Kid™ Ice Cream van will be showcasing at venues across the Midlands this summer, with plans to serve at festivals later in the year. They are available for weddings and other events. The website is at www.bigkidicecream.com.

Dig Brew Co was established in 2017 and brews and distributes a constantly changing range of seasonal lagers, stouts, sours, and pale ales. Dig Brew beers are currently listed in hundreds of pubs, bars, and off licenses across the UK and internationally. Its taproom is normally open on Fridays from 5pm-11pm and on Saturdays from 12noon-11pm. The website is at www.digbrewco.com.