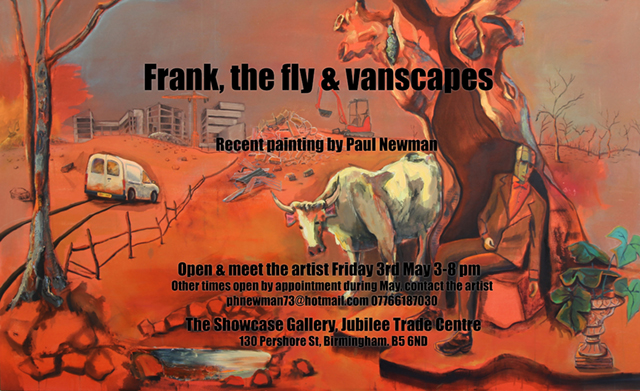 Friday 3 May 4pm until late

This May, get out and about, discover something new and enjoy the fantastic independent culture Digbeth has to offer!

In his first solo exhibition, Greg McLeod the BAFTA-award winning animator and illustrator will create 1000 illustrations of Birmingham, the city in which he grew up. But all is not quite what it seems… each image has a corresponding title, but you may want to think twice before taking the labels as gospel. Along with his illustrations, a new film will play on a loop in the gallery – an animated documentary charting the [un]true history of the city. The exhibition will run throughout Flatpack Festival, but this event will be a special opening with DJs Matt and McGill providing the soundtrack.

Wayne: Hello and welcome to Messages From The M11, my name is Chloe Langlois, and this series explores the mysterious events that took place in a layby just outside Norfolk during the summer of 2016. All persons involved will be played by untrained actors in a dramatic reconstruction of real life events. We stayed the first night with Sefa’s kind and accommodating friends; Ben was an orthodox christian, and his daughter Matilda would stand in a power stance pissing assertively into the ground whilst looking you directly in the eye.

This week at Dig Brew we are open as normal, but next week we are hosting a three part opera called Besse. In collaboration with Infinite Opera to be performed in the brewery on Friday 10th. Part I and II was a hit so we are expecting the final part to be a sell out, don’t worry if you’ve missed the first two there will be a short trailer on what’s happened. There will be an after party to celebrate with music being supplied by local DJ Roman Candles. You can buy tickets either online or in our taproom.

Duplicate publishing fair is a celebration of printed matter which aims to explore what duplication means in a digital age. Bringing together independent publishers from across the UK, the fair will feature over 50 exhibitors selling zines, comics and artists’ books. A programme of free artist-led workshops and talks will explore themes surrounding self-publishing. Duplicate runs alongside Flatpack Film Festival, if you’re in town for the fair, be sure to check out their incredible programme too!

CLIPS is the first group show of Birmingham Collage Collective. It consists of 14 artists, all Birmingham based and all exploring the medium of collage

Grand Union: On the Subject of Precarity, 6–8pm

The term precarity – a state of perpetual instability – seems to be especially pertinent within the current moment. On the Subject of Precarity is a group exhibition with artists Betsy Bradley, Gareth Proskourine-Barnett and Rafal Zajko who collectively engage with shifting architectures through a focus on materiality, the significance of the fragment, and a fluctuating relationship to place. Curated by MA Art History and Curating students at the University of Birmingham in association with Grand Union, join us for the opening, where visitors are invited to watch the deconstruction of Rafal Zajko’s ice sculpture – a performance piece which explores ideas surrounding instability.

Vicky Roden presents a new body of work drawn from Digbeth, its people, its places and its legends. Examining themes of appropriation, gentrification and the eternal cycle of arts-as-social-regeneration Fleshing, Filching & Fetishes focuses on humanities universal need for symbols and ritual, relics and celebration. Fashioned from a number of mythological artefacts, sinister cryptids and other revered objects this collection of genuine phonies celebrates the cultural and financial investment arts organisations have contributed to the locality and the very real community which has developed in the Digbeth area. Including fakery, taxidermy, embroidery and found objects.

A penguin unplugs, slow smoke pours …Melt is an invocation through sound and light to tempt out the more esoteric and overlooked elements of the TURC archive. Using tropes from popular culture such as the music video, transitions and infomercials Adam Lewis Jacob and Susannah Stark in collaboration, will perform music and improvise with live visuals as a way to communicate with the TURC archive.

Adam Lewis Jacob is working with Vivid Projects as part of a national artist film project, WORK. It involves four artists exploring the realities of what ‘work’ means for the ways we live today.