Discovering Birmingham’s Heritage over a Pint!

There are several historic pubs still standing in Brum, but many have lost any local identity with original features long since replaced. However, some gems do still exist, with many beautiful original features still in situ. Some pubs, and bars, go one step further, and they attempt to include local history, respecting the heritage of Birmingham.

This article takes a brief look at some of the best places to enjoy a drink whilst soaking up the city’s heritage.

Thes Bull’s Head by Davenports, is a listed traditional pub. This beautiful old boozer was refurbished, late 2016, to bring out the original features of this Victorian gem, whilst simultaneously creating a cool modern vibe.

Davenports Brewery, established in Birmingham in 1829, have restored the pub to its former glory whilst spicing things up, including returning the pub to its original name, The Bulls Head. The pub, which has been known as the City Tavern since 1984, is only yards from the site of one of Davenports famous original brewery on Bath Row.

Constructed in 1901 and designed by James and Lister Lea, the ‘backstreet boozer’, has undergone a sympathetic refurbishment and has repositioned its offering. Being a Davenports pub, The Bulls Head offers traditional, award-winning cask beers made here in Birmingham, many of which have not been seen for many years, giving Brummie drinkers, and visitors the chance to taste some local history. Expect to find cask ales, craft beers, old favourites, cocktails, live music, delicious and creative pub food and a whole host of Birmingham heritage on the walls, if that wasn’t enough then get this, the pub was recently used as the Garrison pub in BBC Drama Peaky Blinders for their launch night. 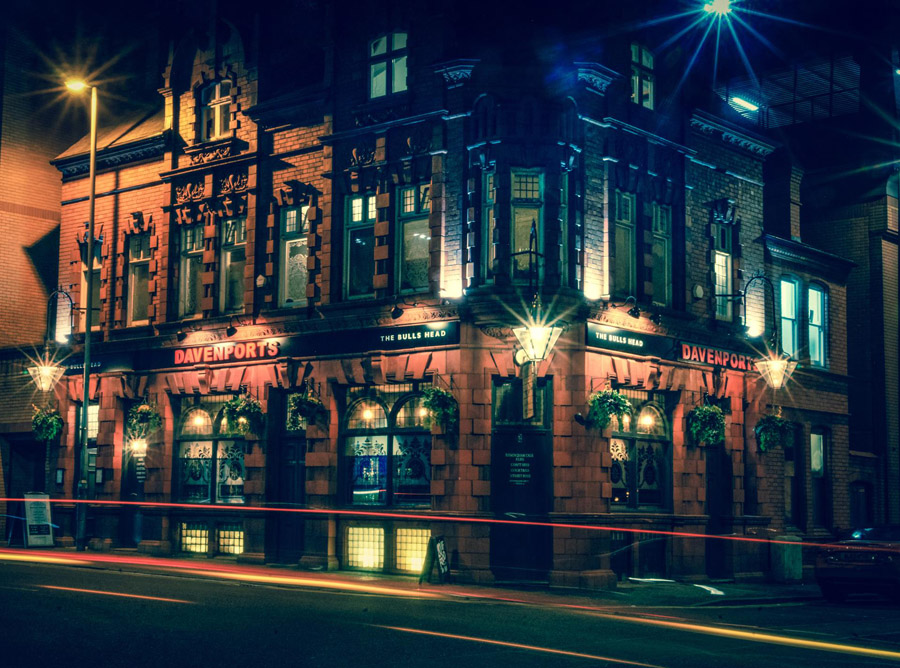 1000 Trades is an independent Neighbourhood Bar and Kitchen situated in the Jewellery Quarter, Birmingham. The business is located in a Grade II-listed building at 16 Frederick Street, and celebrates Birmingham’s rich craft heritage.

Historic England’s archives show that 16 Frederick Street was built in the 1870s and was previously used as a jewellery works. The building was awarded Grade II status in 2004. Today you can sup a pint of real ale and take in some of the fab modern art pictures of Brum dotted around the walls, not to mention the printed timeline of how the city held its title of ‘City of a Thousand Trades’. 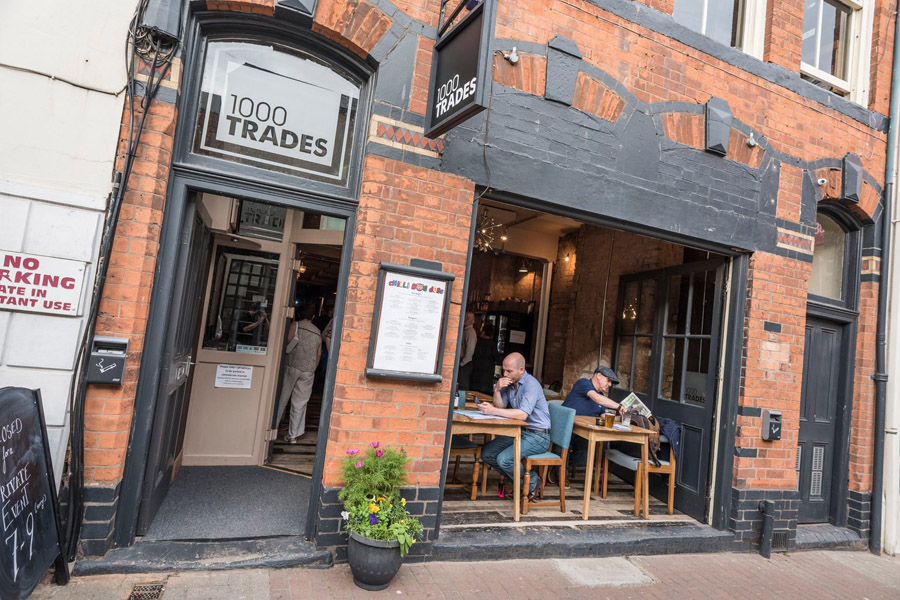 The Old Crown is one of Birmingham’s oldest buildings. Originally built in the 14th century almost all of the present building dates from the early 16th century, the earliest evidence of the building being operated as an Inn dates to the early part of the 17th century.

The building survived the English Civil war, during which time a skirmish was fought around the streets of Digbeth. From 1666, the Inn was known as “the sign of the Crowne” and the building was residential from 1684 until the 19th century, surviving proposed demolition on several occasions during the mid to late 1800s.

In more recent years The Old Crown has managed to live through tough times. Where many Digbeth pubs have closed their doors due to a decline in local manufacturing/customers, The Old Crown has reinvented itself whilst maintaining that true ‘old boozer’ feel. There are various ancient documents and memorabilia inside the pub. 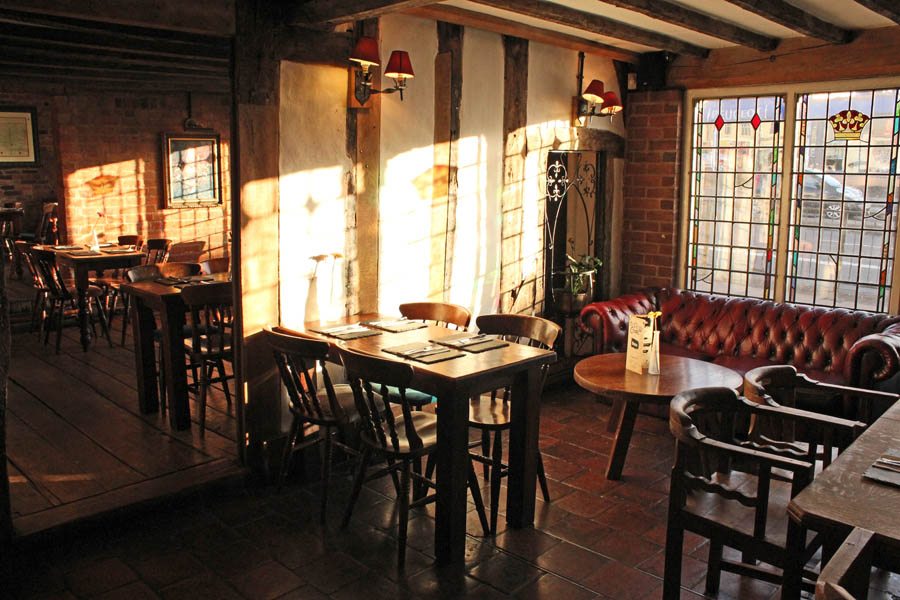 Another Digbeth boozer is The Spotted Dog. There has been a pub on this site for well over a hundred years. The present building replaced a much earlier structure and it is thought that the cellar is all that is left of the old pub. If you ask John the Landlord nicely, he might bring out the original deeds, which date back to the 1700s, and highlight old farmsteads and a Digbeth which would not be recognisable today.

The many fascinating trinkets and artefacts which adorn much of the pub interior are reminiscent of old traditional Irish pubs, they all make sense of the pub and its owners, and it all contributes to a cosy backwater pub atmosphere. This has been in the same family for many years and celebrates perfectly Brum’s Irish heritage. 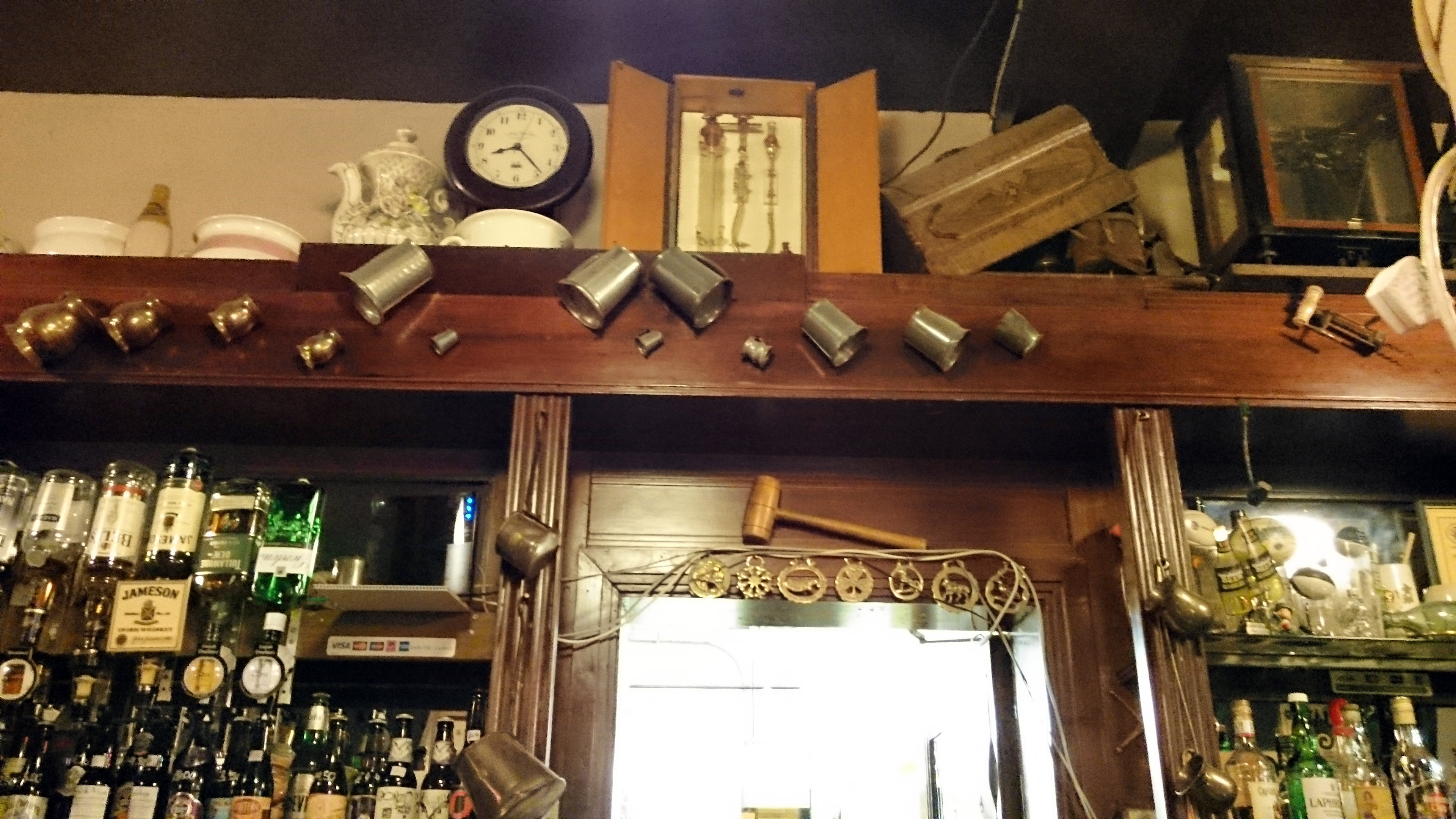 This Bull is an award-winning, traditional pub located in the heart of what was once Birmingham’s historic Gun Quarter (the busiest in the world at the time). There has been a hostelry selling ales on this site since the 18th century (1729). Steeped in local history, The Bull is “a jewel in the crown of Birmingham’s pubs”.

Inside you will be greeted with beautifully ornate late 19th century saloon style windows and a traditional Victorian decor. There is a small Welsh chapel opposite and it has been known for the male Welsh choir to rehearse in the side bar to the entertainment of the drinkers.

There’s a resident pub cat, a side snug with sofa and all kinds of trinkets such as jugs hanging above the bar. Most of the loyal locals travel in far and wide to drink in the Bull and once you step inside you will see why. 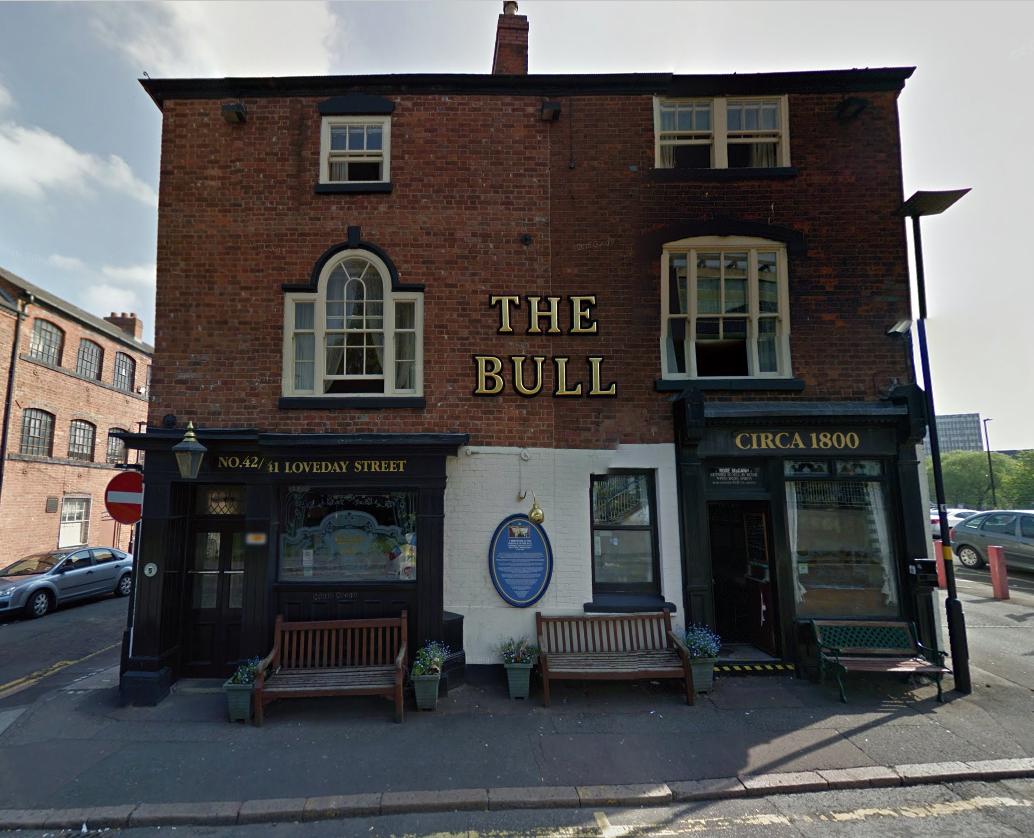 For more than 100 years The Barton Arms has stood on this site. The stunning design of the current Bartons Arms remains one of the finest examples of Victorian pub architecture and one of the most beautiful pub interiors in the country.

The existing building was built in 1901. Designed by a Mr. Brassington of James and Lister Lea, the area’s primary pub building firm at the time, to be the flagship of the Mitchell and Butlers brewery estate. While the exterior, sporting a foursquare clock tower is in an imposing brick and stone neo-Jacobean style, said to be inspired by the nearby Aston Hall, the interior is the epitome of Victorian decorative grandeur. You will find a riot of original features, rich mahogany woodworking’s, stained and engraved windows and mirrors, snob-screens, sweeping wrought-iron staircase and what the pub is best known for, its wall to wall Minton-Hollins tiles, from shiny-glazed decorative patterns to huge painted scenes.

As you stand at the bottom of the fabulous flight of stairs and gaze up toward the stunning stain glass window, just for a brief moment you are whisked away to a time gone by. It is easy to imagine, that at any moment, these two larger than life characters will appear and descend this gorgeous Victorian staircase. 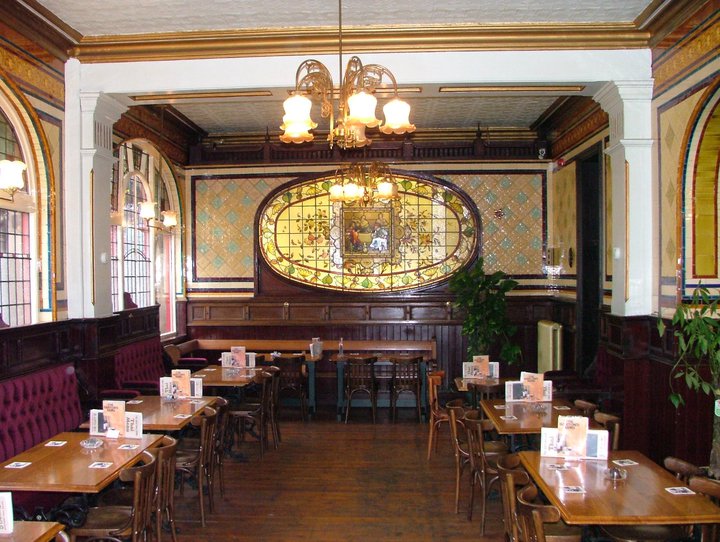 The James Brindley canalside pub was been brought back to life in a beautiful refit which celebrates the life of canal engineer James Brindley from Derbyshire. Brindley had a huge impact on the success of Birmingham with his canal network, thus transforming a small town into a city of a thousand trades.

Inside, apart from fab beers, wines and cocktails, you can mooch around the many trinkets and objects of historical significance to this famous canal engineer – if Brindley’s ghost were to ever return to Brum, there is no doubt this would be the spot he’d be seen. 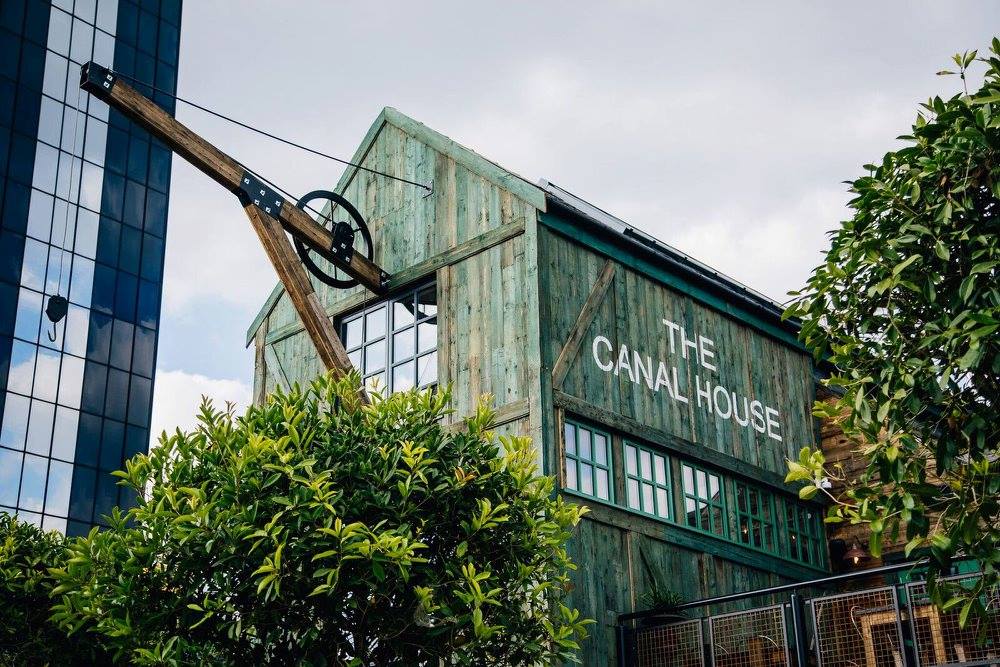 Within the Hyatt Regency is the The Gentleman & Scholar Pub. Guests can enjoy a great selection of fine wines, champagnes and cocktails with friends in the Pub and Terrace. You do not have to be staying in the hotel to enjoy the pub and restaurant!

Styled on a traditional tavern with a contemporary twist, The Gentleman & Scholar opens onto Broad Street with a heated terrace. The perfect place for pre-theatre drinks, a nightcap before retiring to bed or an evening spent socialising.

There is welcome a nod to the city’s industrial heritage in the general design, and on the walls with various heritage relating to the Lunar Society. 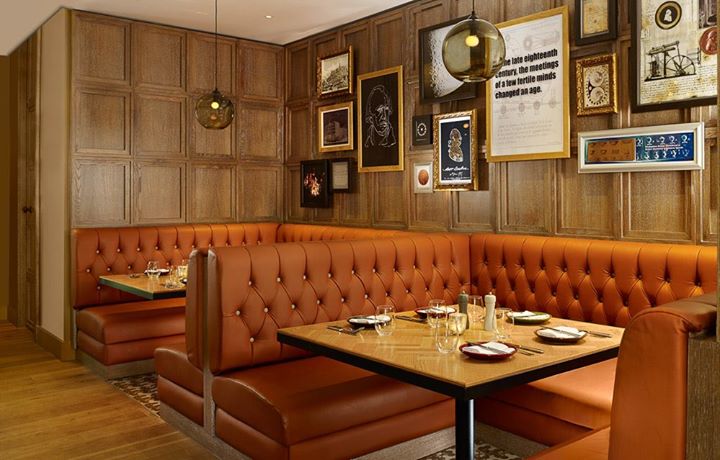 The Physician is a recent addition to Birmingham. The building was once known as the BMI building and used to house the vast ‘Sampson Gamgee Library for the History of Medicine’. It was commissioned in 1863 when the Calthorpe Estate expanded to accommodate a huge population growth from the turn of the 19th century. The building oozes historical grandeur; it’s high ceilings and large sash windows create beautiful rooms of all shapes and sizes which lend themselves perfectly to becoming a beautiful pub.

There is a huge reclaimed wooden bar at the heart of the building, housing 8 local cask ales, with plenty of room for a 50 strong wine list and array of spirits. The bar overlooks a large wooden floored room, perfect to house the hustle and bustle of drinkers in front of the open fire. It’s off this area that you will find smaller rooms to squirrel away in if you choose to have more intimacy. The walls are covered in local history from paintings to drawings and set the scene of olde world Brummagem. 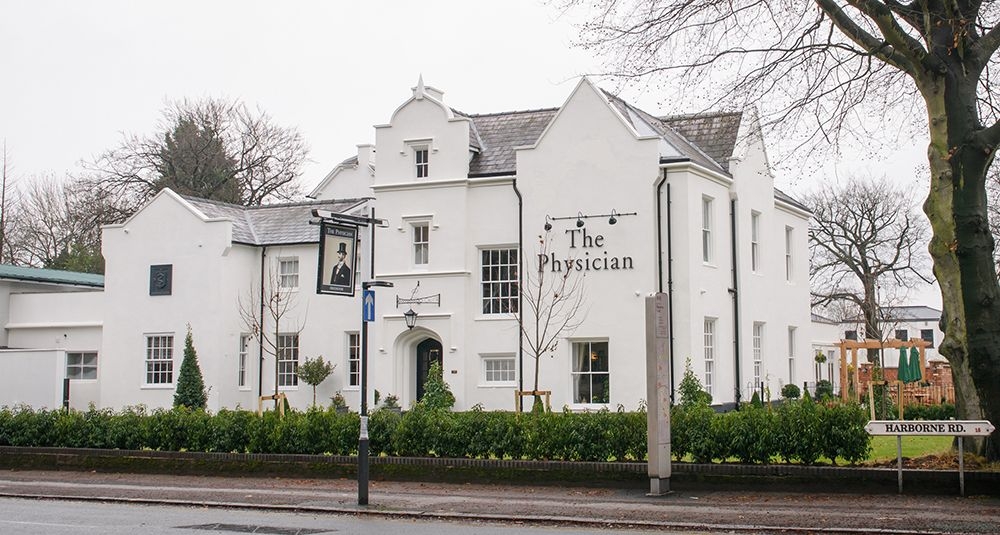