For our latest exclusive Q&A, Sam Redmore of Freestyle, has caught up with legendary DJ Andy Smith (who many will recognise from his work with Portishead), ahead of his forthcoming appearance at the Hare & Hounds in Kings Heath where he will be recreating his ultra seminal album ‘The Document’.

The first multi-genre DJ mix to be released on a major label, Andy Smith’s ‘The Document’ hit the streets in 1998 and went on to establish itself as one of the albums of the year.

Featuring tracks by artists as diverse as The Jungle Brothers, The Meters, Peggy Lee, Spencer Davis Group and Love Unlimited Orchestra, the mix made a huge impact, with a further three volumes to follow and vinyl copies of the albums still in huge demand today.

On Friday the 15th April at Hare & Hounds, Kings Heath, Andy will perform a very special DJ set in which he recreates The Document in its entirety on vinyl, followed afterwards by an ‘across the board’ multi-genre set which will no doubt take in funk, soul, hip hop, jazz, Northern soul, reggae, ska and much more. Advance £8 tickets including a very limited ‘4 for £20’ group ticket offer are on sale, find both here.

The Document was released in 1998 to huge acclaim. Did you ever imagine at the time that 18 years later there’d be demand for you to come out and perform it in its entirety?

Not really. It was just my way of doing my own thing rather than being ‘that DJ something to do with Portishead’. I knew I had to do something that would stand the test of time and be what i was about, but i couldn’t even imagine that i would still be DJing 18 years down the line!

Were there any tracks that you wanted to include on the album but couldn’t license?

What one track would you have chosen to include had licensing not been a factor?

Probably The Beatles or Hendrix!! There was also a ruling on compilation albums only being able to have a certain amount of tracks so I couldn’t use any more (this was a ‘London/FFRR’ US ruling).

Can you tell me a little about some of the other compilations that you’ve been involved in releasing?

Well there were the follow up ‘Documents 2 & 3’, a Trojan Document and a Greensleeves Document. Also a Northern Soul compilation, the Jam Up Twist plus other funk compilations (oh and a lover’s rock reggae one that’s only on iTunes).

The last time you played at the Hare & Hounds was for your Jam Up Twist club night. Will any of those styles be making their way into your DJ set on Friday?

I usually do carry some 50s and 60s 45s with me for an across the board set. It depends on the venue but they can ignite a night like nothing else!

Can you tell me about your production work (such as with Boca 45). Are you still producing or is this an area you’ve moved away from?

I’ve moved away from producing since the Dynamo Productions material I did with Scott (Boca 45), and have only really been involved in locating samples and loops for artists like the Prodigy and Lack Of Afro.

If your whole record collection were burned in a fire and you could only save one record from the flames, what would it be?

Other than The Document (to show my kids when they are older), probably my personally signed ‘All Mod Cons’ LP by The Jam.

A lot of people know of you through your work with Portishead. Can you tell me a bit about your involvement with the band?

I met Geoff Barrow in the late 80s when i was DJing at the youth club in Portishead (the place) and he was working on beats but had few records to sample. I kind of opened up my collection to him and played him some tracks he might not have known.

I then represented Portishead as a club DJ (because nobody else wanted to!) and went on two Portishead tours (95 & 98) doing the opening set (playing soundtracks and original samples), plus a scratch mix set prior to the band’s appearance. I also did some cuts with the band during some tracks that required 2 DJs at the same time.

Can you tell me more about the Prodigy sample?

I supplied Liam (The Prodigy) with the Manfred Mann’sample that was used in the track ‘Stand Up’. It went on to be heavily featured in the film ‘Kick Ass’. I still supply Liam with ideas from time to time.

When did you start DJing, and what inspired you to first get behind the decks?

Probably the Tony Prince disco import show on Radio Luxembourg in the late 70s/early 80s. A DJ called Alan Coulthard used to do megamixes and i was intrigued. Also a DJ called Froggy on the jazz funk scene, and James Hamilton’s incredible attention to bpm (beats per minute) listings in Record Mirror magazine at that time.

Which other DJs do you admire?

I admire DJs for different things. For skill and precision, Jazzy Jeff, Cash Money and Q-Bert, but Northern Soul and reggae DJs that don’t just play all the obvious tracks all the time!

Any favourite venues to play at?

Well it was Madame Jo Jos in Soho, London but that’s shut no. I did get to DJ there every Saturday for 9 years though!

New Year’s Eve in Montreal, Canada. I reached behind the deck to make an adjustment and the wire in question was ‘live’ and shorted out all the power. I hadn’t even started playing!

Can you tell me about what you’ve been working on most recently, and what’s next?

Just more DJing. I’m starting a radio show on Soho Radio next week. Uploading more videos of me spinning the wax. Trying to stay relevant to a younger generation! 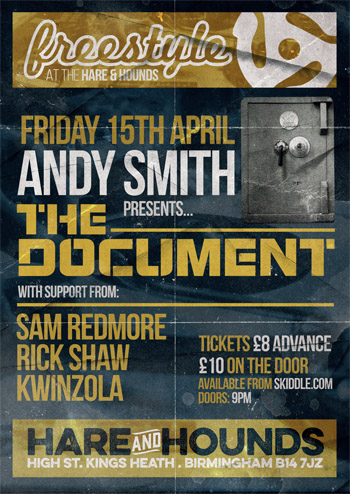 Lineup and Details for Andy Smith presents ‘The Document’.

Freestyle at Hare and Hounds Presents: