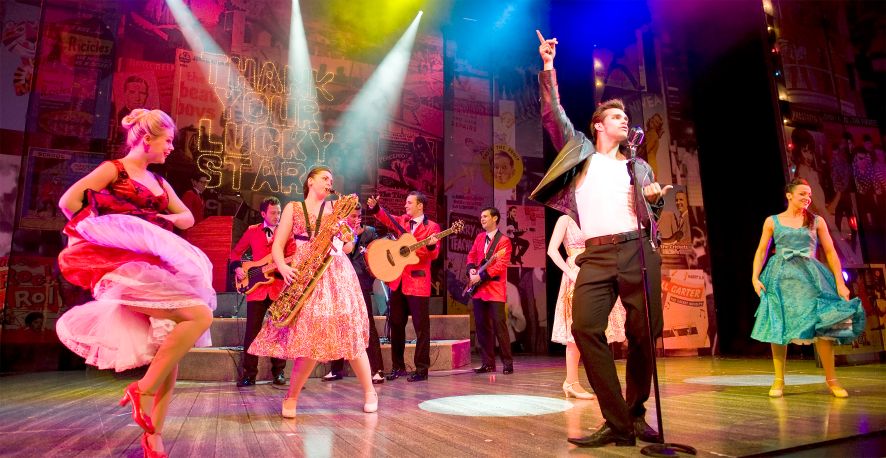 Bobby & Laura, Norman, Sue & the gang get back together for the follow-on musical inspired by the million selling albums.

Hit recording star of Venus in Blue Jeans, Go Away Little Girl, It’s Almost Tomorrow and many more, Mark Wynter will be joining a company of established Dreamboats and Petticoats favourites from the past fifteen years.

Elizabeth Carter and David Ribi, Dreamboats and Petticoats’ most successful ever co-stars, lead the cast in the third musical inspired by the latest release in the series of smash-hit, multimillion selling Dreamboats & Petticoats albums, Bringing On Back The Good Times is filled with wit, charm and songs from the golden era of Rock ‘n Roll. The production will be at The Alexandra Theatre, Birmingham from 21 March to 26 March.

Bringing on Back the Good Times finds Laura (Elizabeth Carter) with a successful solo career but her partner on their number one hit record Dreamboats and Petticoats’ Bobby (David Ribi) has left the spotlight and decided to re-join his former group Norman and The Conquests at St Mungo’s Youth Club.

The adventures that Bobby and Laura and of course Norma and Sue, and Donna and Luke (the group’s manager) go through together, include a season at Butlins, and an appearance at The Eurovision Song Contest – but most of all leads them straight back into each other’s arms and bringing on back the good times indeed.

With book by Laurance Marks and Maurice Gran and musical supervision by Keith Strachen, Bringing on Back the Good Times is packed with some of the greatest songs ever written, from Roy Orbison, Eddie Cochran, Elvis Presley, The Walker Brothers and many, many more, and will once again have audiences all over the country jiving in the aisles and singing along with their memories.