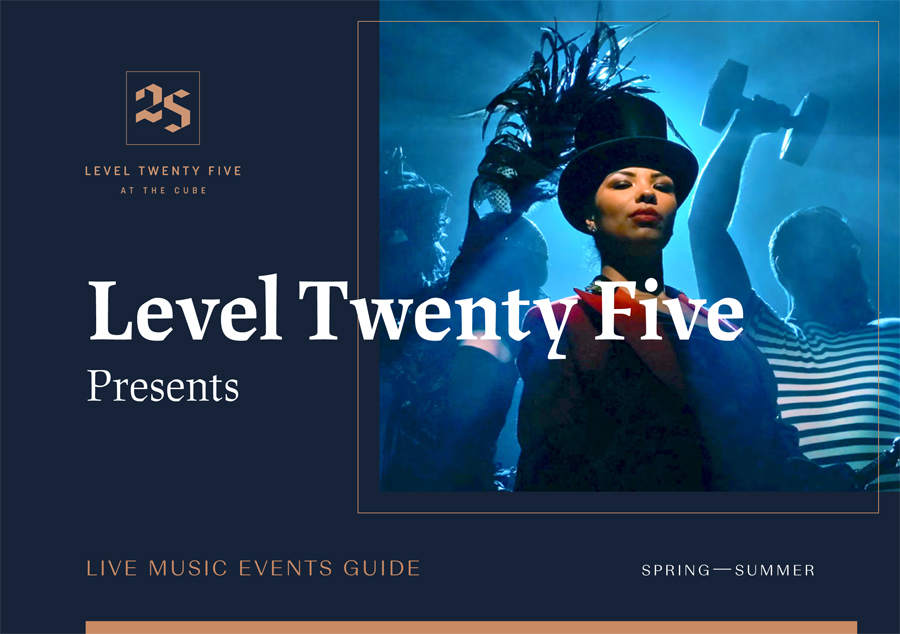 Level25 is set to provide Birmingham’s soundtrack to summer with an all-new live music events programme that brings together some of the finest musicians and entertainers from across the region. Combining live performances and sensational city skyline views, Level25 has announced a diverse schedule of exciting events including Brum favourites Keep off the Brass, Fridays dedicated to your favourite decade, and events inspired by the best musicals around.

Part of Marco Pierre White Steakhouse Bar and Grill at The Cube, Level25 serves up the best nightlife in Brum, and is gearing up for a serious summer of sound. Kicking off with Keep Off The Brass, who will take up residence from now until the end of August, Saturday nights will see you enjoying a three-piece brass band accompanied by a live DJ.

This exciting fusion of high energy beats will no doubt get you into the party spirit, providing the perfect backdrop to enjoy a cocktail or two. Appearing on 4 May, 1 June, 29 June, 3 August and 31 August, add some funk, soul and RnB to your Saturday night.

Birmingham’s most desirable penthouse will also introduce bespoke live music events that feature on the first Friday of every month, helping you kick back and ease into the weekend. Featuring acclaimed artists from across the country, the line-up includes;

In addition to the free live entertainment schedule on Fridays and Saturdays, there are also a number of special ticketed events taking place.

Sunday 26 May sees Higher House takes over Level25 for Skyline Symphonica. An experience like no other, this special event will bring a taste of the Balearics to Brum, with an exclusive never-before-seen show featuring a 25-piece orchestra playing everyone’s favourite Ibiza Classics. Bringing Café Mambo vibes to Level25, you’ll not only feast on the unparalleled view of the city but also enjoy a three-course dinner created by Marco Pierre White’s executive chef.

On Sunday 9 June, a West End show cast will bring you ‘An Evening at the Musicals’, performing an eclectic mix of musical theatre classics from Les Misérables, Phantom of the Opera, Chicago, and contemporary shows such as Hamilton, School of Rock, and Mamma Mia. Take your seat at the top of The Cube for a whistle-stop tour of best-loved musical theatre and a bespoke three course menu.

Then comes the ultimate finale when ‘The Greatest Show’ takes place on Friday 16 August. Inspired by the multi-million box office smash hit, The Greatest Showman, this is an unforgettable, totally immersive dining experience filled with elaborate costumes, illusionists and acrobatics. Pull up a ringside seat with a sparkling arrival cocktail and expect the unexpected as Level25 presents a three course themed dinner interspersed with the best of live entertainment. ‘Come Alive’ and sing along with your favourite tunes from the film at this incredible live event.

Level25 was launched to do things differently – to push the boundaries and bring the best entertainment to Birmingham. We’ve got the most talented local, regional and national performers joining us over the summer, thanks to our wonderful live music partners, Elegant Entertainment. Together, we’ve created a concept that celebrates what nightlife used to be about; the days of the house band, themed night, and show-stopping talent. Think of a modern day Ronnie Scott’s but dedicated to all genres and ages… and that’s what summer on Level25 looks like!

Marco Pierre White Steakhouse Bar & Grill launched Level25 last year as they made a commitment to provide Birmingham with events that take your night to the next level. To find out more, see the full schedule of events and buy tickets, visit the Level25 Presents website.