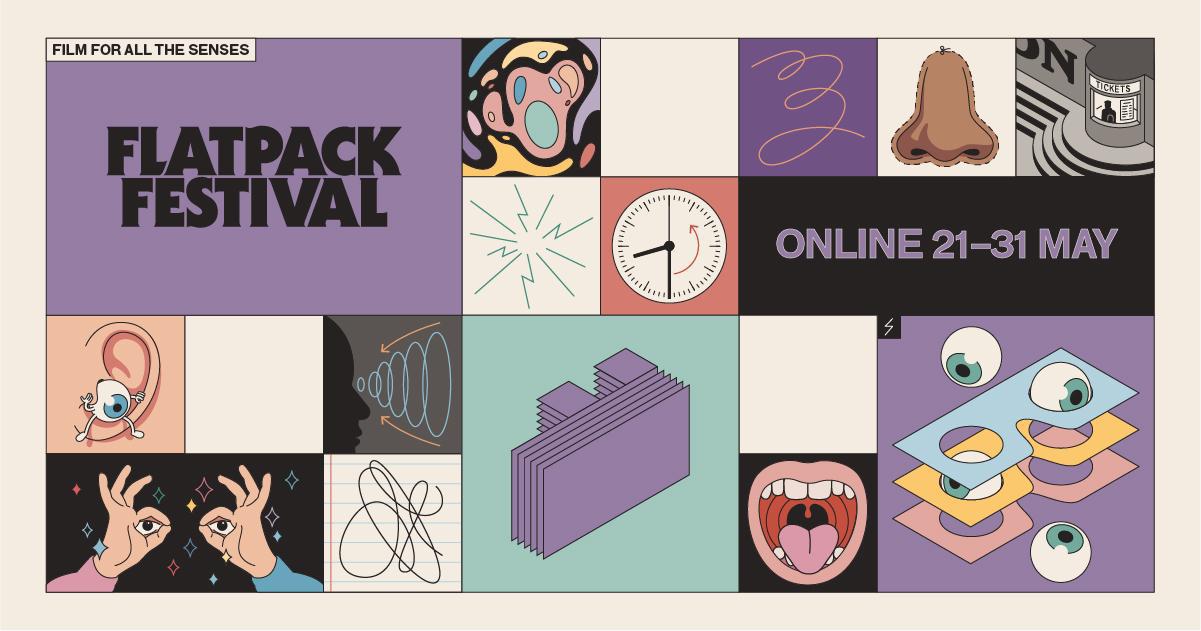 “The festival that defines the word eclectic” – Sight and Sound

Flatpack kicks off a four-month season of events on 21 May with a full-to-bursting programme of the very best filmmaking from around the globe.

In 2020, Flatpack adapted their physical festival programme at speed in order to give us Flatpack Festival: the Home Entertainment Edition. Continuing to roll with the punches, 2021 will see the delivery of a 4-month season of events, online, outdoors, and, all being well, in Birmingham cinemas and auditoriums. The season kicks off on the 21 May, when Flatpack will return to our home screens for festival no.15 with a playful, thought-provoking assortment of screenings and special events, tailored for a virtual environment.

Audiences are invited to explore new ways of experiencing the festival, from short films over breakfast to film and drink pairings, joining a worldwide community connected through exceptional film.

Although Flatpack boasts an international programme, presenting work by artists and filmmakers from all over the world, Birmingham and the wider Midlands region plays an important role in the makeup of the festival. Below are some of the highlights featuring artists, filmmakers, and guests connected to the region.

The BAFTA-qualifying short film competition programme continues to be one of, if not the most distinct in the UK. Boasting over 30 UK premieres, and exploring all sorts of subjects.

Having won the BBC Young Jazz Musician of the Year Award in 2018, Birmingham born-and-bred Xhosa Cole has been making waves on the national jazz circuit, and has continued to pick up awards including Jazz FM’s Breakthrough Act of the Year last year. At the festival this year, Flatpack present Xhosa’s first foray into filmmaking with his audiovisual response to attending a BLM protest last year. The film plays in the Optical Sound Shorts programme.

Midlander Lauren Midwinter’s extraordinarily choreographed OOO plays in the Screendance competition programme, as to does Birmingham-based Avatâra Ayuso’s The Protocol.

Flatpack always endeavours to create special events, and this year’s festival is no different.

The ever growing Birmingham Collage Collective which includes artist Mark Murphy (who will be in conversation with collage artist Seán Hillen during the festival) will be delivering a zoom masterclass in the art form.

Joining forces with the Birmingham International Dance Festival, and independent curator and Birmingham-based filmmaker Sima Gonsai, Flatpack present two programmes of short films (several of which are UK premieres) that span both Flatpack 2021 and BIDF (which starts a few days later). The winner of the brand new Screendance Award will be announced at Flatpack’s awards ceremony on the closing weekend.

Starship Impossible with The Brothers McLeod

West-Midlands based BAFTA winning animators The Brothers McLeod have been extremely busy over the last year with their hilarious new web-series Starship Impossible. They will be presenting the series in its entirety for the first time during the festival and will also be giving a talk about their experience making it, as well as working with global media company Misfit.

Birmingham’s irregular Trash Film night features hosts David and Luke, with special guest Greg Sestero (who played Mark in The Room), talking the audience through the very best bits of one of the very worst films ever made: 2019’s Verotika.

Shorts and Hops with Digbrew

Teaming up with independent brewery DigBrew, Flatpack have curated a selection of classic short films paired with some of DigBrew’s finest beverages. Enjoy a pint of the very special Waka / Jawaka (named after Frank Zappa’s fourth album) while feasting your eyes on the mind-melting work of Zappa’s collaborator Bruce Bickford.

Delving into archives through screenings and discussions:

Black Country award-winning artist and filmmaker Billy Dosanjh chats to Nirmal Puwar (who grew up in Coventry), Reader in Sociology, at Goldsmiths, University of London about film and TV archives and drawing out the untold stories which can fall through the gaps.

General Public (Elizabeth Rowe and Chris Poolman) have been delving into the secret history of Birmingham’s adventure playground movement, and during this event present a chance to see never-screened archive footage of the city at play.

Premiere of a new short film combining archives, animation and newly recorded interviews, part of a heritage project around the Jewellery Quarter’s two iconic cemeteries at Key Hill and Warstone Lane. Followed by a Q&A session with the filmmaker Scott Johnston and the project co-curators.

A couple of events from Flatpack’s features strand…

Voices of Isolation – Reflections on the Windrush Scandal

Wolverhampton-born Sonita Gale shares scenes from her near-complete feature doc Voices of Isolation which reveals the vast social and economic inequalities in our system that have been further exposed by the pandemic, focusing in particular on how it has revealed the need for reform in the way our Black, Asian and Minority Ethnic communities are valued. She will be joined in conversation by social commentator Patrick Vernon, and Windrush campaigner Paulette Wilson’s daughter Natalie Barnes.

Beyond May, Flatpack will be busy with various summer outdoor community film screenings, their Wonderland project exploring the history of cinema-going in the city, interactive family project Colour Box at Home where audiences receive packs and zines, and an Autumn Weekender (24-25 September) full of actual live cinema events.

Flatpack Festival is produced by Birmingham-based charitable organisation Flatpack Projects, also responsible for a wide range of other projects and events throughout the year. The festival’s main funders are the National Lottery via Arts Council England and the British Film Institute.