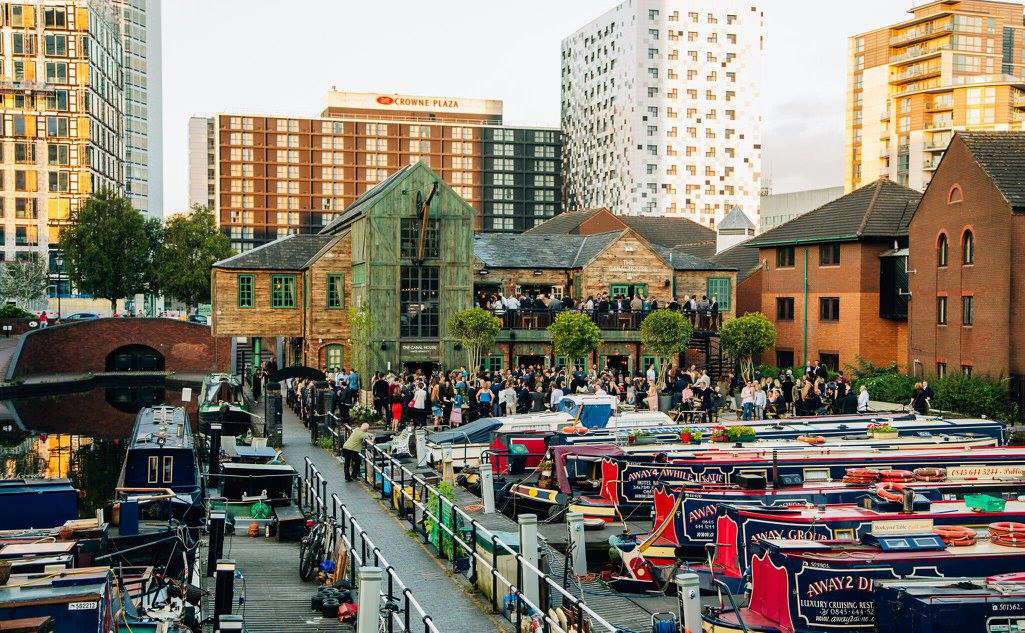 The Birmingham canals have evolved from their role as the beating heart of the industrial revolution to be a charming hub of culture and relaxation for all the family.

Birmingham canals remain a central point of the city and it’s no wonder that locals often proudly boast Birmingham ‘to have more canals than Venice’. With a junction in the trendy city-centre Gas Street Basin, the Birmingham Canal Navigations (BCN) stretch for over 100 miles and continue through Sherborne Wharf Marina and onwards through picturesque tunnels and junctions towards peaceful countryside. 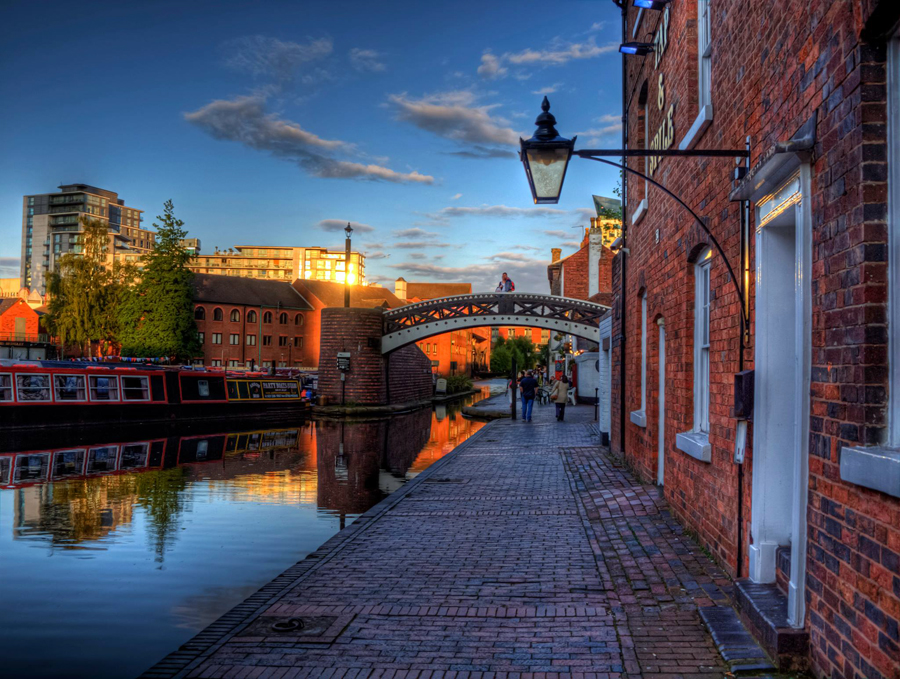 The canals played a crucial role during the industrial revolution when raw materials, such as coal and iron, were shipped on the canals. The first canal to be built was the Duke of Bridgewater’s Canal which was completed in 1761 and used to transport the Duke’s coal all the way to Manchester. Transportation via the canals continued until the advancement in roads and railway technology meant it was quicker and cheaper to transport goods over land; Cadburys were the last to stop transporting products from their factory in Bournville and all commercial traffic finally ceased in 1980.

More recently however, many of Birmingham’s canals have been restored and are a source of heritage and interest for all those who visit. The recently restored Roundhouse has been described as “a hidden gem at the heart of the canal network” and is the perfect example of heritage in the city centre. The incredible horseshoe-shaped Roundhouse is now a Grade II listed building, having been originally built in 1874 as stables for the horses which worked along the canals.

Running ‘walkshops’ throughout the year, the Roundhouse is a base from which visitors can enjoy the opportunity to further explore the canals on foot or by boat and hear more about the local stories and legends surrounding the canals. Next to the Roundhouse is The Distillery, a bar and restaurant with its own courtyard and gin terrace. With an onsite micro gin distillery, this is the perfect place for visitors with a keen interest in good food and alcohol. There are many other local canal boat trips available (Sherborne Wharf Ltd is one such company) which provide fascinating commentaries into the past of the canals whilst watching the local sights pass by. 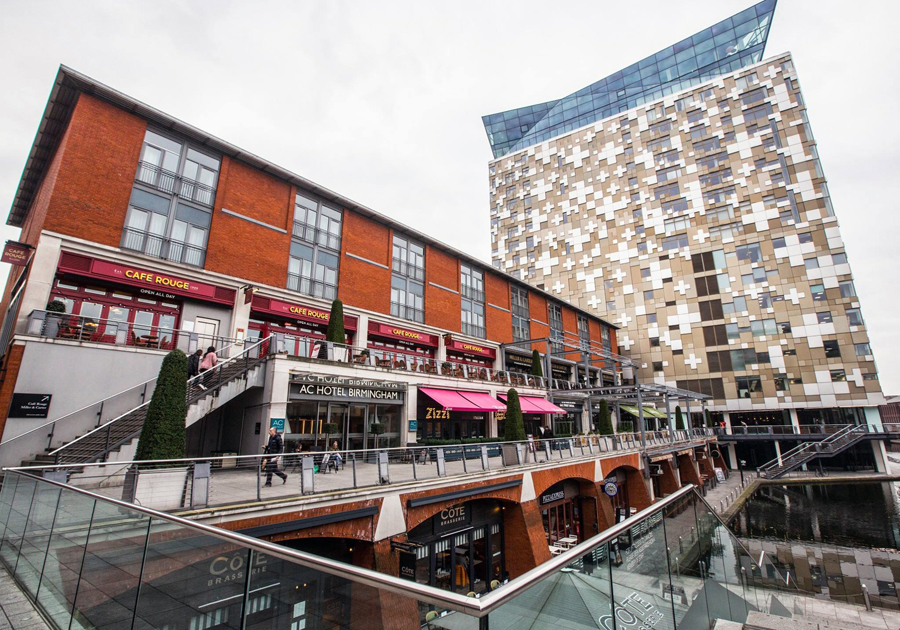 One of the most popular ways to enjoy the Birmingham canals is an evening spent visiting the numerous bars and restaurants for which the canals provide the perfect backdrop. Brindleyplace is a popular location for business and leisure, with many bars, restaurants, and cafes, and is named after James Brindley, one of the pioneering canal engineers. The Mailbox in Gas Street Basin is a trendy centre of luxury shops and restaurants overlooking the canal as well as being home to the cosy Everyman Cinema, making it the perfect location for an evening out.

The canals provide the perfect backdrop for peaceful walks as an escape to busy city life. For keen wildlife spotters there are many ducks, swans, and coots, and you may even be lucky enough to spot a Black Redstart or Peregrine Falcon. There are many access points onto the canal routes which locals, students and visitors alike use on summer evenings for jogging or cycle rides, many starting in the city centre with paths weaving towards more open countryside. There is a huge range of local pubs and restaurants (such as The Canal House or Tap & Spile) which are a great spot for a breather to pick up a drink or food.

For well-seasoned narrowboat owners, the Birmingham canals provide the perfect get away whether you’re looking for the peace of countryside walks or fancy mooring up closer to the buzz of the city. To discover more local heritage, the canals also wind through the Black Country, where a family-friendly trip to the Black Country Living Museum can be planned into your cruising route (UK Canal boating suggests a seven night cruise with two days to take in the sights of the city centre and museum). The open-air museum is a reconstructed canal village with attractions such as workshops and a mine where you can learn more about life in the black Country over 300 years ago. For licenced paddlers there’s also a canal trail from Cambrian Wharf ten miles to Shirley Drawbridge to be enjoyed. 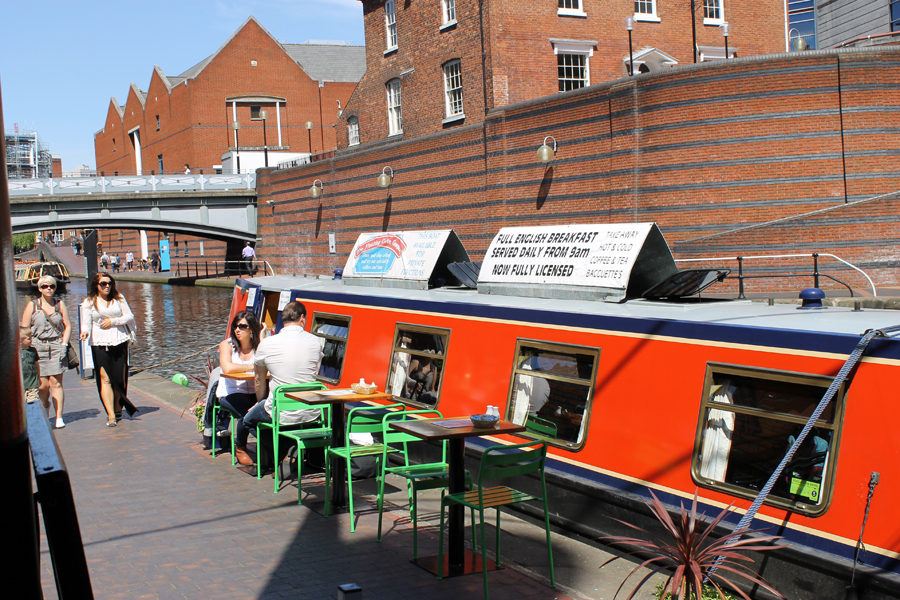 For those looking for something a little bit different, why not enjoy breakfast on a narrowboat? The Floating Coffee Co offers a hearty full English on board their narrowboat which can be found moored up at Brindley Place (from where you can also pick up the Waterbus service). Alternatively, an Away2dine restaurant boat may be just what you’re looking for when hosting your next party or corporate event.

The canals truly are one of Birmingham’s hidden gems and attract those who are looking for a bit of peace and relaxation, as well as the buzz of city nightlife.