Published by admin On January 26, 2017 Leave a response 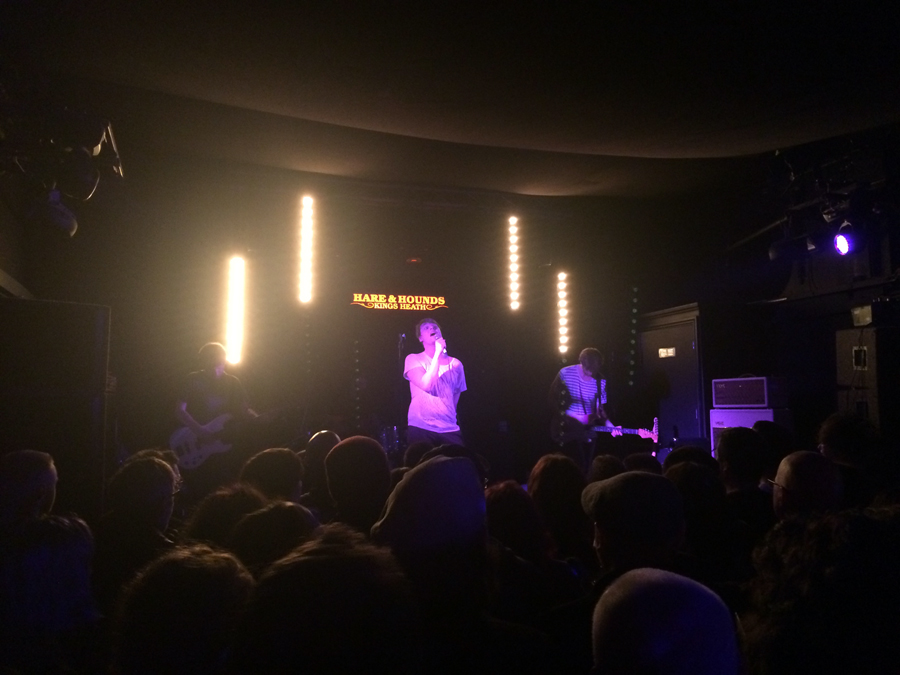 No frills, no fanfare, indeed no encore. The band with possibly the most misleading moniker in the history of music shuffle on stage and within a few seconds unleash a barrage of raging emotional dissonance. The crowd is instantly locked into a world of rage, pain and the mesmerising results of singer Dara Kiely’s past mental health issues. A bizarre lyrical dash through the Sunshine Ward, where the windows are barred and only the dark gets in.

It’s a collective experience, sweat pours, bodies shake and the glaze of psychosis is infectious. Instruments are not so much played as assaulted. Alan Duggan sets the tone with ‘Um Bongo’, his guitar screeching under the abuse of his torturing fingers, bassist Daniel Fox picks up the pounding rhythm and then comes the scream.

A great guttural wail of torment from Kiely that, should there have been the space, would surely have taken the audience off its feet. ‘Got into a fight with a pigeon’ is not a typical opening lyric but this is not a typical band. Words written during Kiely’s breakdown are jammed down the throat of Girl Band’s discordant anti-melodies, this is the sound of a crumbling psyche. Beware. The song ends tighter than an executioner’s garotte around the neck. Breathtaking.

‘Ate eight bananas and I thought about a jog’ it’s ‘Pears for Lunch’, a stream of consciousness lyrical meltdown through a broken mind railed over a sonic mountain of feedback and rumbling hammered bass. Kiely has hinted at his body dismorphia between songs, complaining about the heat but unable to take his tee shirt off because he has ‘too much of a belly’.

It’s a poignant moment as he howls the song’s refrain ‘I look crap with my top off’ jerking and tearing at his shirt animalistically twitching with emotional pain and mental anguish. Kiely reveals so much of himself in his music it’s a relief between songs to see him smile and display a certain boyish charm, joking that the set list was written on his hand he shows the huge black smudge of sweat where it once was.

‘The Last Riddler’ begins with a cacophony of guitar violence before breaking into a staccato race of noise with Adam Faulkner’s drums; Kiely’s voice is at its rawest, digging into the stark memories of doctors and anti-psychotic medication. Highlight of the set is techno cover version, ‘Why They Hide Their Bodies Under My Garage?’ A monumental blast of existential paranoia that builds a wall of unbearable tension with Kiely screaming to a crescendo until just before breaking point Faulkner drops the beat.

Relief and movement floods the crowd, they’ve been taken to the edge and they know it. There’s a blitzkrieg version of break up song ‘Lawman’, ‘everything about her was cunt-agious’, ouch. The band end with the epic ‘Paul’; a mess of writhing bass, machine gun guitar and vocals that range from spoken word statements to cathartic screaming delivered in a frenzy of sweat and energy. Then silence. It’s over. There are no encore calls, just exhaustion and joy that something very special has just happened.