Published by admin On September 29, 2015 Leave a response

It has been nearly two weeks since attending the pre-launch media breakfast on Thursday 24th September 2015, for the Grand Central Birmingham opening & John Lewis Ribbon-cutting. A date that will be remembered as the transformation and revival of Birmingham city centre.

Grapevine Birmingham was invited to the opening of the brand new John Lewis store and I had the task of heading down to cover the story on their behalf.

I was greeted by a lovely representative who guided me to the media arrival area by the escalators, where I was signed in onto the guest-list by another member of the team and received my press pass and press release. I then made my way over to the media breakfast area where I collected a glass of orange juice and took in the impressive view of Grand Central Birmingham.

As I captured various shots of the different stores prior to the launch, a team member of Jones Bootmakers greeted me with a goody bag – A nice start I thought! Some of the new stores that opened this day were Cath Kidston, Hobbs, Joules, The White Company along with enticing diners like Tapas Revolution, Crepe Affaire, Pho, Square Pie and Frizzenti – The first to open in Birmingham city centre.

The media buzz quietened down as the official speeches were underway before the official opening. Grand Central General Manager Jonathan Cheetham and Leader of Birmingham City Council, Sir Albert Bore addressed the excited crowd of journalists and press reporters.

The speeches highlighted and reflected the press release:

This has been brought to life through a culmination of a dedicated, committed group from across the city. It’s a proud day for Birmingham and demonstrates our continued retail power to bring these high quality shops and restaurants to the Birmingham consumer, marking another chapter in the on-going renaissance of our great city. – Jonathan Cheetham, Grand Central Centre Manager

The arrival of Grand Central provides even more shopping and dining choice for people in the city centre. With its stainless steel facade wrapping around the entire building, Grand Central makes an impressive impact on Birmingham’s ever improving architectural landscape. The creation of over 1000 jobs in retail, hospitality, catering and customer service also provides a significant number of opportunities for local people. – Sir Albert Bore, leader of Birmingham City Council

The years of wait have been well worth it. Not only is New Street Station a magnificent new development for passengers and commuters, but Grand Central also offers a unique and unforgettable shopping experience for all. We are proud that Birmingham is at forefront of such an impressive aesthetic design which will be enjoyed and admired by people across the UK and worldwide. – Richard Brown, Grand Central Development Director We then witnessed the ribbon cut take place in front of John Lewis, along with the first customers being welcomed into the store. Everyone captured the moment – It was an exciting time, so why not!

The John Lewis store that opened is one of the largest stores in the UK. It features a lovely spa and restaurant too! I simply adored the modern, contemporary vibe with the décor, merchandising style and little touches. I noted the slogan signs placed in various departments to convey the style of item or dress. ‘Suited’ and ‘Dandy’ were placed tastefully in the formal clothing area.

Another display in John Lewis I loved – The colourful sweaters styled in a vibrant, smart and chic way. How super-stylish!

Here are some questions I was intrigued to find out the answers to, kindly answered by Andy Street – John Lewis Managing Director / CEO.

Q: The finished result looks amazing! Did you face any challenges along the way that you overcame?
A: The biggest challenge was building over a busy railway station – but the outcome is indeed very pleasing.

Q: Did the end result meet or exceed your expectations?
A: Exceeded. We think it is the best shop we have ever built.

Q: Where did the idea of this fantastic transformation originate from – was there more of a purpose behind it other than making New Street Station a ‘shopping centre central’ of Birmingham.
A: Oh yes, we always knew that this could become the meeting point for the whole of the Midlands.

Q: I love the contemporary touches and modern feel… Where did your inspiration for the design derive/stem from?
A – It all comes from my own in house Design team.

A Destination for the Stylish Modern City! 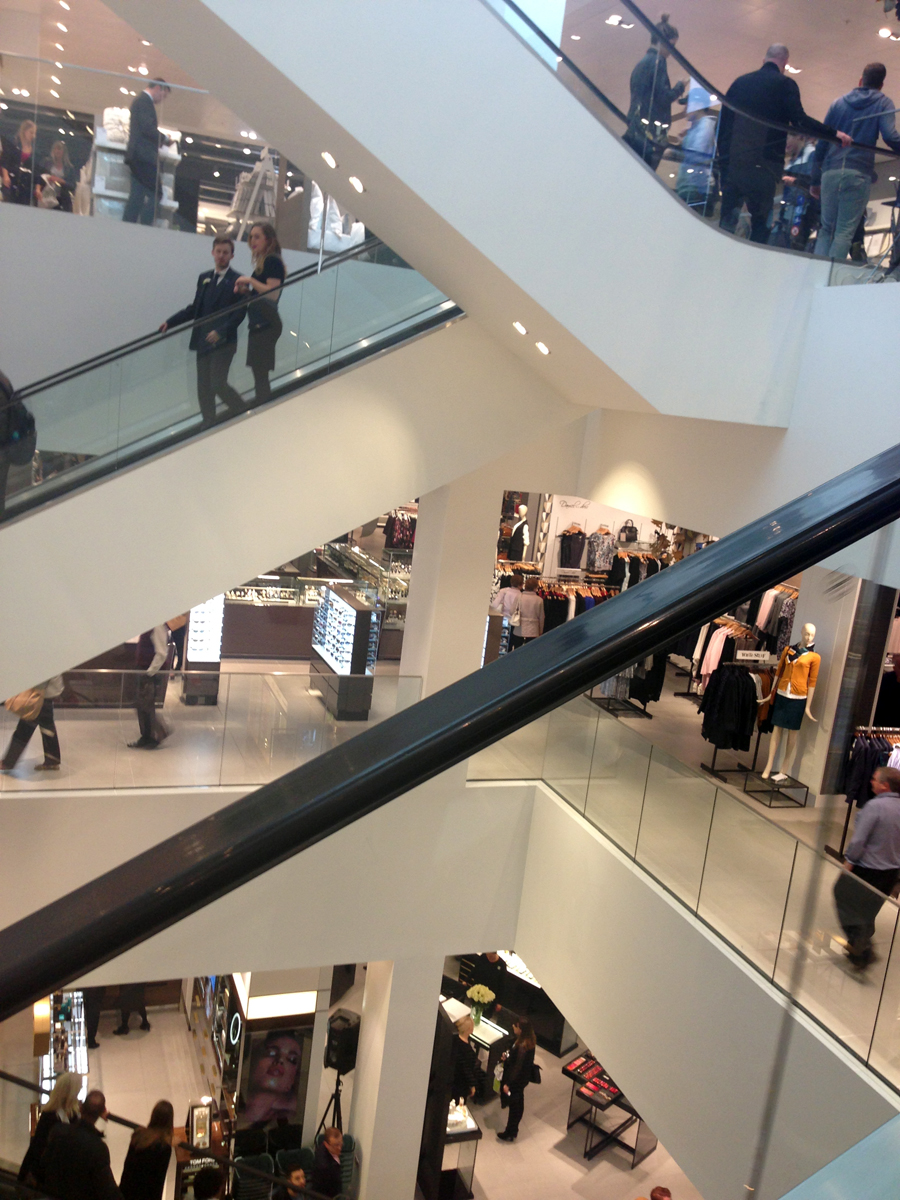 Shortly after the John Lewis ribbon-cut, there was a Flash Mob performance in the Grand Central space that was pretty cool, and added some authenticity to the Grand Central opening, as this city is known for its urban, funky, arty style.

A great deal of emphasis has been focused on the design element, and visual merchandising, in terms of Grand Central’s style, as well as in the stores and restaurants featured – Beautiful, unique and stylish!

There was more of a reason behind the transformation of New Street Station, and building a John Lewis; apart from making it visually enticing and having recreational purposes, one of the other significant reasons was to revive the economy in and around the city!

Grand Central by name and, grand by nature! Spacious, modern style and feel… A true city vibe! It’s all about innovation, luxury, creativity/art and contemporary based on Birmingham’s people to make it more personal, homely and filled with passion. Grand Central, is bringing a new edge to Birmingham, that is both stylish and practical.

The station feels safe and inviting to the locals and outside visitors too. I feel that by incorporating and supporting independent stores,it is also a significant contributing factor to the successful launch and the further development of Birmingham’s independent offerings.

In years to come, we will look back on this day of transformation and creative development, that has painted over the walls of dull, economic struggles and times of recession – We will be grateful for the creativity, support, and choice that has put a spark back into Birmingham and its society.

Well, for now, let’s get prepared for all the hustle and bustle of the Christmas shopping frenzy and festivities. What an advantage for the launch to have taken place now, ready in time for Christmas.  When making your way down to Grand Central Birmingham, be prepared for all the buzz and commotion – With the atmosphere it has struck up, it is a place everyone would want to be… Am I ready? Yes, course! I am a city girl at heart.

What an incredible journey to be a part of… Wishing Grand Central Birmingham, John Lewis and all the other Grand Central retailers all the best.