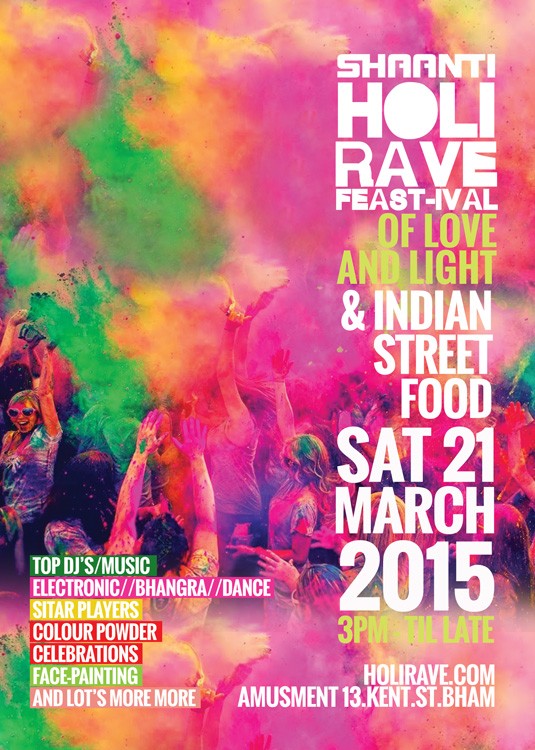 Celebrating the official festival of colour Holi, and marking the arrival of Spring, Holi Rave Feast-IVAL presented by Shaanti, takes place on Saturday 21st March at the brand pop up warehouse concept Amusement 13.

First to headline HOLI RAVE –Feast-IVAL’s magnificent stage will be My Panda Shall Fly, whose recent triumphant at House of Vans in Berlin, return to form has been welcomed by fans and critics alike. In between appearances on Vice, Rinse FM and Boiler Room, and various festivals like BBC Hackney Weekender, Outlook Croatia and Glade, My Panda Shall Fly has released a plethora of truly eclectic material, avoiding genre confinements along the way and proving difficult to define in every sense. 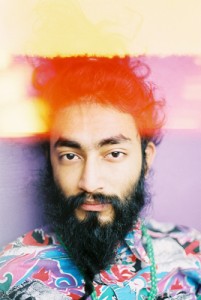 Where as Sinbad Phgura from the Twilight Players. The UK-based dancers, who’ve developed an unique style of dancing inspired by 1970s Californian dance crazes and elements of American Funk, Ska and freestyle, have performed all across the world and have worked with some of the biggest names in music and film from Madonna to Wyclef Jean. Sinbad will be playing a Slick, Sharp and Dynamic! with a heavy dose of showmanship to a Hepcat soundtrack of Cinematic Schmooze, Bebop, Jazz Ska Funk Indian Disco & all that good Stuff!

Fast forward to Bhangra pioneer Surinder Rattan who will also will take to the stage, this performance will be a rare chance for festival goers to witness one of the most influential producers of all time performing new-music with Birmingham based MC Cheshire Cat who has worked with Leftfield on ‘Release the Pressure’ and Rhythm Stealth.

Still trying to catch the floor running from an worldwide release, multi-award winning, Chart-topping Swami, have proven themselves to be one of the UK’s most dynamic and accomplished bands of recent times. Having grace the scene with hit after hit this electronic desi band will be banging out some class-cuts from their record box.

The festival will also be showcasing hot new artist SKA from Shaanti/Eastern Electronic Festival, one of the most exciting producers to hit the scene. With her remix Do It Again, by Swami due to out on 11th February, followed by a Single and EP release in summer. This fearless lady will grace the decks with an electric thrilling set, celebrating past, present electronic dance scene as well as dropping some future sounds, expect the unexpected from this pioneering lady. 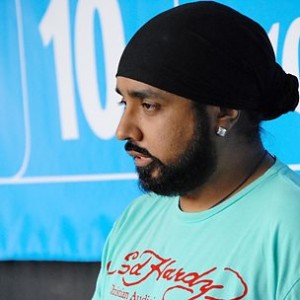 Having recently toured the world with Asian Dub Foundation, Prithpal Rajput, Founder of Minstry of Dhol and his collective of live drummers will demand the stage with the sounds of the Punjabi roar! Combining cutting edge musical progression with traditional Bhangra roots, the Ministry of Dhol are a percussive force with no equal.

Elsewhere amongst the programming will be Sitar Players, Colour-Powder Celebrations, Glitter-Bombs, free Indian Goddess and God Face-Painting, Henna Tattoo’s, a Fancy Dress Competition together with some of the hottest DJ’s from the scene including, Boy Chana (Bhangra/ From Soho to the Punjab Book-Exhibition), Amit Doc (R&B) and They Call Me Jack (Fidget Records/Commercial House.)

Here they will celebrate the amazing multiculturalism of the street food scene and will present a tantalising selection of mouth watering treats. Visitors to Holi Rave will have the chance to sample gourmet bites from a selection of street food vendors, while local restaurants will be brining the best of their menus to the venue with pop-up stalls. 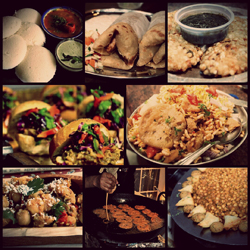 Manga Singh, MD of Taste and Founder of Liquor Indian Street Food Feast-IVAL says; “Shaanti is always exciting, because they offer a very tasteful selection of events. For us it’s an honour to launch with their second festival Holi Rave –they’re unique and you know they’re going to put on an incredible event. Combining their love for music with our love for food gives the public a great way to try lots of different world flavours and sounds without having to leave Birmingham.

Indian Street Food Feast-IVAL also provides an opportunity for start-ups and small businesses to get out their and give it a go – without any overheads, it’s important to support local chefs and produce – it’s an idea setting to engage with new customers face to face and introducing new and exciting dishes from Bombay to Calcutta, from Lahore to Birmingham. “ he ends.

For further information please contact Amanda Khan on music@shaanti.co.uk or if you are an Indian Street Food Vendor, performer, dancer or would like to volunteer then please contact 07968260276. 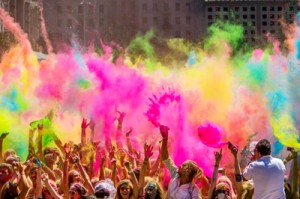 Holi is a festival that celebrates Krishna, and the legend of Holika and Prahlad. Some believe the origin of the festival lies with Krishna who was very mischievous as a young boy and threw coloured water over the gopis (milkmaids) This developed into the practical jokes and games of Holi.

The story of Prahlad is seen to symbolise good overcoming evil and is why traditionally bonfires are lit at Holi. Prahlad was a prince. His father, the king wanted everyone in his kingdom to worship him. But Prahlad refused and worshipped Lord Vishnu instead. The king’s sister Holika, who was supposed to be immune to fire, tricked her nephew Prahlad into sitting on her lap in a bonfire in order to destroy him. But because she was using her powers for evil, the plan failed and Prahlad emerged from the fire unharmed, while Holika was devoured by the flames. In some parts of India effigies of Holika are burnt on the fire. Ashes from Holi bonfires are thought to bring good luck.

Multi Award Winning Shaanti was responsible for hosting some of the biggest events in Europe, with artists such as as Nitin Sawhney, Talvin Singh, Wiley, Midival Punditz (India), Fun-Da-Mental and Asian Dub Foundation. They were also responsible for promoting the largest monthly program of South Asian Music in Birmingham, London, Europe and India in the last 19 years.  Past clients include working with Ministry of Sound UK, The Big Chill Festival, the British Film Institute, BT Rivers Festival, Raju Dixit Tour, Channel 4, Galaxy Radio, Radio 1, ITV, O2 and loads more to running their own record label Shaanti Play and hosting the Eastern Electronic Festival, a month-long music development festival in Birmingham.

About Manga Singh from Taste and Liquor

Manga Singh, is a respected award winning events promoter and food-leisure consultant.  Recent independent projects include running number of bars and clubs in Birmingham including The Hockley and the award winning Vaults Bar and Restaurant (2010 – Jan 2014 .) His company Edit & Create, a Leisure, Entertainment & Marketing consultancy and Taste & Liquor, is a bespoke pop-up bar service that includes cocktail classes for corporate and weddings and private wine-tasting for the fine diner. Past clients have included East End Foods and The International Convention Centre. Taste and Liquor Street Food Feast-IVAL will be launching every Saturday from April 2015.