Home » Around The Web » What’s the secret behind Mo Farah’s success? 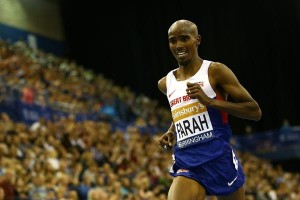 Mo Farah is probably Britain’s most liked performance athlete. Friendly, relatable and with a winning sense of humour; when Mo won double gold at London 2012 (in the 5,000m and 10,000m events) his “Mobot” celebration came to epitomise the human spirit of Olympic competition.

Farah burst onto the scene reasonably late in his career – it was assumed by many that London 2012 would serve almost as a last hurrah before moving on to marathon distances and eventual retirement. However, in the 3 years since, he has continued to impress; going on to set a European 1500m record and win double gold at the European Athletics Championships in 2014.

However there was one achievement which has eluded Mo throughout his career, until now at least – a world record. That oversight was finally corrected last Saturday when Farah won the Birmingham Indoor Grand Prix 2 mile event in a time of 8 minutes 3.40 seconds – shaving almost 0.5s off the previous record set in 2008.

Mo Farah is clearly a very talented athlete, but just as important is the way he trains and prepares for big events. Prior to 2011 Farah simply wasn’t achieving the results his ability deserved; until he began a now famous partnership with coach Alberto Salazar; whose help has propelled Farah to a new level.

Salazar introduced Mo to the idea of integrating more resistance training in his workouts; which he had previously skipped entirely. Distance runners typically have a slight build, low body fat and less prominent muscles than sprinters but limited weight work; such as carrying weights while running, can help boost stamina.

Elite competition also requires the right diet – heavy on carbohydrates and lean meat; not so much on the fat and sugar! Carbohydrates give long term energy reserves which help fuel gruelling training sessions, while protein is involved in building and maintaining muscle tissue. Although Mo has appeared on BBC Food to share some of his recipes, the key components of his specialised diet are still a trade secret.

The amount and time that we sleep has a big impact on athletic performance. Early risers peak physically earlier in the day compared to night owls; and this has a measurable impact on athletic performance. Circadian training, timing workouts to coincide with the time of competition, was considered by Joey Barton to be an advantage during his time in France and is gradually becoming the norm in professional sport. Farah has described how Kenyan athletes he trained with had very fixed ideas about training and sleep schedules – but he also adjusts his sleep schedule to account for travelling and time of competition.

With a world record under his belt and status as a British sporting hero assured (if it wasn’t already); Mo Farah has achieved enormous success through a combination of hard work, vigorous preparation and talent. Who knows what the future holds for this “smiley superstar” but whatever it is he’ll have legions of fans wishing him well.