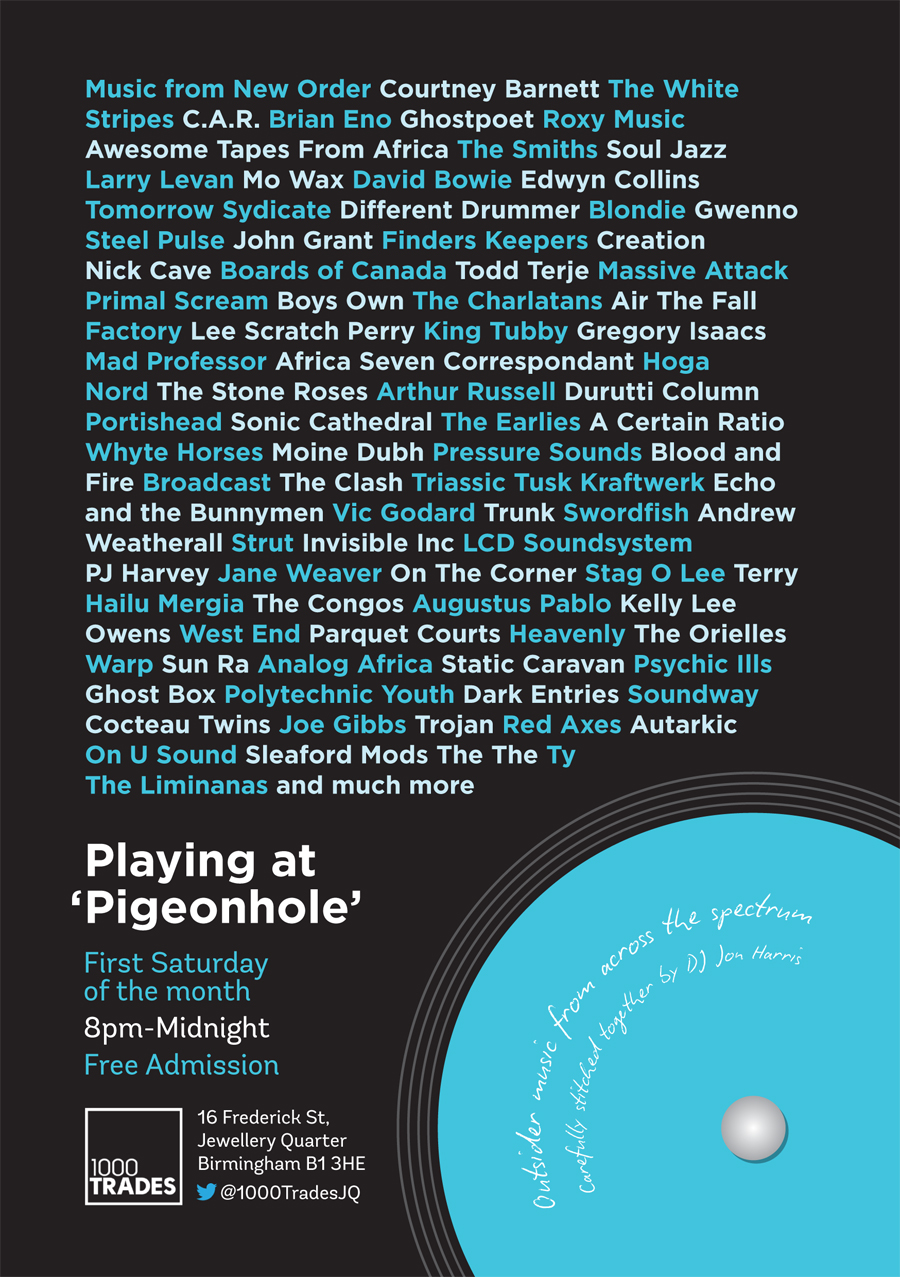 Jon Harris has been DJ’ing since 1990. Through that first decade he was a resident at various nights at clubs such as The Que Club (The Bubble Club), Bonds (Digital Dream), Snobs and pubs such as The Foundry. Jon also ran a record label, promoted other club nights and worked part-time at Swordfish Records. He used to play at various events around the country. The music that Jon played in the clubs was mainly more underground house and techno with a residency at The Foundry where he played a more eclectic mix of music. This night was called ‘Pigeonhole’ – outsider music from across the spectrum.

In 2017 Jon decided the time was right to start DJ’ing again more regularly. He revived ‘Pigeonhole’ at 1000 Trades in August 2017 and has just passed two years doing that night there.

The main features are a mixture of; Electronic music, Indie, house, dub and reggae, African music, disco and other more leftfield underground sounds. He tries to create an environment where people go to hear music that they have never heard before but want to find out more about alongside music that they know and love but don’t hear out that often. The tempo of the night is based on the crowd and how things are going! It usually starts slow and builds up. The attached poster for the night lists many of the bands, artists, labels that you will hear over time.

Alongside Pigeonhole, Jon regularly does the ‘Credible 80’s’ night at 1000 Trades – Nowham, and plays alongside bands for This Is Tmrw at The Hare and Hounds. He also plays at the Make It Reggae events at The Night Owl (most recent one was Sunday 11th August)

Since November 2018, Jon has been working with George Bate as Coughing Pigeon. They have a weekly show on Brum Radio – Friday 6-8pm – and do various gigs together. George also has a monthly radio show – 80s Rampwalk – on NTS. The duo are currently looking for a fairly regular post show Friday residency. A link to a recent solo show is below as is the link to all of their archived shows. Recent and forthcoming gigs at The Hare and Hounds are on August 13th with Minami Deutsch and August 31st supporting local band, Matters and various others. They have also supported Damo Sazuki, Tirzah, and many others.

Link to all past Coughing Pigeon shows: