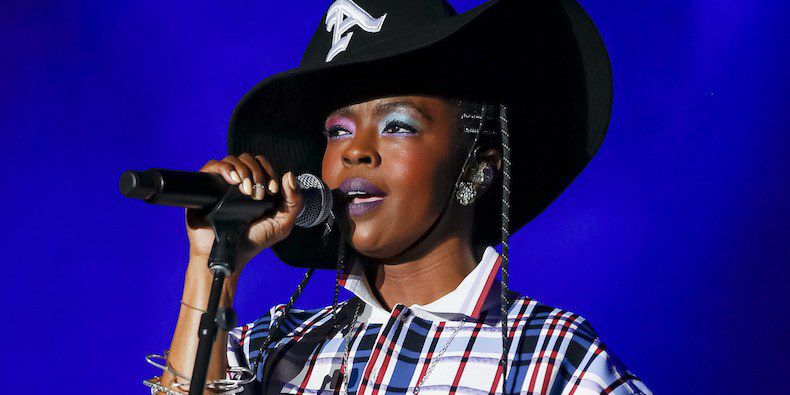 ‘As we all know, The Miseducation of Lauryn Hill came out in 1998. So you’re either from that era or your parents are,’ said Hill’s DJ Reborn announcing the ‘living legend’ on to the stage.

1998 was, perhaps, the last great year for hip hop: OutKast’s Aquemini; Gang Starr reappearing with Moment of Truth. Then there was Lauryn Hill.

In celebration of her seminal and only solo album ‘The Miseducation of Lauryn Hill’ the crowd here tonight were here to witness the queen of neo-soul – who in great style still refuses to turn up on time for class. Remember, this was an album that flew straight to number 1 in the Billboard charts, won five Grammys, and broke the record for first-week sales by a female artist.

Swaggering on stage an hour late (it was two in Paris), the 43 year old dressed in idiosyncratic style; full-length metallic trench coat over a maroon roll-neck and high-waisted trousers, complete with sparkling platform shoes, copper eyeshadow, and a black net head-dress over tightly cropped hair.

Hill instantly mesmerised and took the crowd’s undivided attention with ease, each song in her trademark gravelly timbre. These are unapologetic songs about love, self-respect, race, and retrospection, still as relevant today as they were when the album was released in 1998.

The powerful, hurt-filled ‘Ex Factor’ was a highlight, as was her cover of Frankie Valli’s hit ‘Can’t Take My Eyes Off You’. Meanwhile, reggae-inspired jam ‘Forgive Them Father’ sounded just as fresh as today, no least because of the political message within it. Projected behind her were huge screens showing police brutality against black protesters.

An emotionally-charged performance of To Zion, the track written for her first-born son to Rohan Marley, who was attributed to helping inspire the album. There was also a dynamite rendition of Roberta Flack’s “Killing Me Softly” that rendered the crowd quiet.

Hill is in charge. She commands the stage, waving wildly to the sound guys to turn up the guitars, or turn down the keys during each pitch-perfect performance. And yet, there was a more humble and humane Hill on show, who took time to repeatedly thank her fans for two decades of support.

After the show as I walked out, a spontaneous burst of song – “Killing Me Softly” – rung out across the Arena. Now that is a compliment to one of the best artists in the game right now.