Home » What's on » Let the light ones in: Longbridge Light Festival review

Let the light ones in: Longbridge Light Festival review 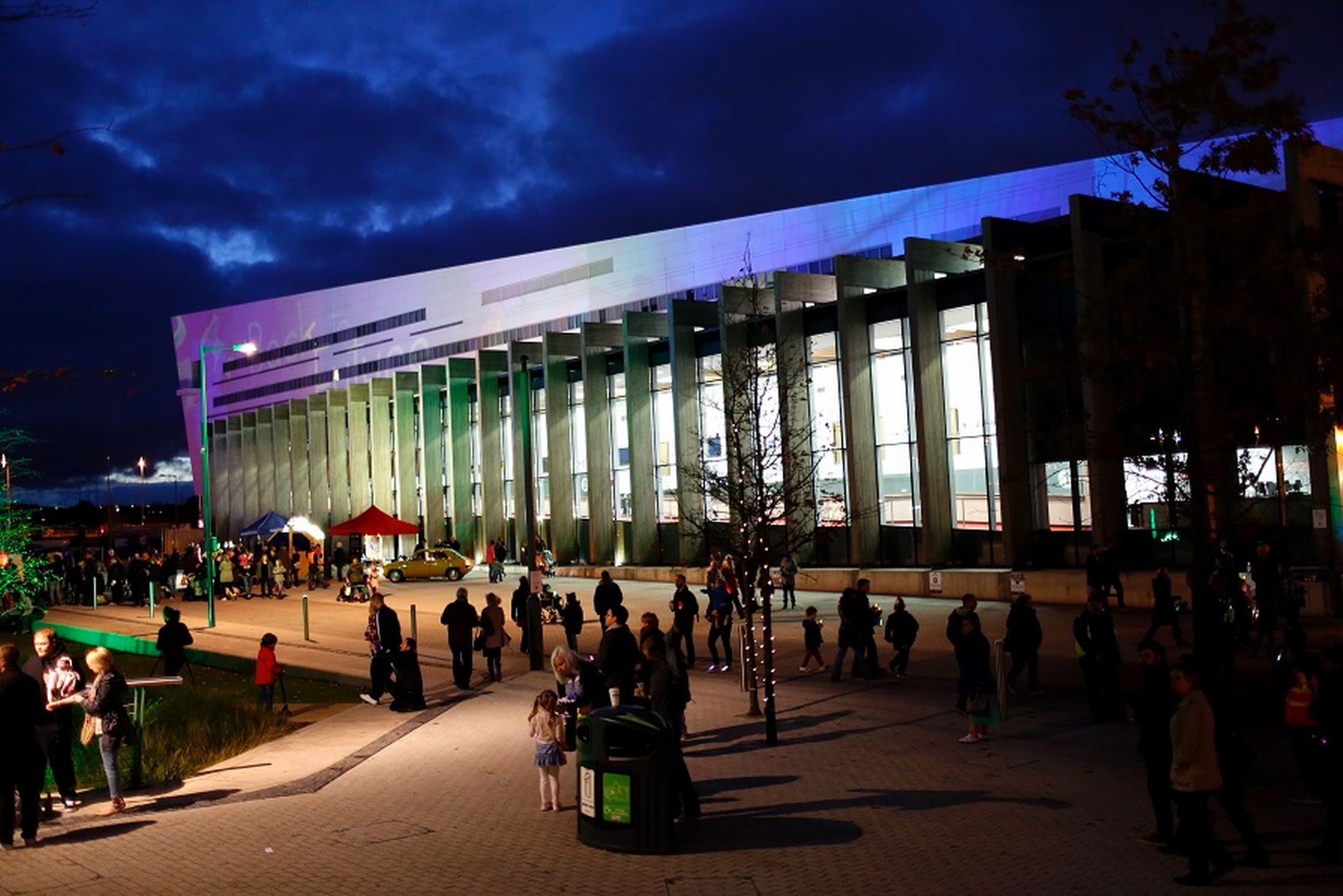 The Longbridge Light Festival that took place at the end of October might, perhaps, not be the last one. At least that was the idea; the plan was that eventually Longbridge will become a destination, somewhere people visit on purpose, rather than just pass through on the way to the Lickeys. How successful that aim will be remains to be seen, of course. The Light Festival, though, was a good start. 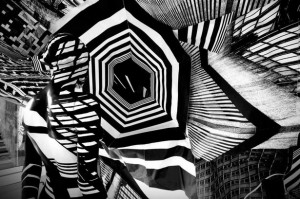 In my dedication to seeing as much art as possible for free – if the Arts Council are already funding it then why should I? – the bits of the festival I saw were all outdoors. And cold. But I don’t think the organisers had much to do with the ambient temperature so I’ll set that factor aside.

To get in as much free art as possible, we cycled to Longbridge via the Rea Valley route so we could see the science fiction trail, which had been lit up by homemade light crafts made by artists and children at workshops. The most impressive of these were the big chrysalis type structures – they looked like aliens or massive moths were pupating inside them, ready to emerge and stretch out their huge, dusty wings. They were really creepy and cool and I could imagine a great sci-fi horror film unfolding in the woods (but then I get that feeling in Birmingham quite often anyway). 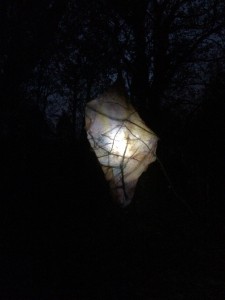 The woods were transformed by hundreds of glow sticks hanging from branches, plus stacked up Tron lights that made it look as if some kind of neon hi-vis tribe had been having a pow-wow nearby. The only thing that let the sci-fi trail down were the people going around collecting up all the glow sticks and dismantling the art as we went around – as it had only just gotten dark (it wasn’t long after 6:30pm) it seemed a shame that the effect was being taken apart as people were still trying to take it in. Perhaps there’s some kind of local glow stick bi-law that forbids them decorating the area past a certain time. Are they worried they’ll attract 90s hippie ravers and the place will resound with the toots of whistles and happy hardcore all night? That’s a scary thought, but there is such a thing as over-legislation.

Helpfully, the rest of the route was also lit up by more glow sticks, including some in bottles of water that refracted the light and gave off a soft, almost ethereal glow. From there we continued to the centre of Longbridge, by Bournville college, where there were more light installations to look at, including projections on buildings and objects. Stones with drawings on them that moved when the colour of the floodlight shining on them changed were simple but impressive, while a complicated wood and metal sphere would have been, probably, if it had worked. Whatever it was supposed to do it didn’t, but it did look quite cool hanging there. 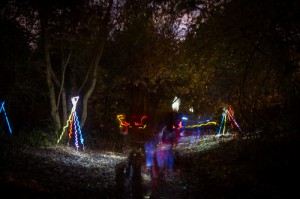 There were also video installations and a sound system that played disembodied noises, not quite music, that reverberated through the area and was really effective. The theme for the festival, back to the future, was well chosen, and the whole thing felt like a low budget set for an indie science fiction flick; it even had a load of cables winding around the paths and people in tabards complaining into walkie talkies. Initially I wasn’t especially optimistic about the premise of the festival; attempting to make somewhere into a destination by putting on one big event seems a half-arsed effort doomed to failure, but there was definitely a buzz, despite the chilly evening weather. 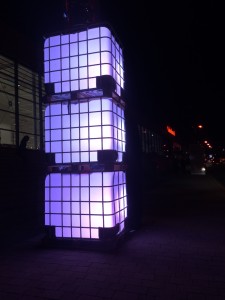 Including and encouraging people to cycle to the event was a good idea, and we saw quite a few people on bikes, including children. For an area often heavily associated with automobiles, all big 70s gas churners with chrome fittings and fluffy dice in my head, bringing in bikes was a good move. A new association with cycling suggests that everyone is welcome, the area is more open and accessible even if you don’t drive, especially at a time when the city is actively funding and trying to encourage cycling.

There were more attractions and art spectacles to look at as part of the festival, including performances and exhibitions that seemed busy and popular. Though the festival was definitely family friendly, it still had some edge and was more than just badly drawn robots and sellotape covered crafts, which, given the flyer for the event, had seemed a distinct possibility. It managed to hit just the right note; inclusive but still interesting and forward looking without dismissing the area’s legacy. Regeneration seems a definite possibility, even if all the event has managed to do is highlight that Longbridge has a shiny new shopping centre with lots of restaurants. The real proof of the festival’s success will be whether it all happens again in 2015 or not. Watch this space I guess.