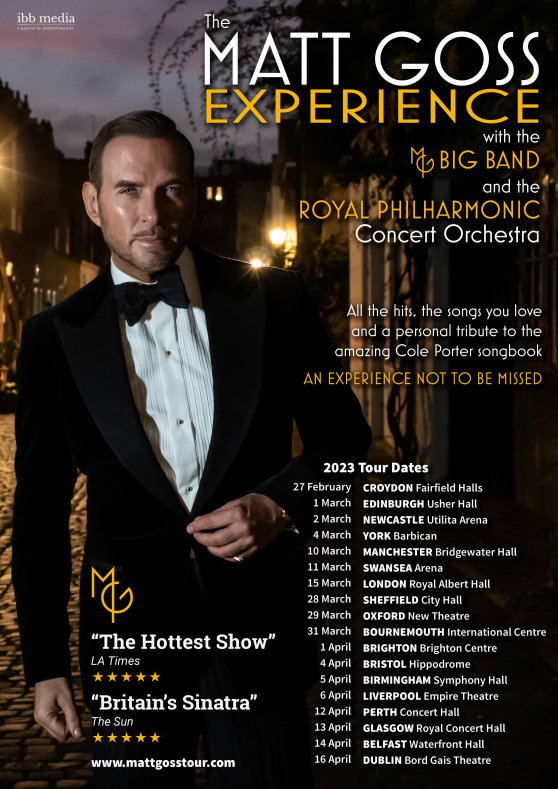 Matt Goss, the legendary Bros frontman, is returning to the musical stage in the UK following his recent appearance on Strictly Come Dancing and an 11-year Las Vegas residency, with brand new music and major touring activity planned for 2023.

The UK tour, which begins in Croydon on 27th February and includes a date at the Royal Albert Hall in London, will feature Matt performing his biggest hits, new original music, and his own personal tribute to one of the greatest songwriters of all time, Cole Porter in a dazzling new set of arrangements with the Royal Philharmonic Concert Orchestra and 15pc MG Big Band.

A new album with the Royal Philharmonic Orchestra will follow in June, which is being recorded at Abbey Road Studios.

As well as the Cole Porter songbook, the tour will also feature some of Matt’s original songs plus hits like ‘When Will I Be Famous’ and ‘I Owe You Nothing’, rearranged on this tour for orchestra and big band.

All of Cole Porter’s greatest hits, including ‘Night and Day’, ‘Love for Sale’, ‘I Get a Kick Outta You’, ‘Begin The Beguine’, ‘Miss Otis Regrets’, ‘Every Time We Say Goodbye’, ‘I Got You Under My Skin’, ‘Lets Do It’, ‘Anything Goes’, ‘I Love Paris’ and many more will feature through the show, all given Hollywood glitz and glamour in what promises to be a sumptuous concert evening, by the singer dubbed “Britain’s Sinatra”.

“Cole Porter is one of the greatest ever songwriters, his catalogue of work is incredible and timeless. To take these beautiful songs with fresh, stunning arrangements breathes a whole new life into every one of them, and it is my honour to be paying such a wonderful tribute to a great man. The fact that I am backed by the Royal Philharmonic Concert Orchestra and the greatest big band in the country, makes this even more of a special occasion.

Everyone will have a great time putting this stunning show together and I look forward to welcoming fans, young and young at heart, to all of the dates in our tour. Before the tour kicks off, we shall be recording the show album at the world-famous Abbey Road Studios, and this will be available for pre-order, ahead of its release in June 2023. I am so proud to be back on the road again here in my home country and look forward to meeting each and every one of my fans around the UK on this tour.”

Preceding this, Goss has also released his brand-new single, recorded with the Royal Philharmonic Orchestra ‘The Beautiful Unknown’ which is out now.

The song is about embracing the uncertainty that lies ahead rather than fearing it. Matt would like the nation to embrace the positive message and “raise a glass” to The Beautiful Unknown. Matt encourages his fans to post videos on social media, raising a glass ‘to the Beautiful Unknown’ using the hashtag #thebeautifulunknown. All of the videos will feature on Matt’s social media channels.