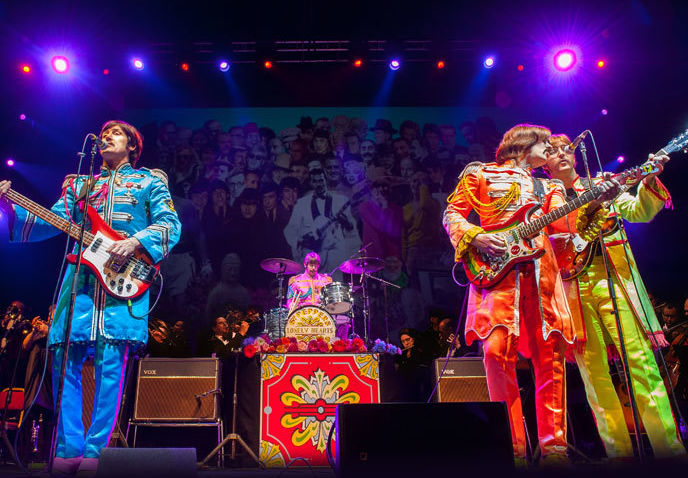 “Once you’ve had a baby you’re a parent and immediately you go from being a madman (cool) to a mad dad (not cool). How can you be a dangerous, edgy rebel with a tiny, little daughter?” (Russel Brand)

Tony Award-winning star of stage, film, television and music Idina Menzel takes the audience through a special journey of songs from her latest album idina., as well as other classic pop and musical theatre favourites. Called “the Streisand of her generation”, Idina captivates audiences with her charm, wit and unparalleled vocal prowess.

Currently celebrating his 50th year as a professional musician, keyboard player, songwriter and broadcaster, Rick Wakeman recently made chart history when his Piano Portraits album became the first solo piano album to enter the UK’s Top 10. The show will include pieces from the album (Space Oddity, Wondrous Stories, Stairway To Heaven, Help) musical surprises and hilarious anecdotes from this well-known and accomplished raconteur.

THE BOOTLEG BEATLES IN CONCERT

The world’s most famous Beatles Tribute band returns to Symphony Hall with their stunning recreation of the greatest songbook of all time. Tracing the Fab Four’s journey through the sixties, every tiny detail is meticulously covered from costumes to authentic period instruments. Complete with a little help from their orchestral ensemble, this is a not-to-be-missed spectacular for ‘Beatlemaniacs’ of all ages!

In case you missed it… The Bootleg Beatles are coming to Symphony Hall on 6 June (Tue), together with the award-winning Royal Liverpool Philharmonic Orchestra to mark the fiftieth anniversary of arguably  the most influential album of all time, Sgt. Pepper’s Lonely Hearts Club Band!

The Big Birmingham Soul Night will emulate the classic soul nights of the 60s and 70s in Town Hall’s beautiful listed building, boasting a giant wooden floor, perfect for Northern Soul and Mod style dancing. Confirmed to head up this evening is legendary DJ Colin Curtis. A night not to be missed.