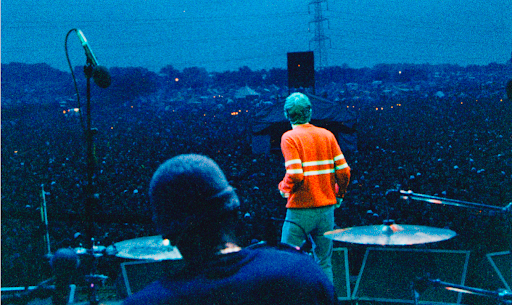 Acclaimed Director/Photographer Tony Briggs is very pleased to present an exclusive insight into the world of one of Britpop’s perhaps most overlooked bands: Ocean Colour Scene.

Available from Friday 9 September, Behind The Scene is a brand-new limited edition book that will look back at Briggs’ official photography work with Ocean Colour Scene at the height of their powers between 1995 to 1998. Released with the band’s full blessing, this bespoke hardback coffee table book will offer an intimate pictorial record of the band’s meteoric rise to fame through the period which saw them release the classic albums: ‘Moseley Shoals’, ‘B-Sides, Seasides & Freerides’ and ‘Marchin Already’.

Full of behind-the-scenes pictures, iconic album covers and never-before-seen images; Behind The Scene is also adorned with choice quotes from the band, stories from those who were there, plus a foreword by OCS’ founding guitarist Steve Cradock.

Across its 250 elegantly designed pages, Briggs beautifully documents the band enjoying the spoils of their long-earned chart success from the very heart of the action. From ecstatic scenes of the band ripping-out an embryonic “Hundred Mile High City” in the studio, to posing about London in gifted Mini Coopers, and the moment they walked out to 200,000 adoring fans at Glastonbury; there’s even appearances from contemporaries including Paul Weller, Liam & Noel Gallagher, Ray Davies, the England ‘98 Squad and more. Ocean Colour Scene’s momentous chapter in rock’n’roll is one worth revisiting and Behind The Scene re-opens it vividly.

This special limited edition art-photography book will be fitted in a custom slipcase, presented in a large hardback format, with its images reproduced in beautiful, high end, photographic quality. Designed by Pete Kelsey (who worked on the ‘Marchin Already’ album and all of the associated single artworks), Behind The Scene is an essential accessory for the band’s dedicated fanbase, plus anyone who remembers Britpop with a fondness – from the fashion to the festivals, the football to the faces that made it a pop-cultural phenomenon.

When asked why he decided to revisit his work all these years later, Tony said:“There really has been a lack of content, written or on-screen, about OCS, so I’m hoping to correct that. This book is a tribute to possibly the UK’s most underrated band and with the fans’ support, we can make a little bit of history.”

Funded primarily through Kickstarter, Behind The Scene is available to pre-order now here. 25% of all profits from the project also go to the International Rescue Committee whose work responds to all countries devastated by war.

A masterclass in rock’n’roll revisionism cited by the author as “a tribute to possibly the UK’s most underrated band”, Behind The Scene: Ocean Colour Scene Imagery & Imagination 1995-1998 will be released on Friday 9 September 2022.

Founded in Solihull in 1989, Ocean Colour Scene (OCS) are one of the biggest bands to emerge from the Britpop era. Notching-up five Top 10 albums (including a UK No.1 in ‘Marchin’ Already’, which toppled Oasis’ ‘Be Here Now’ from the summit upon its release in 1997), they have also scored a total of seventeen Top 40 singles and six Top 10 singles to date including major hits “The Day We Caught The Train” and “The Riverboat Song”. Over the years, the four-piece who featured Steve Cradock, Simon Fowler, Oscar Harrison, and Damon Minchella between 1995-1998 have worked with all manner of artists from The Spice Girls to Oasis to Paul Weller (with whom Cradock still regularly performs with). The band remain active (with Raymond Meade now taking on bass duties) and have released 10 albums to date, with their last effort ‘Painting’ released in 2013.

BEHIND THE SCENE: OCEAN COLOUR SCENE IMAGERY & IMAGINATION 1995-1998
BY TONY BRIGGS – IS RELEASED ON FRIDAY 9 SEPTEMBER 2022