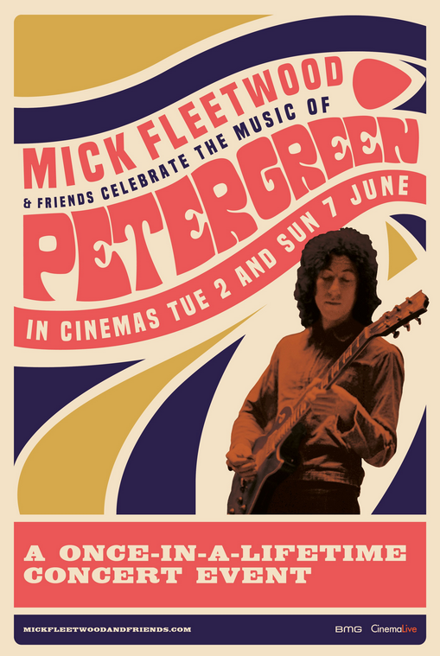 MICK FLEETWOOD AND FRIENDS CELEBRATE THE MUSIC OF PETER GREEN.

An incredible one-off celebration of the early music of Fleetwood Mac will be screened in cinemas across the country on Tuesday 2nd June and Sunday 7th June, as Mick Fleetwood and a stellar cast of guest stars pay tribute to the music of founding member, Peter Green.

Tracks performed at the event include seminal Fleetwood Mac classics, such as ‘Albatross’, ‘Green Manalashi’, ‘Need Your Love’, and more.

The Times gave the Palladium concert 5*’s, calling it ‘a unique treat’, whilst The Guardian called it a ‘rousing all-star celebration in their 4* review, and The Daily Telegraph hailed the show as the ‘rock ‘n’ roll equivalent of Avengers Assemble’.

Directed by award-winning concert director Martyn Atkins (Joni 75, Crossroads Guitar Festival, Cream at the Royal Albert Hall), the cinema event will feature an introduction by Mick Fleetwood, plus exclusive rehearsal footage, and interviews with guest artists. Legendary sound producer Glynn Johns, who produced albums for The Who, The Rolling Stones, The Eagles and Led Zeppelin, will take charge of the audio production.

Peter Green was a founding member of Fleetwood Mac and had a huge impact on the band, as well as being recognised as one of the greatest musicians in the world. Peter was inducted into the Rock and Roll Hall of Fame together with Fleetwood Mac in 1998. Rolling Stone magazine rated Peter as one of the 100 Greatest Guitarists of all time.

On the show coming to cinemas, Mick Fleetwood said:

‘This one of a kind show was no mean feat to put together and the ability to share and relive the event all over again in cinemas is incredible, for us, as artists, as well as our fans.

I’m very happy this performance can now be experienced in a big screen format by audiences far and wide all over the globe.’

Fleetwood Mac’s third studio album ‘Then Play On’, will also be released in a special Celebration Edition on 5th June 2020. Available in CD and vinyl formats, the release features original UK tracklisting plus four bonus tracks, as well as the vinyl edition pressed on 180g audiophile black vinyl, and new sleevenotes by Anthony Bozza including a personal foreword by Mick Fleetwood. The album was Fleetwood Mac’s last to feature Peter Green, and their third album to reach the Top 10.