Home » Around The Web » Our First Birthday 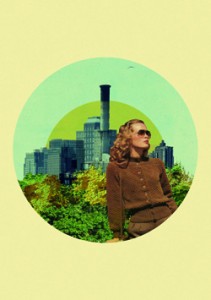 Grapevine Birmingham was first registered as a domain name on the 12th February 2012, the site was then launched in April with content gradually being added over the following months.

Web traffic has risen dramatically over that period with many loyal followers and lots of networking.. but more importantly plenty of positive feedback with people utilising the site and the listings to great effect.

2013 will see the launch of Grapevine London and Grapevine Manchester, and to celebrate our 1st year of existence here in the city of Brum, we have commissioned a funky little ‘special edition’ flyer, which will be handed out to various places listed on the Birmingham Grapevine to help spread the word.

The flyer design is the work of Nottingham based illustrator ‘Ricky Meehan’, for more information on Ricky’s work you can check out his website/gallery by clicking >>here 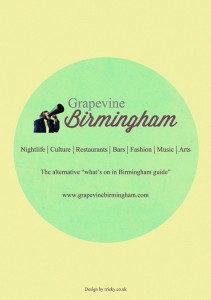 We also have a fab new “helper” at Grapevine Birmingham, who goes by the handle of ‘Bec Randle’, a student at Birmingham University.

Bec will be handing out flyers to local businesses who are listed on Grapevine over the coming months, and writing the occasional blog post on some of the more unusual and cool happenings in the city. Watch this space for more contributions by others too.

Grapevine Birmingham is now reaching out to thousands of people across the UK,  and is appearing on page one of search engines for terms relating to music, the arts, going out, eating out, fashion and visiting in the city.

We’ve had over 25,000 page views in the last 30 days, with 7,000 of those arriving as unique visitors. People are spending a great deal of time mooching through the website listings and they’re finding us through all the relevant search terms. The volume of visitors from Birmingham are almost equally matched by those reaching us from London, which shows the level of interest in the city at present.

Surprisingly, from looking at visitor statistics, the website also seems to be popular in the cities of Miami and Tokyo, strange but true.

Grapevine continues to carve its way through the ‘world wide web’, hopefully aiding locals and visitors to the city in their quest for the ‘cool stuff’. Don’t touch that dial.