Published by admin On June 2, 2016 Leave a response 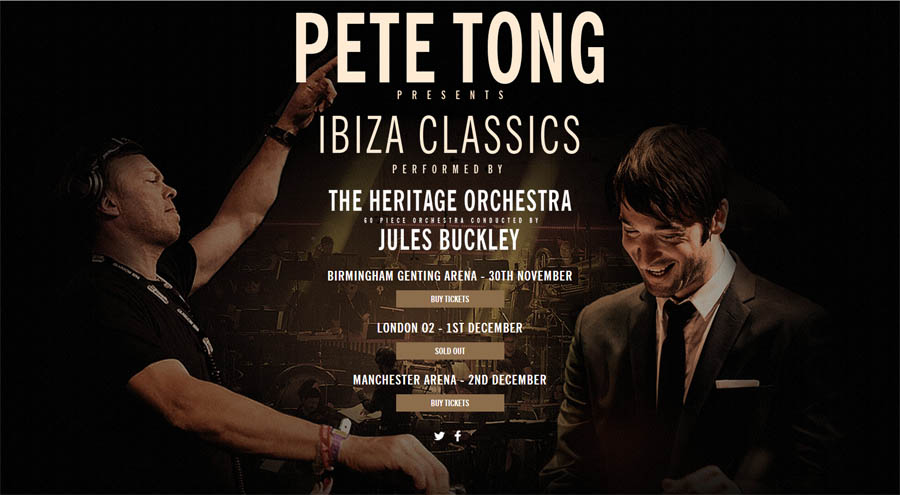 ‘A brilliantly packaged show, the Ibiza Prom energised and shook the sturdy old hall with a joyous, tribal vibe for a full 90 minutes.’ Radio Times

Due to phenomenal demand Pete Tong along with Jules Buckley and The Heritage Orchestra will bring Ibiza Classics to Birmingham Genting Arena on Wednesday 30th November. Having already sold out their London date at The O2 in December, they will also perform a show at Manchester Arena on Friday 2nd December.

These dates follow the incredible success of the BBC Radio 1’s Ibiza Prom at the Royal Albert Hall last summer. The prom was a musical homage to Ibiza. With its infectious, energetic brand of club music reworked by the 60-piece Heritage Orchestra, singers, and synths, directed by the acclaimed conductor Jules Buckley, this new arena show will promise once again to bring an unforgettable dance-party to London.

As the voice of Radio 1’s prestigious dance programming, Pete has held a commanding presence over the industry for more than two decades. His unique position has earned him a reputation as the global ambassador of dance music.

Pete will be joined by Conductor Jules Buckley, Artistic Director Chris Wheeler and The Heritage Orchestra. Composer, orchestrator and conductor Jules Buckley has made a name for himself as one of Europe’s most in-demand conductors of hip contemporary orchestral projects. Currently the Chief Conductor of Holland’s renowned Metropole Orkest and the Musical Director of the UK’s Heritage Orchestra, his daring approach to crossing and linking musical genres has brought him widespread acclaim. Buckley’s recent highlights include acclaimed collaborations with Gregory Porter, Tori Amos, Laura Mvula, Goldie, Markus Stockhausen, Michael Kiwanuka and UK house music duo Basement Jaxx and two Latin Grammy nominations.

The Heritage Orchestra is the orchestra that rocks out arenas, messes with other people’s music, and keeps orchestral tradition in the cellar. Since 2004 this renegade ensemble has collaborated with Aphex Twin, Tim Minchin, The National, Ben Folds, Anna Calvi, and regularly performs on the world’s most renowned stages from the Sydney Opera House to the Royal Albert Hall. They are unique in their use of sound, visual, and electronics, and they don’t play classical music; an approach that has defined them one of the most progressive and vibrant large ensembles around.