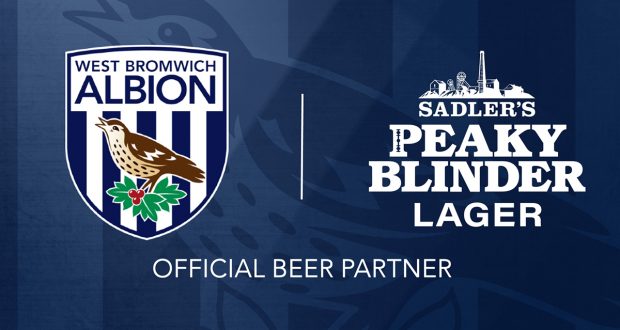 The deals will run for two seasons and coincide with the launch of its Peaky Blinder Craft Lager (4.1% ABV ) in new 330ml cans. Tapping into proven growing appetite for craft lager in can format[1], Sadler’s Peaky Blinder Lager cans launch at a time when the £193 million segment continues to be the primary driver of growth in the beer category[2].

The partnerships we’ve forged with Birmingham City FC and The Albion underpin a new era for the Sadler’s Peaky Blinder Lager brand. They provide a crucial platform from which to boost brand exposure amongst a core audience and profile our Craft Lager cans and bottles to a prime audience, building our brand affinity with football and sports for the long term.

Football fans are as passionate about their clubs as we are uncompromising on our brewing, so we’re positive that Peaky Blinder Craft Lager will soon become the match day drink of choice and give stockists the opportunity to capitalise on the football season ahead.

Sadler’s has a rich and long-standing legacy when it comes to both the on and off-trade in Birmingham and the Black Country, holding a genuine place in the areas’ brewing history. Peaky Blinder Craft Lager will attract new craft lager drinkers to the category via its new canned format; the football platform; and an authentic brand history to boot, at a time when appetite for craft lager is at an all-time high.

A crisp refreshing pale lager that balances the soft smooth bitterness of British hops with the uplifting pine and citrus notes of American Cascade.

Sadler’s Peaky Blinder Craft Lager and its wider Peaky Blinder beer portfolio will be supported by sports sponsorship activities and subsequent marketing activities throughout 2020, alongside outdoor advertising, POS, PR and digital campaign activity plus sampling across the convenience channel.