Home » What's on » Slice Of The Past Brought Back to Life! – Museum Transport Team Restore Rare 1950s Electric Bread Cart 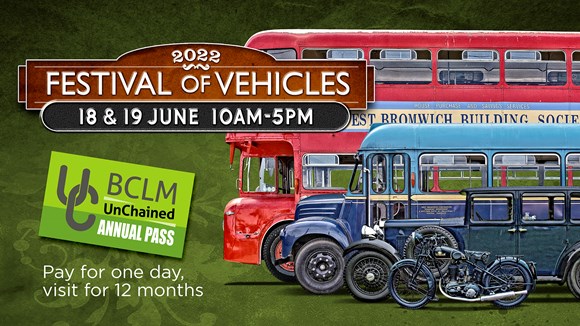 Black Country Living Museum’s transport team has successfully restored a Pedestrian-controlled Electric Vehicle back to its former glory for use around its 26-acre site during its Festival of Vehicles event.

Acquired by the museum in 2019, the “Graiseley” – an electric vehicle designed for use in deliveries – was made by Diamond Motors Ltd in Wolverhampton in 1950. Pedestrian controlled electric vehicles (PEVs) such as these were a common sight around towns and cities in the mid-20th century, being used by dairies, bakeries and grocers, as well as in factories, where the Graiseley provided a fumeless, noiseless and economical form of transport.

Believed to be one of only three such vehicles surviving, it was discovered in Sidcup, south London, where it had been used by the grocery shop of A.G Braddon during the 1950s and 60s. This particular vehicle provided a means of transporting bread and cakes from their off-site bakery to their shop on a high street located approximately ¼ mile away.

When inspected, it was found to be largely complete, although derelict and in need of a total restoration. Over the last two years, work has been quietly progressing on replacing rotten woodwork, overhauling mechanical components and rewiring life-expired electrics by a small team of talented volunteers. At the same time, refurbishment of the motor, reverse engineering of drive sprockets and structural bodywork was carried out by specialist contractors.

Now complete (along with a new set of batteries), the plan is to demonstrate the pedestrian-controlled truck around the Museum’s 26-acre site – bringing back to life this small but environmentally-friendly commercial vehicle. The Museum’s transport manager, Tim Shields, said “Small electric delivery vehicles such as the Graiseley cart were the unsung heroes of their day. After being found in such poor condition, it is great to see this rare historic survivor back on the road, demonstrating a green transport technology, now over 70 years old”.

Visitors will be able to witness the Graiseley in action, during the BCLM’s Festival of Vehicles event, taking place this Father’s Day weekend on 18 and 19 June. To learn more, visit bclm.com/festival-of-vehicles.