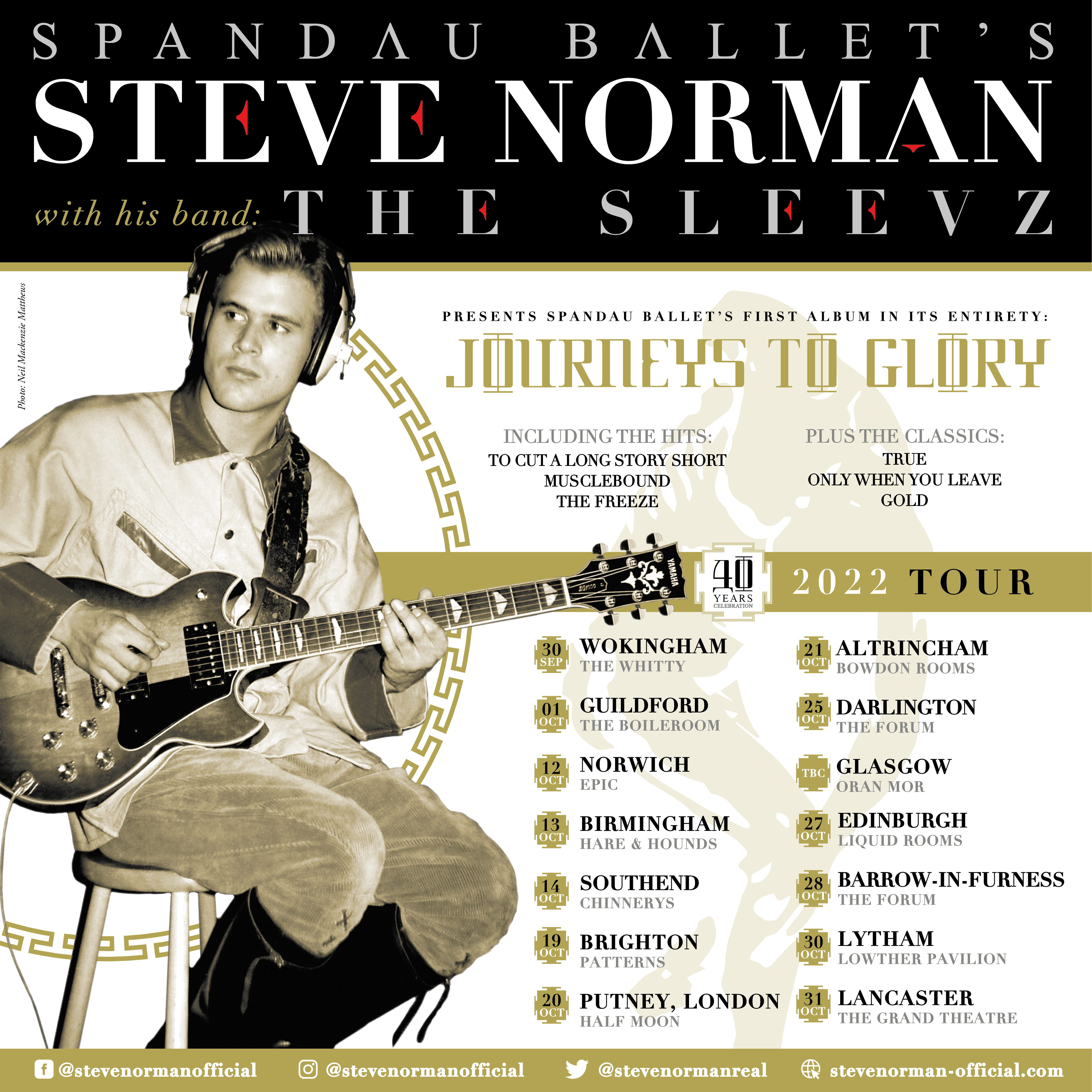 STEVE NORMAN, co-founder, saxophonist and multi-instrumentalist of the world-famous SPANDAU BALLET has announced the he will celebrate the bands 40th anniversary of their ground-breaking debut album, ‘Journeys To Glory’ with a full UK tour in 2022. The tour, originally slated for February has been rescheduled for the later part of the year, takes in 13 dates starting on 30th September at Wokingham The Whitty and culminating at Lancaster’s Grand Theatre on 31st October.

STEVE ON THE POSTPONEMENT:

“Due to the rising Omicron cases across the world and general uncertainty, I have come to the decision to postpone my upcoming “Journey’s to Glory’ 40th anniversary tour to September/October 2022. I am so very sorry for any inconvenience this may cause but yours and my band’s health is my first priority. I felt it would be irresponsible to go ahead with February as planned under the circumstances given.”

The charismatic performer, accompanied by his five-piece band ‘The Sleevz’ (that includes his son Jaco on bass), will perform the album in its entirety for the first time. ‘Journeys To Glory’ includes the band’s first hit single, ‘To Cut A Long Story Short’ and other singles, ‘Musclebound’ and ‘The Freeze’. The show will also feature later Spandau classics, including ‘True’, ‘Gold’ and ‘Only When You Leave’, and will showcase Steve’s prowess as a talented vocalist and guitar-player alongside his more well-known sax and percussion duties.

STEVE ON THE TOUR:

“As much as it pains me that my main band is not currently a working unit, I simply cannot let this important milestone slip by without further pomp and ceremony. Spandau will always have a special place in my heart, as will JK, Gary, Tone and Mart. This tour is me and The Sleevz rocking a fine line between our interpretation of the songs whilst keeping true to the integrity of the original versions. And ultimately and most importantly, the audiences’ ears. Luckily, I’m in both bands. I’ll make sure we don’t stray too far. I’m already fired up and thoroughly looking forward to performing this album in front of a live audience. For a few weeks in February 2022 myself and The Sleevz, flying the Spandau flag.”

STEVE ON THE IMPORTANCE OF ‘JOURNEY’S TO GLORY’

“Little did I know when I formed a band with my school chums back in 1976, that we would not only reach that Holy Grail of signing a record deal but that the resulting record would play a major part in representing and inspiring a whole new generation. Our fellow ‘movers and shakers’ of the Blitz crowd in 1979/1980 had sparked a new youth movement that was now erupting out of clubland and rippling out across the globe – The New Romantics. And my band with ‘Journeys To Glory’ were right there at the front. Our scene was creative, vibrant and powerful. We felt invincible. The collective Blitz kids’ wave was unstoppable, and Spandau had all the established bands looking over their shoulders wondering what the hell was coming through, and if they should be moving out of the way. Right there, was when our hopes and visions of the future finally materialised. Back when the saxophone, my future signature instrument, was just a twinkle in my quiff covered eye.”

Norman’s many career highlights including performing at the Live Aid concert at Wembley Stadium and being involved on Band Aid’s Christmas classic ‘Do They Know Its Christmas’. With Spandau Ballet, he has toured the world playing to huge audiences in stadia and arenas. In 2015 Spandau Ballet released a critically acclaimed documentary movie about the band’s story called “Soul Boys Of The Western World” that premiered at the SXSW Music Festival in Austin, Texas.

The dates are as follows: