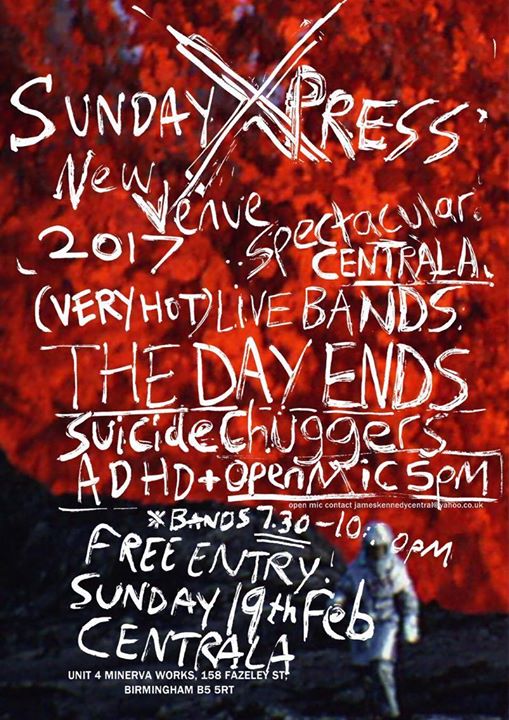 The nomadic Sunday Xpress event is proud to announce that it has found new accommodation at Centrala. Now in its 11th year, the Xpress is known for its loyal support of underground music and spoken word in the Midlands, and has also been praised for its diverse programming of its booked acts, from traditional folk to power electronics to some of the best indie bands that Birmingham has to offer.

Never afraid to challenge and entertain at the same time, a full day at the Xpress basically covers two (or more) gigs in one. An open mic/showcase event is what the event built its name on, and starts proceedings at 5 until half 7, and then after a brief break (or a film, or some interpretive dance…) we have the bands.

This month’s headliners are Smethwick’s finest, The Day Ends. Formed from the ashes of acclaimed arts collective Miss Halliwell, The Day Ends are fronted by Miles Perhower, a great supporter of the Xpress in recent years. Think jagged Beefheart jazz riffs with apocalyptic state-of-the-nation nihilism and you’re nearly there. Support on the night comes from new Wolverhampton blues distortion collective Suicide Chuggers, and the indie pop thrills of ADHD, grafted from many years of excellent song-crafting and testing on the 50 route.

Your compere as always is the Yardley Bard, Big Brendan Higgins, the unofficial poet laureate of Birmingham since 2000 when he’s not out “shopping shopping shopping.” We have Spotify and ITunes playlists stuck through the PA too (!) and a range of projections via YouTube to rest your eyes on from Jim Bowen to Jan Svankmajer. And it’s all for nothing. If you’ve not been down to the Sunday Xpress before, make it this one. And then all of the others.