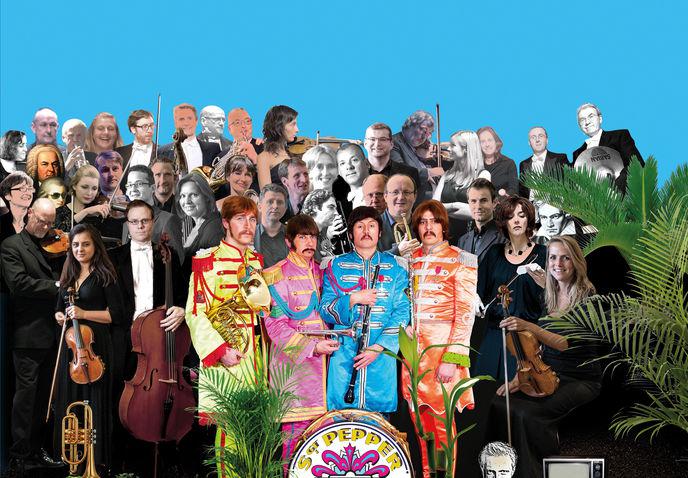 Symphony Hall has announced a very special concert to mark the 50th Anniversary of arguably the most influential album of all time, Sgt. Pepper’s Lonely Hearts Club Band, on 6 June 2017.

As Sgt. Pepper’s Lonely Hearts Club Band reaches its half century, the award-winning Royal Liverpool Philharmonic Orchestra and the nation’s premier Beatle group The Bootleg Beatles team up to perform this iconic album live, fifty years to the day of its original release.

The production will feature the most successful and longest running Beatles tribute band, the Bootleg Beatles, with the 70 piece Royal Liverpool Philharmonic Orchestra performing the much-loved album in its entirety. This will accompany many other songs from the Beatles’ ‘flower power’ era including ‘Strawberry Fields’, ‘Penny Lane’ and the anthemic ‘All You Need is Love’.

With music arranged by acclaimed composer Nigel Osborne and hosted by the legendary Liverpool poet Roger McGough, this concert will be a once in a lifetime opportunity to experience what Rolling Stone magazine proclaimed to be ‘the number one greatest album of all time’, complete with a full blown orchestral backing.

Describing the show as being like ‘Sgt Pepper in HD’, Osborne’s works have been features in most major international festivals and performed by many leading international orchestras and ensembles.

Commenting on the show, Chris Baldock, Head of Commercial Programming at THSH, said:

We are delighted to announce what we know will be a truly memorable performance to celebrate fifty years since the release of such an influential album. The combination of the Bootleg Beatles and the Royal Liverpool Philharmonic Orchestra is going to be a unique occasion. This is an opportunity not to be missed!

‘It Was Fifty Years Ago Today’ will offer an unprecedented look back on a master work whose influence and potency is undiminished five decades on.

This concert will take place on June 6 2017 at Symphony Hall, Birmingham.