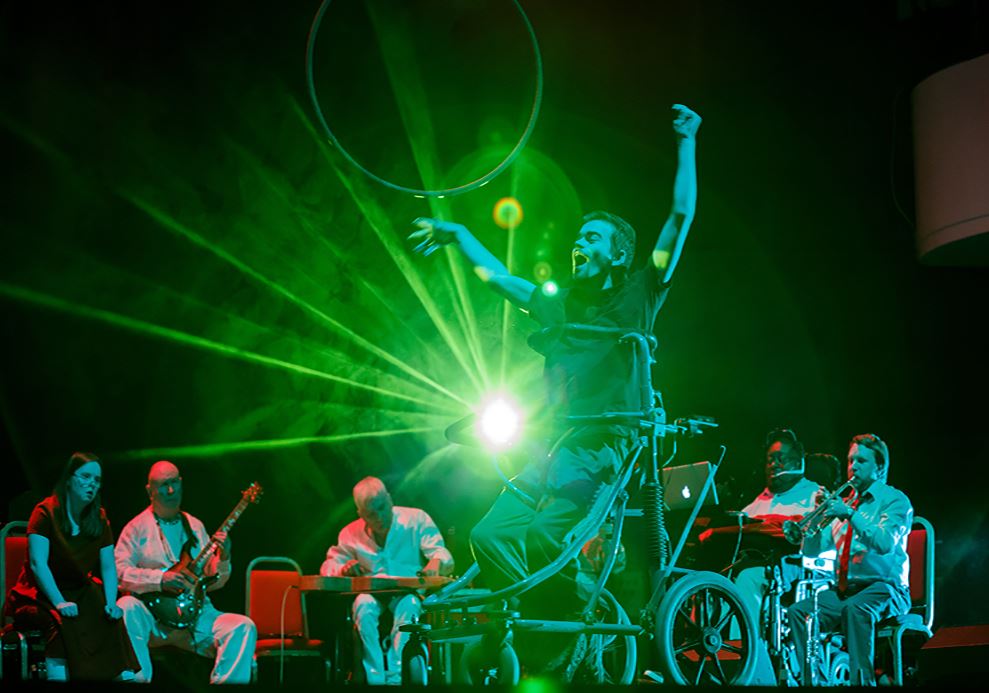 The British Paraorchestra is the world’s first large-scale professional ensemble for disabled musicians. It made its memorable world debut in front of an international TV audience of millions at the closing ceremony of the London 2012 Paralympic Games, alongside rock superstars Coldplay. The Paraorchestra is a boundary breaking outfit that is unlike any orchestra you’ve seen or heard. Central to its mission is to perform phenomenal music that captivates any audience, pushing classical music forward and proving beyond a doubt that disability is no barrier to talent.

The British Paraorchestra is shifting perceptions of disability by creating a visible platform for gifted disabled musicians to perform and excel at the highest level in the mainstream of live performance. In June 2016, the Paraorchestra formed part of the first classical orchestra to headline a stage at the Glastonbury Festival, as Charles Hazlewood conducted a mesmerising take on Philip Glass’s Heroes Symphony, the event’s major celebration of the late David Bowie.

The stage at Birmingham’s Symphony Hall will host another first on 18 February 2017, when members of the City of Birmingham Symphony Orchestra will perform alongside The British Paraorchestra. The evening will see the two world-class ensembles working together in a truly collaborative spirit, breaking down preconceived barriers and dispensing with the separation between disabled and non-disabled professional musicians.

Town Hall Symphony Hall is incredibly proud to be welcoming The British Paraorchestra for their Birmingham debut under the baton of their inspirational founder and conductor Charles Hazlewood. This orchestra, with their unwavering and pioneering commitment to recognising and showcasing disabled musicians with extraordinary abilities, should be on every stage around the world.

Including them in Symphony Hall as part of Birmingham Classical, and especially pairing them with members of our resident orchestra, the CBSO, unquestionably makes sense and continues to place ability, excellence and profound music making at our season’s heart.

Classical music in Birmingham is positively evolving. Birmingham Classical fulfils our joint aims of making classical music more accessible to a broader more diverse audience, whilst maintaining Birmingham’s position as a world-leading destination for bringing to the city some of the world’s most sought after performers and top orchestras.

We would encourage all audiences, be they seasoned concert goers or first time attenders, to not miss this opportunity to hear these extraordinary musicians perform. We can’t wait to have them here.

We are immensely excited to play a fulsome part in Birmingham Symphony Hall’s upcoming programme; Including The British Paraorchestra in an internationally-recognised season of classical music at a premium concert hall, sends out a clear message: having a disability in no way precludes you from making world class music.

If anyone thought that disability and excellence are two words that cannot be put together, then here’s proof to think again. The British Paraorchestra will be joined for part of the concert by the CBSO, creating a vision of integration; a snapshot of a hoped-for near-future where it is no surprise to see a healthy number of disabled musicians sharing the stage with non-disabled ones.

The programme on 18 February 2017 features repertoire spanning four centuries, and includes Corelli’s La Folia and Lloyd Coleman’s Towards Harmony. Tickets are on sale now at thsh.co.uk or cbso.co.uk and are priced between £12.50 and £31 (including per ticket commission).