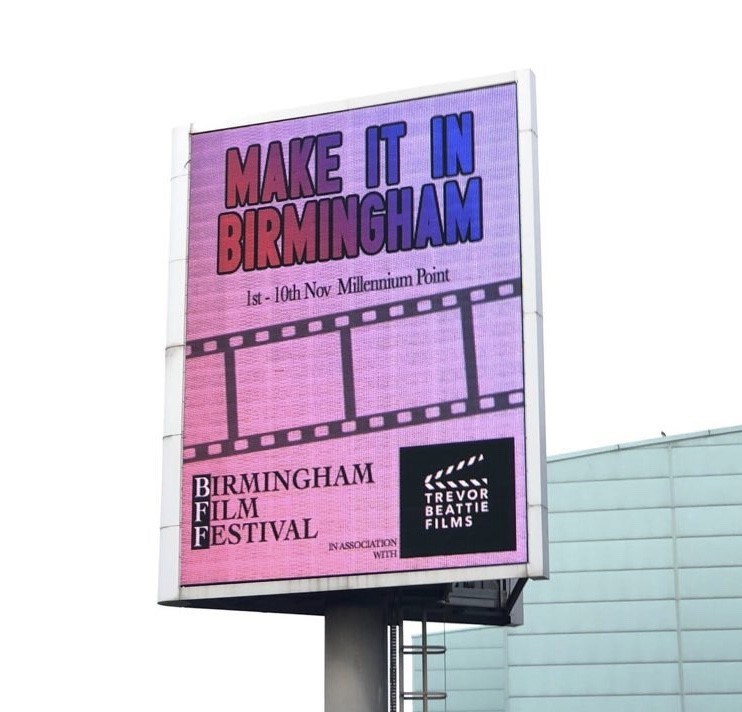 The fourth annual Birmingham Film Festival, an international festival of screenings, events and awards for talented filmmakers from around the world, returns to the city from 1st – 10th November.

The international celebration of film craft is a platform for new filmmakers, helping them reach a wider audience and nurture their careers to the next level. The festival’s screenings and seminars are all free to attend, making the innovative festival accessible to all and allowing the filmmakers showcase their work to a huge audience.

Birmingham Film Festival, which takes place over the course of ten days at Millennium Point, featuring an array of shorts, features, documentaries, and music videos, aims to put Birmingham on the international map and will add to the rising popularity of the UK’s second city.

The festival’s home, Birmingham, has recently become a popular location choice for Hollywood filmmakers, most notably including Steven Speilberg’s Ready Player One and Kingsman: The Golden Circle.

Trevor Beattie Films is the 2019 headline sponsor for the upcoming event. Trevor Beattie, originally from Birmingham, is considered one of the leading figures in advertising in Britain and has been responsible for a number of high-profile advertising campaigns. He has since moved into the film industry, producing the BAFTA award-winning film Moon, directed by Duncan Jones in 2008.

It has not escaped my attention that Birmingham has a Hollywood district, and I’m sorely tempted to base the Birmingham branch of my film company in B47. I just think “TREVOR BEATTIE FILMS, HOLLYWOOD, B47” has a ring to it.

I’m really looking forward to the festival week and seeing some of the extraordinary film making talent on display. I have a message for Birmingham from DUNCAN JONES (of that other Hollywood fame). Duncan promises that he will visit Birmingham when he next returns to the UK and create a little something for next year’s festival. Birmingham has ARRIVED in film! Birmingham Film Festival will ensure that news is shouted from the rooftops.” says Trevor Beattie.

Steven Knight, the Brummie creator of Peaky Blinders, who is planning on building a £100M state-of-the-art film and TV studio in the city, is the festival’s patron.

Kevin McDonagh, President of Birmingham Film Festival said: “We are really excited for this year’s festival. Our aim has always been to grow the event and reach larger audiences for the amazing work that we get to show and we’ve achieved that this year.

Adding more seminars and workshops was also key as it not only brings more of the industry into the city but supports local talent and helps them to grow their own careers. Raising the profile of the festival also leads into that goal, bringing more focus onto the city and its talent.

If we can create an exciting and respected platform for the films and filmmakers, then we hopefully we are contributing in a positive way to future of the regions industry.

To be honest though, our growth and success is in no small part due to the amazing talent that generously allows us to showcase their efforts. Without the film makers, we are nothing.”

The festival will conclude with a fabulous Gala Awards Ceremony on 9th November at Macdonald Burlington Hotel, during which the Birmingham Film Festival Awards will be handed out to the winners of each of each category. Awards will be given out to everything from Best Feature Film to Best Young Actor, Best Local Film and Best Special Effects.

One of Birmingham’s most famous sons, Nick Rhodesof Duran Duran, has also been announced as a judge for the music video category.

I was thrilled to be at the Birmingham Film Festival last year and wish everybody involved with this year’s event the best. Though I won’t be there on the night, I will be judging the music video category. says Nick Rhodes, Duran Duran.

Celebrities and special guests will be out in force on Friday 1st November at the Millennium Point to kick-start the festival at the glamorous VIP Launch Party.

The film festival invites talented and independent film makers from all over the globe to participate. To learn more about Birmingham Film Festival visit www.birminghamfilmfestival.com

“If you’re going to make it, make it in Birmingham” ~ Steven Knight.