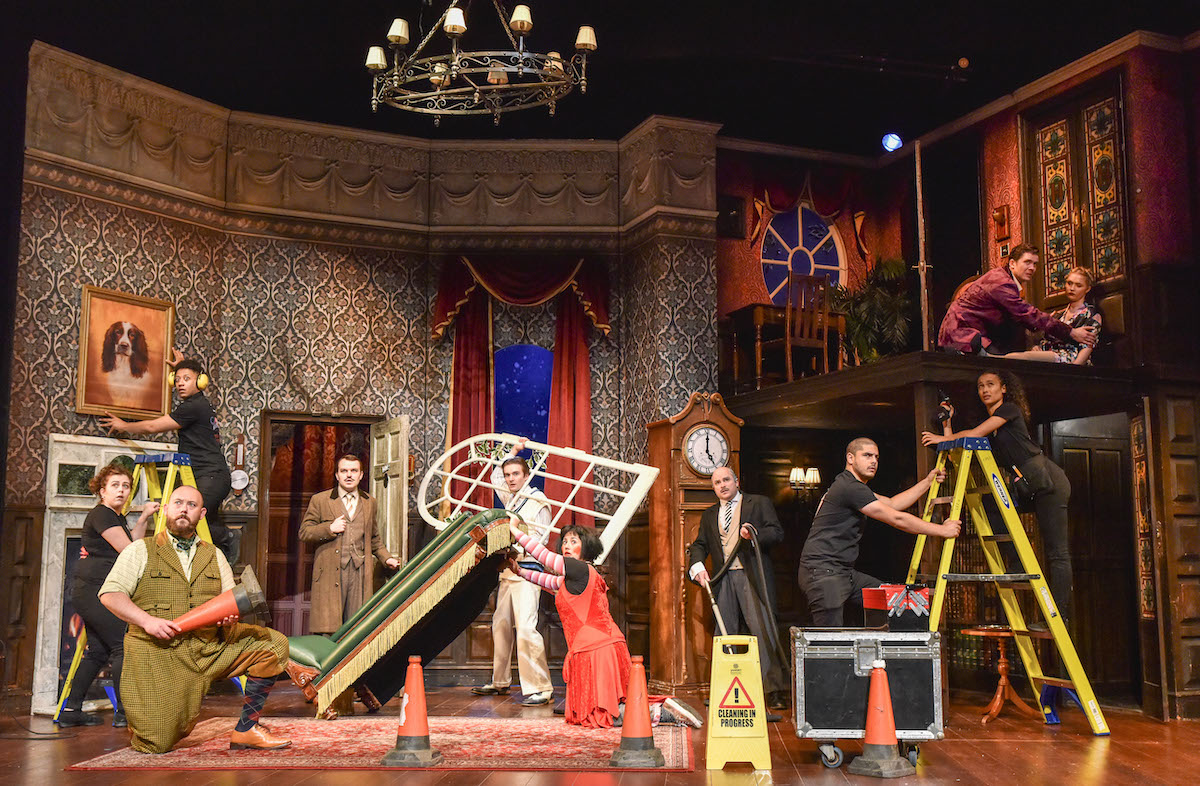 The show’s success is a testament to the hard work and determination of a group of drama school graduates who became friends, set up a company under the name ‘Mischief’ and created an extraordinary body of work. The Play That Goes Wrong shows no signs of slowing down since its first performance at a London fringe venue with only four paying customers. Since then, it has played to an audience of over two million and now has productions in over 30 countries.

The play features the (fictional) Cornley Drama Society who are putting on a 1920s murder mystery, but as the title suggests, everything that can go wrong… does! As the accident prone thesps battle against all the odds to reach their final curtain call, hilarious results ensue!

Mischief’s other West End successes include Magic Goes Wrong, Groan Ups, Peter Pan Goes Wrong, Mischief Movie Night and A Comedy About A Bank Robbery. Magic Goes Wrong and Groan Ups are also currently touring the UK. The second series of their award-winning television comedy, The Goes Wrong Show, launched on BBC One in September 2021. The five-part series was broadcast weekly and is currently available on BBC iPlayer. The company is owned and controlled by its original members and is led by a creative group and its directors Henry Lewis and Jonathan Sayer.

The Play That Goes Wrong is co-written by Mischief company members Henry Lewis, Jonathan Sayer and Henry Shields. The tour is directed by Sean Turner, originally directed by Mark Bell,with set designs by Nigel Hook, costumes by Roberto Surace, lighting by Ric Mountjoy and sound design by Andy Johnson. Casting for the 2022 UK tour is yet to be announced. The Play That Goes Wrong is produced by Kenny Wax Ltd and Stage Presence Ltd.

Mischief Theatre Ltd. was founded in 2008 by a group of acting graduates of LAMDA and began as an improvised comedy group. Mischief performs across the UK and internationally with original scripted and improvised work and also has a programme of workshops. The company is owned and controlled by its original members and is led by a creative group and its directors Henry Lewis and Jonathan Sayer.

Pre pandemic, Mischief had multiple productions playing in New York and London. The Play That Goes Wrong (Duchess Theatre, which re-opened 18 June 2021), The Comedy About A Bank Robbery (which played at the Criterion Theatre for four years) and following a record-breaking two-year run on Broadway it was represented Off Broadway by The Play That Goes Wrong (New World Stages since 2019, re-opened October 2021, co-produced with Kevin McCollum and JJ Abrams). In September 2019 the company started a West End residency at the Vaudeville Theatre with Groan Ups followed by Magic Goes Wrong. Magic Goes Wrong returned to the West End for a strictly limited run at The Apollo Theatre from October 2021. Other Mischief productions, including Peter Pan Goes Wrong, regularly tour the UK, USA and worldwide.

Mischief was first seen on television in the Royal Variety Performance of 2015 and subsequently in two BBC One Christmas specials, Peter Pan Goes Wrong (2016) and A Christmas Carol Goes Wrong(2017). In 2018 Mischief Worldwide Ltd. and the Anthology Group formed Mischief Screen Ltd., an independent TV production company headed by CEO Hilary Strong. Their Royal Television Society award-winning BBC One series The Goes Wrong Show aired in December 2019 with a Christmas special, further episodes in early 2020, and a hit Nativity special last Christmas. The second series aired in September 2021 on BBC One and iPlayer where the gang tackled a Downton-esque family saga and a US-style prison break drama, with predictably disastrous results.

All the companies develop, create and perform under the single name of Mischief. Mischief is developing new works of comedy for theatre, TV, film and other media.

www.mischiefcomedy.com Mischief®, Mischief Theatre®, The Play That Goes Wrong® and ® are trademarks and registered trademarks of Mischief Worldwide Ltd.