The Rise in Homeless People & Begging in Birmingham 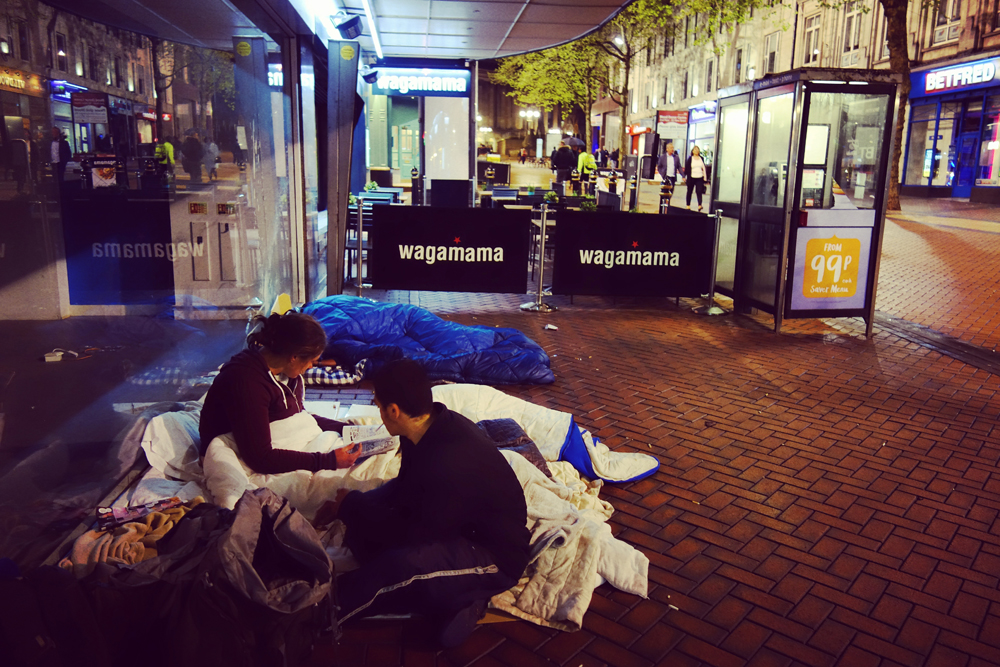 Back in December of 2014, I became quite overwhelmed with the amount of people begging on the streets of Birmingham. This eventuated in me writing an article about Helping The Homeless in Brum which you can read here.

Then one winters day, I came across someone in Birmingham who called my name, I turned around to discover it was a guy I knew from my high school in Ross on Wye. He was disheveled, gaunt with open wounds on his face and was asking for a quid, which I gave him. He explained he was now living on the street and was recovering from a serious heroin addiction. But he still drank heavily. It was upsetting to see. Having seen really good, kind people’s lives completely stolen by heroin and alcohol it made me realise anyone could end up in this predicament.

Time moved on, and I didn’t give it much thought, I’d sometimes speak to my mother about the plight of the homeless, as she would buy the Big Issue religiously. After mom passed away, I kind of looked out that little bit more, and gave it more thought than I would normally, in her memory perhaps, as someone who didn’t have a great deal to give herself but always had time for others.

Fast-forward to 2017, the last 12 months have been horrendous on the streets of Birmingham. With record amounts of rough sleepers and beggars. Check out a Guardian article here covering this story. The number of rough sleepers in England rises for sixth successive year, and you have to ask the question why?

What has shocked me more than anything is the amount of women now on the street, who are in obvious desperate need of help, it is alarming.

For The People I Have Met 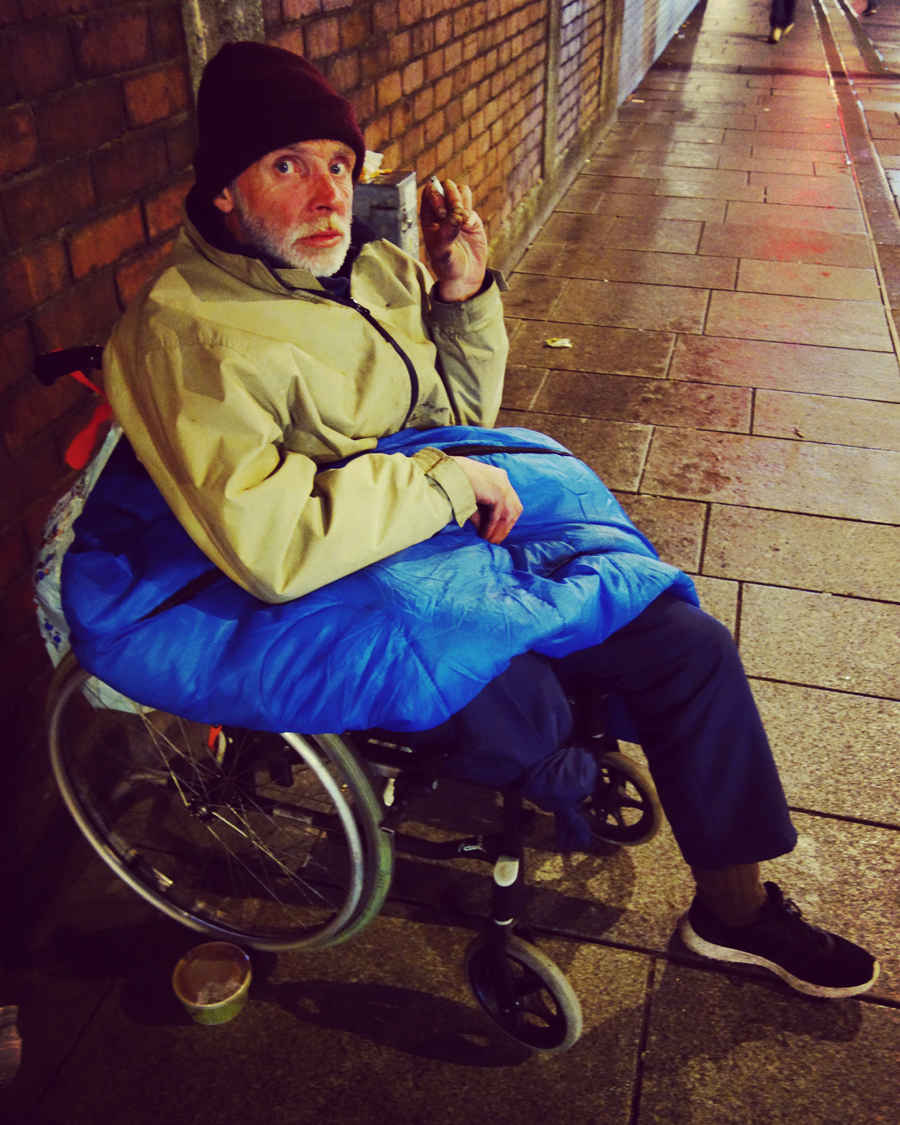 I’m writing this for the people I have met and spoken to, in their memory, if it can help in any way then great, if not, it’s off my chest and I’ll continue to listen and chat to those who sometimes just need to feel like they are human, not something to be sneered at.

The first person who caught my attention, was a middle aged woman, sat cross legged near New Street in the pouring rain, not even asking for money any more such was her despair. Head down, looking at people’s feet as they trudged past. I bought her a book ‘A Street Cat Named Bob’ and a bag of food.

She explained she loved reading and welled up. I just wanted her to know someone cared.

The next person that really had an effect on me, I met on another cold winters night. As I walked up Hurst Street, I came across what I assumed was a young man,. He was huddled in a grotty doorway, head down, woolly hat and shaking, not begging, just suffering. I couldn’t walk past without doing something, so I bought some fries, and a can of coke. As I handed it to this person, they raised their head only for me to realise it was a young woman, with a terribly bruised and battered face, few teeth missing. I asked how this happened, she said she had tripped – likely story.

We spoke as the party goers walked past from a Hippodrome event, almost looking down at me thinking I was also homeless, but I didn’t care. Her story, and I do not doubt this, because she had no reason to lie, and was very calm and matter of fact, was one of a traumatic childhood. She then clung to an abusive relationship, and was introduced to drug and alcohol addiction, and ultimately homelessness, as her family could not cope with who she had become.

Her great sadness came through, she praised the local wardens for walking past, and allowing her to stay in a lit area. She was off the heroin but admitted to still using alcohol to get her through. I’m not ashamed to say, It brought me to tears, to hear this, and she ended up comforting me, saying it was OK – well no it wasn’t OK actually.

Behind these statistics are thousands of desperate people, sleeping in doorways, bin shelters, stations and parks – anywhere they can find to stay safe and escape the elements. Cuts to housing benefit and a woeful lack of affordable housing are just some of the reasons rough sleeping continues to rise – Matt Downie, head of policy at Crisis, a UK homeless charity (article here).

I’ve stepped in to break up a man trying to strangle a rough sleeper woman, while others just stood by and watched, in fear of her life. He was trying to steal her medical card. On another occasion, a young homeless woman who I often noticed begging, was actually inside Grand Central being pulled by the hands in two different directions by men. Again I stepped in asking what was going on, and they left the scene. She explained she was trying to decide which man’s offer of a bed for the night she would take, who would keep her safe the most – having that as your choice just to get off the street for one night must have been unimaginable for her.

The amount of unconscious people you see in and around the city centre is deeply distressing and it has become far more apparent in recent years. I called the Street Link number which I was advised to use, by someone from Birmingham City Council, when I came across someone unconscious behind some gates in Moor Street last weekend. She was on her back, out of it with homeless man trying to shove pieces of paper in her mouth? I left my name and number and explained this person needed help urgently, sadly no one called back – great!

Just last night, myself and a friend walking towards John Bright Street, a man in a wheel chair with one leg, whom I had spoken to the night before, and who said someone from the NHS was visiting him and keeping him alive, was comforting a young woman. She was slumped at his wheel, with her head hidden from passers by, sobbing her heart out in sheer desperation. He was holding her hand stoically.

Perhaps he was her hero for that moment? Sadly as we walked back to catch the train later in the evening, the same young woman, was lay unconscious, in a door way of the old Futurist cinema, people just walking past. What has this country come to? Anyone who says they choose to live that life should try and spend a day in their shoes, trying to escape addiction, memories of abuse, continued abuse, depression and despair. 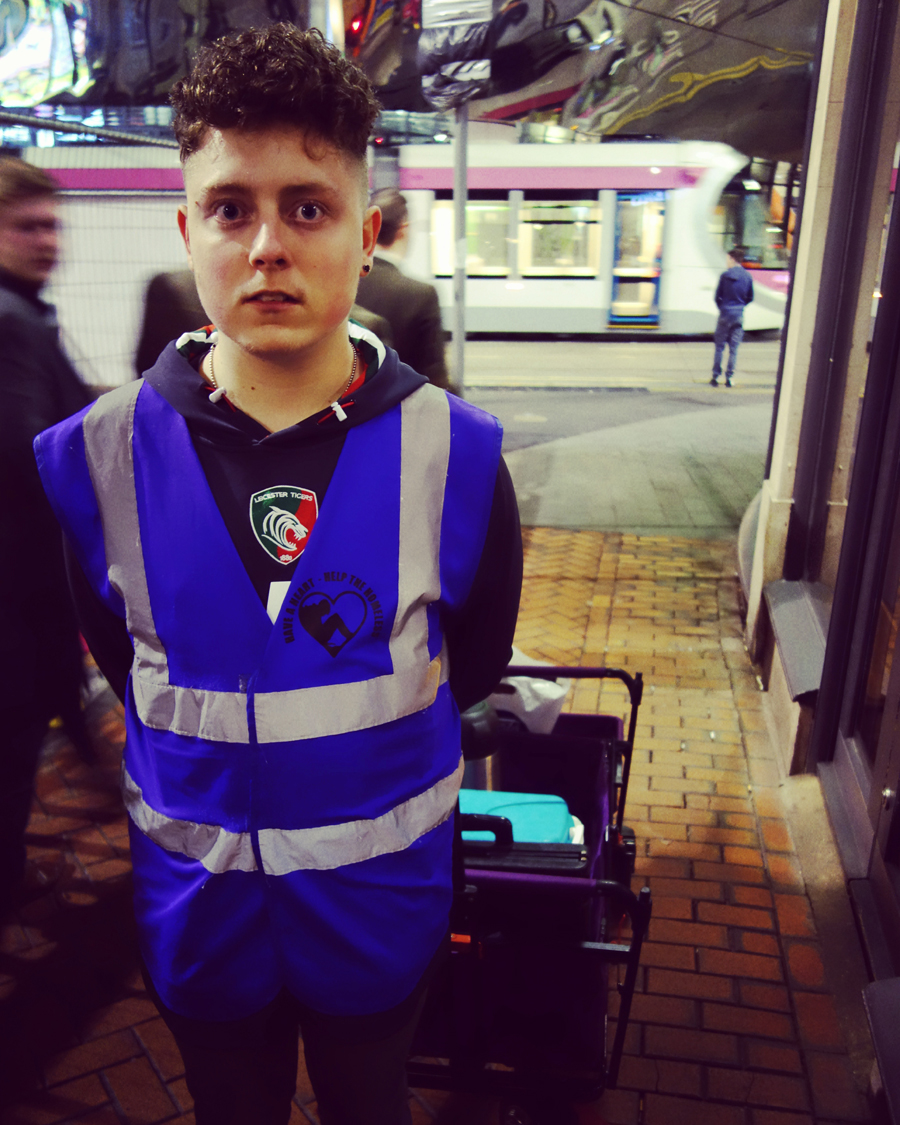 I spoke to a police officer recently who said they will try and wake someone who is unconscious, if they do not wake they call an ambulance. They suggest I call 111, the non emergency number if I come across someone unconscious again. I explained that I had actually asked a paramedic to help an African Caribbean man who was in great anguish and trauma, wrapped around a lap post near Hurst Street, he was screaming out in pain and the police hadn’t attended.

The paramedics who were parked up near-by, said they would attend when they could, and really, did not seem interested. They must see this every day, and must be horrible to have to deal with, but we are all human beings who need care and help, it could be you or I one day.

My last story is of an old man, who was literally at death’s door. This gentleman was shaking uncontrollably, wrapped in blankets by the Bullring, so gaunt he looked like a starved concentration camp victim. His teeth yellow and fused together, he could hardly speak, mouth sticking together and his eyes wide open looking at me as he whispered for water.

I bought him a bottle of water and a sandwich and sat with him for a while to ensure he didn’t eat it too quickly. I then spent two hours trying to get through to Midland Heart, with a number just ringing out, eventually after persistence someone answered and said there was no one who could attend, but he would try and find someone to help, but wouldn’t be anytime soon. The funding and resources of these organisations and charities must be so stretched, even the police cannot cope as you rarely see them on foot in the city centre at night these days.

The number of people sleeping on our streets continues to rise at an appalling rate – Matt Downie, head of policy at Crisis, a UK homeless charity (article here).

My point of writing this, is to highlight that something needs to be done urgently, at national level. To reverse the cuts to mental health services, and homeless charities, the police, and all others who are trained to make a difference to these lost souls, and get these human beings the help they deserve. Weather it be education, help with addiction, a safe bed, or someone on the street patrolling day and night to protect them and get them back into a safe place.

Yes, there are many amazing people who donate their own time, to operate soup kitchens, and beds for the night, as I covered in my article here but this is not enough. So much should not fall upon volunteers, when huge corporations such as Google and Amazon avoid so much tax. We need a solid plan to help reduce the rough sleeper problem, and also to discourage begging.

This is not to say many are not homeless, but anyone who is begging, regardless of circumstances is in need of help,they are doing so out of addiction and desperation. My sympathies also go to the shopkeepers, who have to endure this, and clean up after the mess left behind, these hard working people are also being let down by a failing government policy on the homeless. I guess the reality is, these people on the street have no value in the eyes of the policy makers, thus they are no longer considered worth caring for.

This is not Victorian Britain, we need an action plan and I will be sending this to MPs and the Council in the hope that by adding my voice to the many others, we can try and help these lost souls, who are literally dying, or being abused on our streets, some times in front of our own eyes (another story here on Aljazeera).

This is signed by myself and by the many friends and family who feel the same frustration and anguish as myself. Something needs to change.

Photos were taken with permission Saturday 6th May 2017.