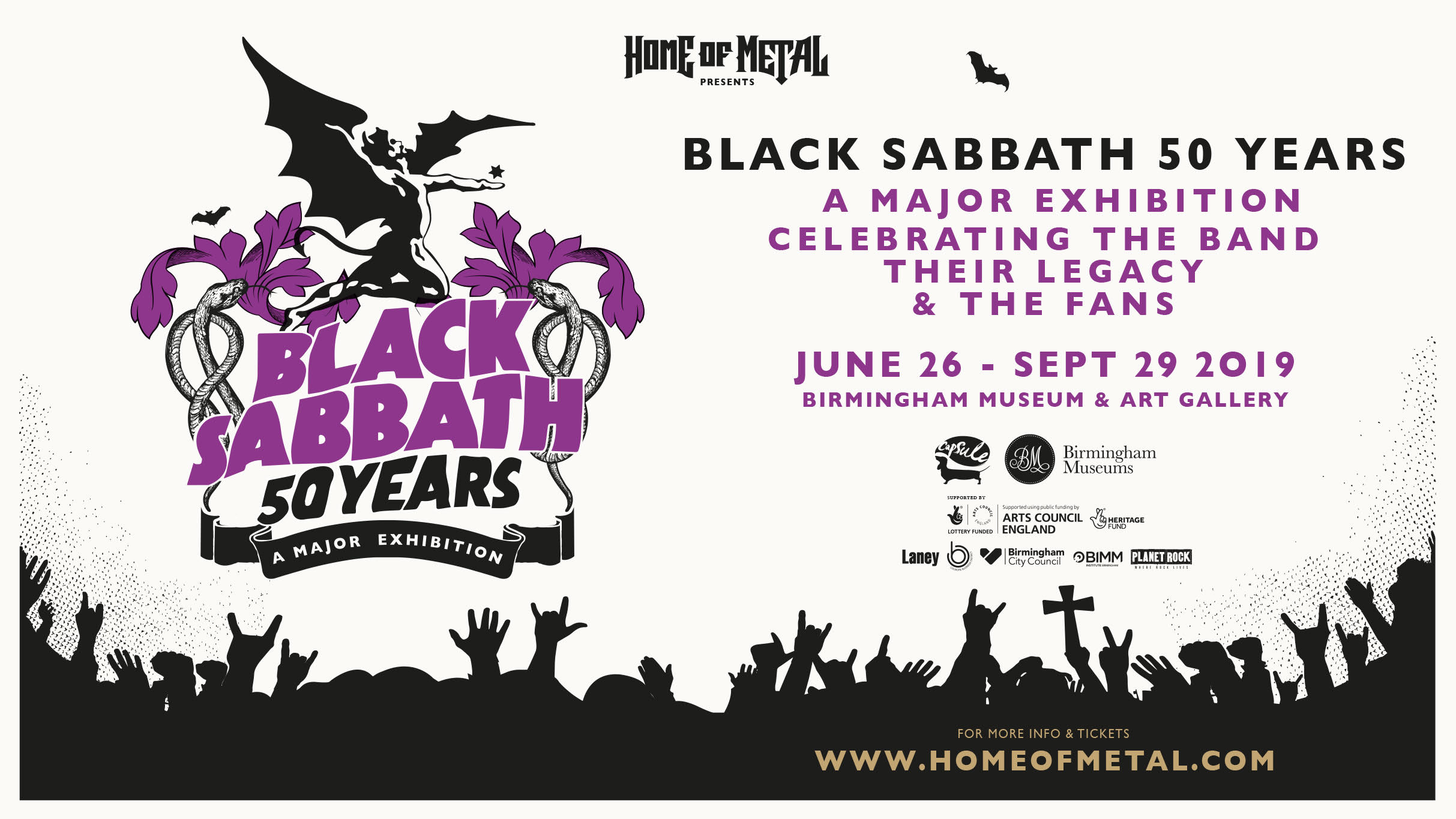 It’s an honour to be a part of the Home of Metal. I am just a guy from Birmingham who’s been blessed to have had such dedicated fans throughout my career. Like I’ve always said ‘I am nothing without them’. – Ozzy Osbourne

Tickets will be on general release for this year’s blockbuster Heavy Metal exhibition, Home of Metal: Black Sabbath – 50 Years, from Thursday 18th April. The exhibition opens to the public on 26 June through to 29 September at Birmingham Museum & Art Gallery. For details go to www.homeofmetal.com

From the humble beginnings of 1960s Aston, Birmingham, Ozzy Osbourne, Tony Iommi, Geezer Butler and Bill Ward created Black Sabbath, in turn forging a new sound, a new aesthetic, and a new musical culture – Heavy Metal. With the full support of the original founders of Black Sabbath, the exhibition will detail the history of this iconic band, and their links to Birmingham, as the early pioneers of Heavy Metal. The show will celebrate their significant contribution to British music heritage and their unique relationship to their fans.

Iconic artefacts and personal items such as photographs, fans’ gifts, stage costumes and jewellery, plus more, will be on loan from the band members themselves. In addition, demonstrating the extraordinary scale and diversity of their global fan base, the show will include Black Sabbath memorabilia stretching back to the 70s, ranging from gig tickets and mixtapes, to motorbikes and battle jackets.

The exhibition will also showcase Black Sabbath’s Birmingham roots with photographs, posters, tickets and programmes from local venues that were instrumental in the band’s early success.

Also, a collection of 3,000+ commissioned portraits of Metal fans from countries as far afield as the USA, Botswana, Eygpt, Indonesia and Japan will throw light on this huge global community, one which Spotify* recently identified as the most loyal across all music genres.

Home of Metal is conceived and produced by Capsule, under the leadership of its founder and artistic director, Lisa Meyer, and is presented in partnership with Birmingham Museums Trust. In collaboration with Capsule, Morag Myerscough and Luke Morgan, one of the UK’s most acclaimed designer duos, will designHome of Metal: Black Sabbath – 50 Years for the Gas Hall within Birmingham Museum & Art Gallery, the largest exhibition space in a museum or gallery outside of London.

The exhibition is at the centerpiece of six shows being staged this summer by Home of Metal, each devoted to the music that was born in and around Birmingham. Music that turned up the volume, down-tuned the guitars, and introduced a whole new meaning to the word ‘heavy’ that has reached into all corners of culture.

Further information is available on the full Home of Metal summer exhibition programme, which includes:

Alan Kane: 4 Bed Detached Home of Metal at The New Art Gallery Walsall, 22 June to 1 September, will see Alan Kane bringing together personal collections from metal fans, plus works from leading UK artists, in an ambitiously collaborative exhibition that will be set across the extensive Floor 3 Galleries.

All This Mayhem at MAC (Midlands Art Centre), 22 June to 8 September, presents US artist Ben Venom using traditional quilting and Heavy Metal aesthetics to create textile based pieces which contrasts the counterculture components of gangs, punk/metal music and the occult with the comforts of domesticity.

Hand of Doom at MAC (Midlands Art Centre), from 8 June to 1 September, the exhibition features a collection of portraits of Black Sabbath fans wearing the ubiquitous battle jacket. The jackets are embellished, handmade and embroidered by the fans themselves, and worn to tell the story of their fandom and gig-attending history.

Monster Chetwynd: Hell Mouth 3 at Eastside Projects, 18 May to 27 July. Chetwynd’s fascination with Penelope Spheeri’s three-part film series The Decline of Western Civilisation (1981 to 1998), featuring many of the ‘most influential and innovative musicians and groups of all time’, has informed many of Chetwynd’s works over the past decade and will take centre stage in this large-scale sculptural and performative spectacle set within this industrial space in the heart of Birmingham.

Przemek Branas at Centrala, 22 June to 11 August. Branas, an award-winning and acclaimed Polish artists, will present two exhibitions and a programme of talks and events in response to the theme: Home of Metal. An archival and research based exhibition will feature materials, such as letters, cassette tapes and zines, collected by Polish fans and received by them from the West, at a time the Polish music scene was under state control.