Tolkien to The Western Front 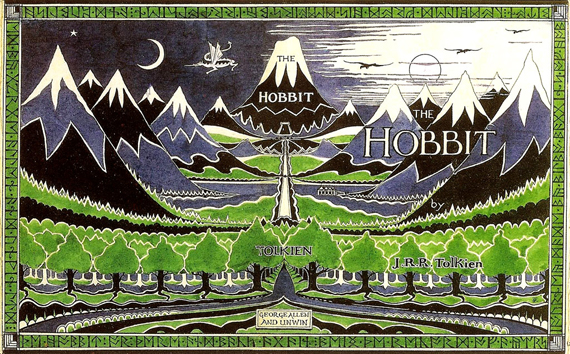 J. R. R. Tolkien is best known for his fantasy trilogy ‘The Lord of the Rings’. The books became immensely popular in the 1960s and have remained so ever since, ranking as one of the most popular works of fiction of the 20th century, judged by both sales and reader surveys. Tolkien was a literary genius and wrote other books such as the Hobbit and even invented his own ‘Elvish’ language.

Whilst Tolkien lived for some time in other parts of the UK, most notably Oxford where he studied and later became a professor, he considered the West Midlands dialect of Middle English to be his own “native language”, as he wrote to friend and local poet ‘W. H. Auden’ in 1955:

I am a West-midlander by blood (and took to early west-midland Middle English as a known tongue as soon as I set eyes on it).

Both of Tolkien’s parents Arthur and Mabel were originally from Birmingham but had relocated to South Africa through Arthur’s work in the bank. Mabel took both her sons on a long vacation back to England from South Africa, during this time Arthur Tolkien became sick with rheumatic fever and died before he could join them.

With no income, Mabel and her two sons remained in Kings Heath. Mabel later also became terminally ill with diabetes and prior to her death, she assigned the guardianship of her sons to her close friend, Fr. Francis Xavier Morgan of the Birmingham Oratory, with the intention of bringing them up as good Catholics. Tolkien then moved to Edgbaston and later attended the magnificent (now demolished) King Edward’s School on New Street, where he was a student from 1900 to 1911.

From Birmingham “With Love” 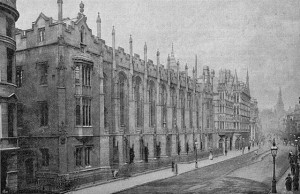 At the age of 16, Tolkien met Edith Mary Bratt (from Gloucestershire), when he and his brother Hilary moved into the boarding house in which she lived in the city.

Edith and Ronald often visited Birmingham teashops, one being a favourite with a balcony overlooking the street. The young couple would throw sugar-lumps into the hats of passers-by, moving to the next table when the sugar bowl was empty. Both Tolkien and Bratt were orphans in need of affection, and they found that they could give it to each other. During the summer of 1909, they decided that they were in love.

His guardian, Father Francis Morgan, viewed Edith as a distraction from Tolkien’s education and concerned that he was becoming too involved with a Protestant girl, prohibited him from meeting, talking to, or even corresponding with Bratt until he was 21. It is thought that Tolkien obeyed this prohibition, apart from one occasion where Father Morgan threatened to cut short his University career.

On the evening of his twenty-first birthday, Tolkien wrote to Edith a declaration of his love and asked her to marry him. Edith replied saying that she had already agreed to marry another man, but that she had done so because she had believed Tolkien had forgotten her. The two met up and beneath a railway viaduct renewed their love; Edith returned her engagement ring and announced that she was marrying Tolkien instead. Edith and Ronald were formally engaged in Birmingham, in January 1913, and married at Warwick.

Tolkien To The Western Front 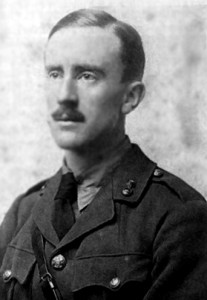 Many young English men did not relish the thought of going to fight from the trenches during the outbreak of World War I. It would have been viewed by some as an almost certain death and. J.R.R. Tolkien was no exception to those keen not to die in a foreign land.

Tolkien was studying at Oxford when England declared war on Germany in 1914. He managed to join the Officer’s Training Corps. This meant he could defer enlistment until his degree was completed. Tolkien’s relatives were shocked when he failed to immediately volunteer for the British Army.

The city of Birmingham alone raised nearly 8000 men of all classes for the Warwickshire Regiment as soon as war broke out (more info).

In a 1941 letter to his son Michael, Tolkien recalled:

In those days chaps joined up, or were scorned publicly. It was a nasty cleft to be in for a young man with too much imagination and little physical courage.

During training, Tolkien spent 11 months on nearby Cannock Chase. He was commissioned as a second lieutenant in the 13th Lancashire Fusiliers, and later appointed battalion signaling officer. By the time Tolkien reached the combat lines in 1916, many thousands of British soldiers had already lost their lives in horrific trench warfare, but more were to follow as he would find out.

Departure from England on a troop transporter inspired Tolkien to write his poem, The Lonely Isle.

Duties for the young Tolkien included being responsible for maintaining communication between officers in the field and the Army staff who directed battle. His battalion was sent to the Front to join the immense British-French attack that was hoped would break through the German lines, this later became known as ‘The Battle of the Somme’.

According to the memoirs of the Reverend Mervyn S. Evers, Anglican chaplain to the Lancashire Fusiliers:

Tolkien’s time in combat was a terrible stress for Edith, who feared that every knock on the door might carry news of her husband’s death. To get around the British Army’s postal censorship, the Tolkiens developed a secret code for his letters home. By using the code, Edith could track her husband’s movements on a map of the Western Front. 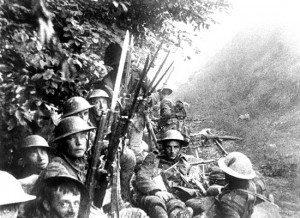 Soldiers of The Somme

The initial British attack on German positions failed to breakthrough and ultimately led to massive losses (20,000 British soldiers dead and 37,000 wounded on the first day). The Battle of the Somme continued for months.

The German lines were pushed back but no breakthrough was achieved. This period of battle saw Tolkien’s battalion embark on two major offences against the German military, both taking hundreds of enemy soldiers prisoner and capturing a trench.

In late October, Tolkien contracted trench fever (a disease carried by lice) and was sent home to recover.  While recuperating in a cottage in Little Haywood, Staffordshire, he began work on The Book of Lost Tales, beginning with The Fall of Gondolin. Tolkien’s illness prevented him from going back to the Western Front, but he had recovered enough to do home service at various camps and was promoted to Lieutenant and later moved to Oxford.

It is likely that Tolkien drew on his memories of the Western Front when describing the lands ruined by Sauron. As he later stated in one of his letters:

The Dead marshes and the approaches to the Morannon owe something to Northern France after the Battle of the Somme.

The deaths of close friends who had nurtured Tolkien’s imagination pre-war years affected him greatly. He continued with his own work so that the legacy of their friendship would not be lost, if only they could have survived to witness his literary success.

One has indeed personally to come under the shadow of war to feel fully its oppression; but as the years go by it seems now often forgotten that to be caught in youth by 1914 was no less hideous an experience than to be involved in 1939 and the following years. By 1918, all but one of my close friends were dead.

— J.R.R. Tolkien, forward to The Lord of the Rings

Many years after the war, Tolkien explained, in a letter to his son Christopher, that some of the earliest development of his mythology and languages took place in canteens, at lectures, in crowded and noisy huts, by candle-light in tents, and even in dugouts under shell-fire (more info).

There are still many existing locations in or near Birmingham which are associated with Tolkien’s life: 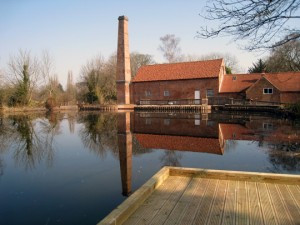 Tolkien based the Hobbits on the rural people and children of Sarehole. W. H. Auden is commemorated in Bromsgrove, a man who had become close friends with Tolkien along with C.S. Lewis while in Oxford. Tolkien’s mother is buried in St Peters church in Bromsgrove. 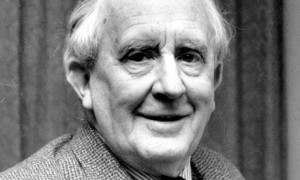 It is possible, that Tolkien’s deliberate delay in reaching the Western Front, allowed him to become one of the greatest fictional authors in English history.

Although he did not relish the thought of going to war, he eventually did and it is possible these experiences helped shape the books he later wrote which have since inspired so many people world-wide, and brought immense amounts of joy in both book and cinema.

There are several societies and book clubs which celebrate Tolkien’s work locally.

In the Hall Green and Moseley areas of Birmingham there are a number of parks and walkways dedicated to J. R. R. Tolkien—most notably, the Millstream Way and Moseley Bog. Collectively the parks are known as the Shire Country Parks. Every year at Sarehole Mill the Tolkien Weekend is held in memory of the author.

Famous West Midland musicians Robert Plant and John Bonham of Led Zeppelin cut their teeth in Birmingham bands during the 1960s. Plant was inspired by J. R. R. Tolkien, with lyrics in some early Led Zeppelin songs. Most notably “The Battle of Evermore”, “Misty Mountain Hop”,”No Quarter”, “Ramble On” and “Over the Hills and Far Away” contain verses referencing Tolkien’s The Lord of the Rings and The Hobbit. “Ramble On” is most obvious with lyrics like: “T’was in the darkest depth of Mordor, I met a girl so fair, But Gollum, the evil one crept up, and slipped away with her“. 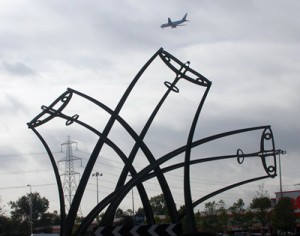 Tim Tolkien is a sculptor and the great-nephew of J. R. R. Tolkien. There are eleven of Tim’s sculptures dotted around the West Midlands such as ‘James Watt’s Mad Machine’ Winson Green Metro station (1998), ‘Lanchester Car Monument’ Nechells (1995), Spitfire ‘Sentinel’ Castle Bromwich (2000) and the gates at RSPB Sandwell Valley.

There are four small blue plaques that commemorate places associated with Tolkien in Birmingham. However, some may argue that Birmingham should do much more to remember one of the city’s most notable authors with no easily visible commemoration within the city centre.

A National Cycle Trail is currently being worked on starting in Staffordshire, cutting through Birmingham and ending in Worcestershire.