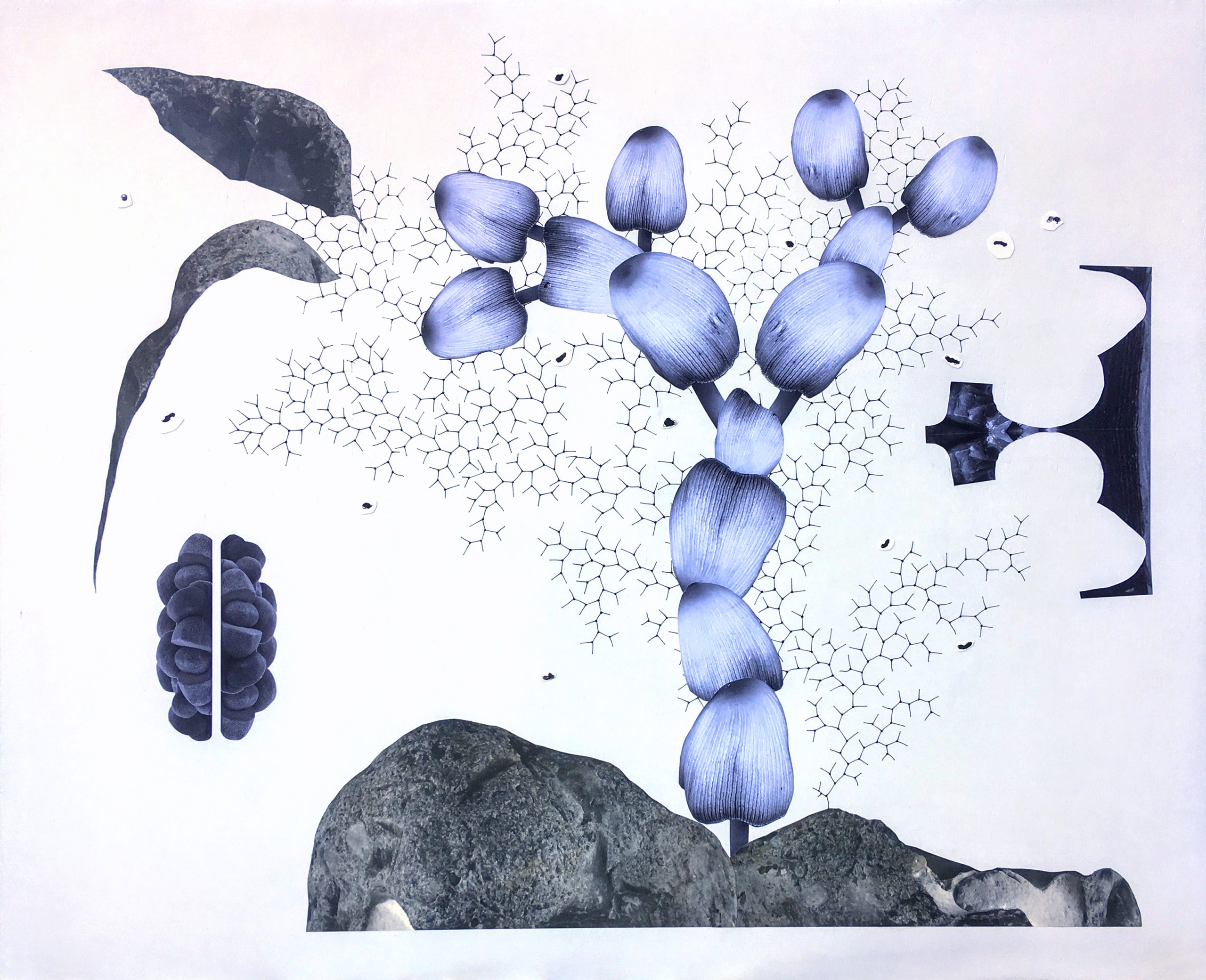 Judith Alder’s Vital Signs reflects the milieu of science fact, science fiction, and some of life’s big questions; ‘where we come from and what we’re made of, and what we know as ‘life’ in the 21st century. Curated by Sanna Moore Director at RBSA Gallery and contemporary art curator, the works shown will include wall-based works, moving image and sculpture.

Judith Alder is a British visual artist with a multi-faceted practice, working across a range of media and processes. Central to her work is a fascination with biology, physics and the history of scientific endeavour and science fiction. Alder is interested in how an understanding of life, its origins and evolution can help us think about the future of our rapidly changing world.

In her first solo show since 2010, Alder assembles a body of connected works grounded in research and inspired by accessible science communicators and visionary writers like HG Wells, Primo Levi, Kazuo Ishiguro and Stanislaw Lem. The work builds on ideas such as Carl Sagan’s proposal that ‘we are literally made of star stuff’ where all the elements which form the planet and everything in it (including us) have originated from a single cosmic event, and that all known life has evolved from a universal common ancestor. Alder is preoccupied with the interconnectedness of all things and the impact of contemporary science now and in the future.

Alder sees her work as a means of exploring and communicating complex ideas. During her project ‘Once In A Universe’ she was introduced to Dr Alexandra Penn, a biologist and complexity scientist from the University of Surrey. Dr Penn has a particular interest in microbes and part of her role at the university involves analysing complex systems (including transport, agricultural and environmental eco-systems) and the impact of change on those systems. Through their discussions, Alder became curious to the idea that a single intervention can have an enormous impact on an entire system, changing multiple factors in a chain reaction.

Judith Alder said: “Having become interested in these interconnections I now see them everywhere in physical, biological, economic, political, digital and social systems (e.g. six degrees of separation, the internet, the Woodwide Web of fungal mycorrhizal networks). All of these individual networks, natural and manmade, seem to be interlocked with each other and economics, politics and environmental issues are good examples of how these interconnections manifest and affect our lives directly.”

Vital Signs comprises works in film, collage, sculpture, drawing and sound. As a body of interconnected works, they query how we feel about science and technology and the difficult ethical dilemmas created through scientific progress often presenting fictitious scenarios, somewhere between sci-fi and fairytale. The media used reflects different stages in Alder’s creative process, where she adopts a continuously repeating cycle of reading, learning, drawing, writing and collecting objects and images. Eventually, a bringing together, assembling and editing of collected material occurs, and something new is created.

Alder likes to administer a sense of humour and absurdity into her work with scale and material. In a project titled, Improbable Experiments With Growing Stones, she explored the improbable and unlikely idea that maybe if given the right conditions, she could find and trigger some hidden life in apparently inanimate pebbles. Her resulting boulders ‘sit somewhere between sculpture and village hall amateur dramatics scenery’ and go on to feature in a new spoof mini-documentary called The Sickness of The Stones which will premiere at the RBSA Gallery. Vital Signs will also feature a series called Signs of Life which tries to ‘bring alive’ drawings or objects through animation, using sound as a ‘slightly comical way of adding to their presence’.

During the exhibition, Alder will do a performance drawing within the gallery, this form of live drawing references Charles Darwin’sdrawing ‘the tree of life’.

Alder said: “I’m going to be making a drawing called LUCA (Last Universal Common Ancestor) based around the idea that all life as we know it has developed from one original life source. I tend to think of this as an endurance drawing, that it will go on for as long, and stretch as far as I can physically manage in the time I have. The drawing grows from a single mark which splits into two branches and each branch continues to split into two. Of course, this can’t go on forever – some areas become overcrowded and the branches die out. In my mind, this echoes the process of evolution where some lines of evolutionary development are successful and others are not.”

Alder is working with Lee Mackenzie, a Birmingham-based artist/poet and member of West Midlands arts collectives Artefact and Walkspace to develop and deliver free family workshops during the exhibition, for children and young people working with older family members. The workshops will extend the themes of the exhibition, working with individuals and groups from the local community to map connections between people, their friends and families, and their geographic links.

She is also working with complexity scientist, Dr Alexandra Penn, to develop an event which will explore the city ‘as organism’. They will also work together towards developing new science partnerships for future research into the use of microbial fuel cells to power artworks.

The RBSA Gallery has recently undergone a complete refurbishment. Located within Birmingham’s historic Jewellery Quarter, the gallery is a short walk from Birmingham City Centre and New Street Station.

Sanna Moore, Director of RBSA Gallery said:  “I’m thrilled to have the opportunity to work with Judith on a solo exhibition. The show will draw together all aspects of her multidisciplinary practice including performance – through which a wall drawing will develop in the gallery over the course of the exhibition. This organic and responsive process is very much at the root of Judith’s artistic practice and will create an exciting dynamic in the space alongside her work in collage, sculpture, moving image and sound.”