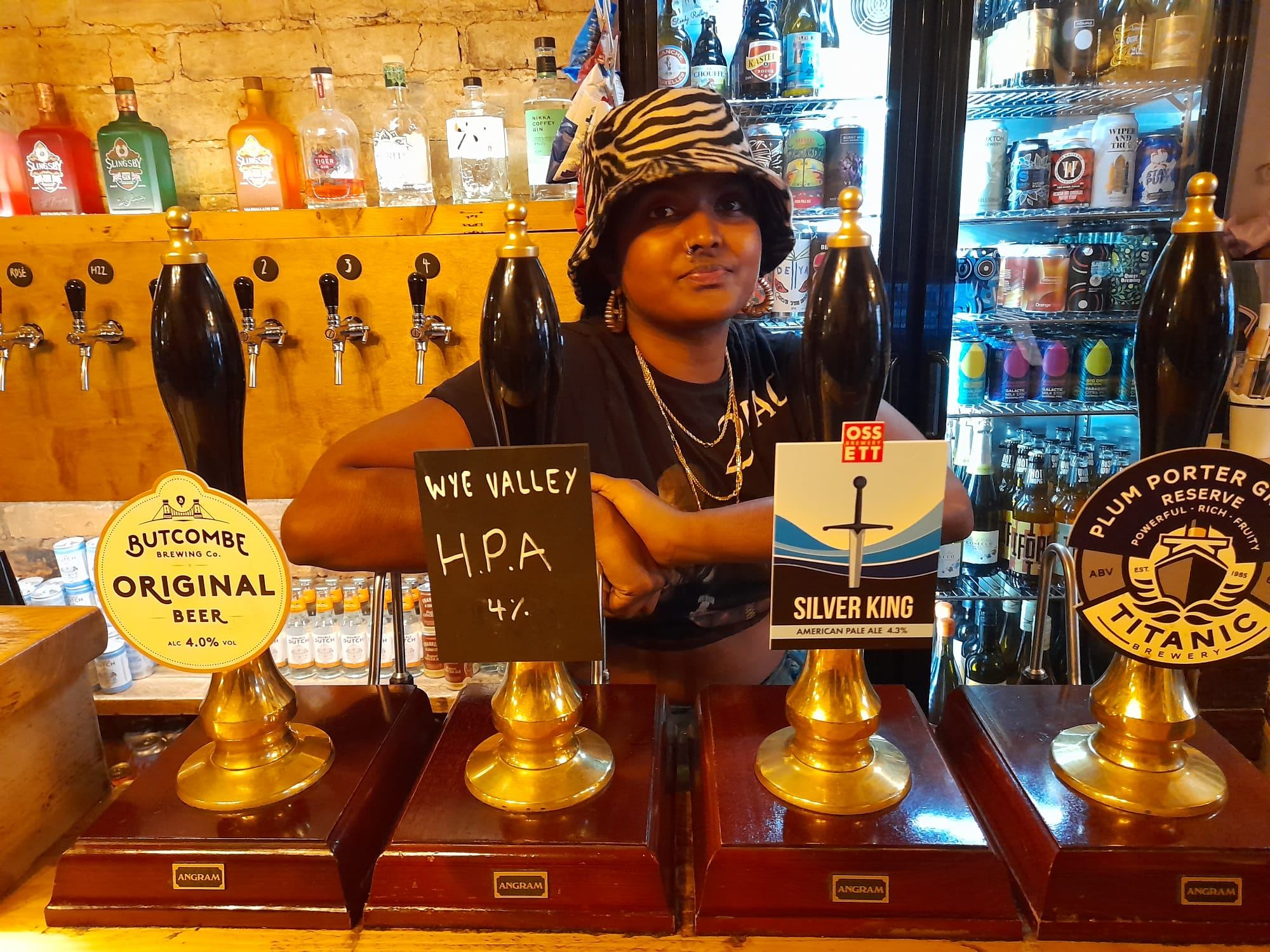 All of the games on our big screen projector upstairs. Rugger and cask ales for the win – what’s not to like?*

GoodGym is a community of runners that combine getting fit with doing good and it’s launching in Birmingham. Those taking part stop off on runs to do physical tasks for community organisations; it’s a great way to get fit, meet new people and do some good. Runs start and end at 1000 Trades every Tuesday. Come on ‘en! Free. Sign up at www.goodgym.org/areas/birmingham

WEDNESDAY 2 FEBRUARY
Birmingham Improv Presents: Maestro 7.30pm Birmingham Improv brings you ‘Maestro’, the exciting elimination improv game where anything can happen. Twelve intrepid improvisers face a series of scenes and challenges, for a night filled with cheer and laughter. The scenes are scored by you, the audience, until only one player remains…the Maestro. Come along and enjoy the ride, cheer for your favourite improviser, and see who will take the winning crown….

Free. Bucket collection if you enjoyed! See more at birminghamimprov.com

Fini Bearman is a London based singer, songwriter, composer & multi-instrumentalist, who has a ‘rare sense of melody running through her eclectic compositions, full of catchy twists and turns’. Her music melds diverse influences from jazz, folk and contemporary music into an ‘arresting and uniquely personal’ sound. Sometimes dealing with settings of poetry and other times original lyrics, ‘her voice, effortlessly moves between a light precision and warm soulfulness is unmistakably her own’.

Fini released her 4th album ‘La Loba in October 2020 and it has already received much glowing reviews from peers and critics including ****’s from Jazzwise (Editors Choice), allaboutjazz, The Arts Desk (album of the year), and more. She is joined by her national support musiccians Tom Cawley and James Maddren. ‘Skilful and accurate… wistful soulfulness’ John Fordham, (The Guardian). £12.50/ £10 members/ £5 students. Tickets via birminghamjazz.co.uk (more on the door)

1000 Trades Presents: Pitch Control 8pm–12am A night of deep, deeper and deepest from the world of upfront new electronic music; expect a journey through time and tempo. From lazy

downtempo and easy grooves, to the slower pitched-down side of house and low-slung disco – all blended intricately to create a unique,

Box of Frogs, Birmingham’s premiere Improv Group, bring you a night of high-octane improvised comedy nonsense, based entirely on your suggestions. Expect the unexpected as quick-witted players conjure up hilarious spontaneous songs, sketches and scenes on the spur of the moment. Free (bucket collection if you laughed…). See boxoffrogsimpro.co.uk for more details

Born in London of St Lucian parents in 1969, Denys studied music at school from the age of 13 and, in 1990, went on to study at the West London Institute (Brunel University). In 1992, he continued his music education at London’s Guildhall School of Music, studying under former Jazz Messenger, Jean Toussaint. From the moment he joined the London jazz circuit, Denys displayed extraordinary talent, energy and commitment. Spotted by veteran Jazz Warriors double bassist, Gary Crosby at the bassist’s regular Tomorrow’s Warriors jam sessions, Denys was immediately invited to join Crosby’s new band, Nu Troop. Since then, Denys has soared in his development as a soloist and bandleader, earning enormous respect from his peers. This gig is his Joe Henderson Tribute

His colossal talent – based on a powerful technique and an ability to improvise fluently and effortlessly across a wide range of musical styles – is matched only by his unfettered energy which takes him and his audiences into the musical stratosphere. An evening with Denys guarantees a display of unsuppressed expression, ranging from sweet “saxuality” to breathtaking, edge-of-your-seat virtuosity. Over the years, Denys has evolved into what the Time Magazine describes as “the icon of British jazz”, with a most distinctive and immediately recognisable sound.£12.50/ £10 members/ £5 students. Tickets via birminghamjazz.co.uk (more on the door)

The Kamikaze Club return for another Open Mic comedy session. Fresh acts looking for a spot, as well as pros looking to shine up their material will be on hand to keep hilarity at a high. Free. More details via facebook.com/TheKamikazeClub

Dreamers is the new project from British saxophonist and composer Mark Lockheart. Stylistically free and slightly psychedelic in nature, the formation of Dreamers signals a new trajectory for the musician who has already featured on a wide ranging and diverse catalogue of albums including Radiohead’s Kid A and Prefab Sprout’s Steve McQueen. As a founding member of Loose Tubes and Polar Bear, Mark Lockheart has often remained ahead of the curve and has constantly explored new directions in his own music. Lockheart’s multifaceted outlook on music is explored through a new set of original compositions with this bold and unique sounding group. Expect urgent, exciting grooves and textures all cleverly crafted together within Lockheart’s unique and memorable melodies. There’s a wide range of influences here, from Ellington and Shorter to John Zorn, the Beatles and even Kraftwerk!. £12.50/ £10 members/ £5 students. Tickets via birminghamjazz.co.uk (more on the door)

Another Sunday Jazz session to please your ears and soul. Hosted by virtuosic young guitarist Alfie Dean and his quartet, they draw inspiration from modern jazz influences including Mike Moreno, Ari Hoenig and Gilad Hekselman, while maintaining the traditions of bebop and its language. All members of the house band are currently studying at The Royal Birmingham Conservatoire and have been performing throughout Birmingham over the past year. Every third Sunday of the month special guests will include up and coming talent from the world of jazz, as well as more established musicians. The initial set will be followed by a jam in which select musicians from the audience will have the chance to sit in with the house band and perform a tunes from their repertoire. Free (donations welcome). See Facebook events page for more details.

Come and enjoy the Birmingham Improv Comedy Jam – an evening of fun for all. Turn up. grab a drink, put your name in a hat and perform! Or just watch if you prefer. With a different improve group invited to perform each month for the first half, with a jam hosted by residents Box of Frogs in the second. Come and play your favourite improv games, take part in improvised scenes, sketches and songs – or just sit back and watch. Suitable for all levels of experience, including complete beginners. Free (donations welcome). See Facebook events page for more details

Another outing for monthly meetup hosted by JQ face Kirsty Smith. Social Circle was born from monthly get-togethers between friends, where

they’d gather round with a few drinks and chat about the latest in social media marketing. Everyone welcome. Free. See @socialcircle on Twitter for more detail.

Dealing in deep cuts and soulful sounds, Moa Bay brings a passion for house music to his sets that is paralleled with a wide range of styles and influences. His selections transform into sets with mellow keys, funky guitars & emotive backdrops all over a pumping kick drum. Though he loves crafting sets and house tunes, his love of music goes far beyond mixing and producing. Being a professional drummer, tutor and avid record collector, he has found more ways than one to express himself through music. Free