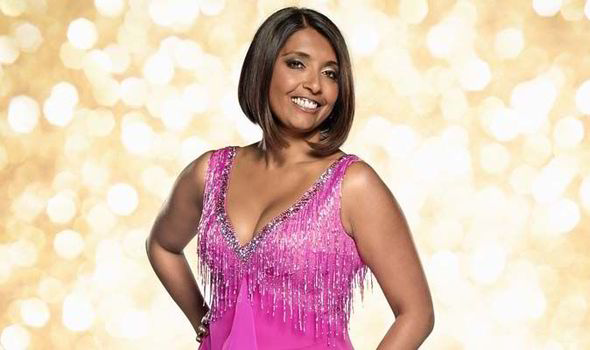 The world’s largest family history show Who Do You Think You Are? Live will be returning to the NEC in Birmingham this April (6-8) for its 11th year with the help of former Strictly Come Dancing and Casualty Star Sunetra Sarker, local historian Carl Chinn, and Sir Tony Robinson as well as DNA expertise, military vehicles and a 1940s sitting room.

The show invites beginners and experienced family historians to discuss their family history research with a range of genealogy experts and industry leaders. The event will see over 130 of the top exhibitors and local family history societies descend on the NEC from all over the world to share their expertise and provide access to their billions of genealogy records.

On Thursday (6 April) there will be ‘unseen footage’ and a chance to meet the team behind the popular Danny Dyer’s episode of Who Do You Think You Are? The session will reveal the surprising twists and turns that Danny’s research took, from his working-class roots in London’s East End to a stately home and the heart of the Tudor Court.

The matriarchs from the hit BBC Two series, The Victorian Slum sees Mandy Howarth and Heather Potter present at the show on Friday (7 April). They moved their families into a poverty stricken Victorian London where their genealogy became a reality. They’ll talk about what life was like in the slum, their motivation, what they learned and what it means to really explore the day-to-day life of your ancestors. To put it all in context, they’ll be joined by local historian Carl Chinn who also appeared in the series. Sir Tony Robinson will also be attending the show on Friday 7 April, hosting a talk with the Ancestry team and meeting visitors on the Ancestry stand.

Celebrity Saturday (Saturday 8 April) will welcome Strictly Come Dancing andCasualty Star, Sunetra Sarker. Guests will have the opportunity to hear about her Who Do You Think You Are? Journey and ask questions about her experience. In Sunetra’s episode she reconnected with her Bengali heritage and discovered her family connections to the most turbulent episodes in India’s history.

My experience on WDYTYA was a gift of a lifetime. To be submerged in a family history I had never cared to know about opened my eyes to the strength of characters that had been in my family…..I look forward to sharing my thoughts with the audience at the Live Event.

As well as all of this, Dig for Victory will also be bringing history alive by depicting Home Front Britain during WWII with a mock-up of a 1940s sitting room for visitors to experience. This will be complete with period furniture, 1940s music and a rare Morrison shelter. These shelters were common place as work benches after the war, the majority of which have now been scrapped.

Sponsored by Ancestry, Who Do You Think You Are? Live offers workshops, speakers and a huge range of experts to create a one-stop shop for the 13,000 family historians who will descend on the show again this year.

Visitors will also have an opportunity to have family treasures dated by Antiques Roadshow experts Eric Knowles and Marc Allum. There will be plenty of other experts on hand to help with dating photographs, and a dedicated military area offering advice to those researching ancestors involved in conflict.